Happy Birthday to My Country... 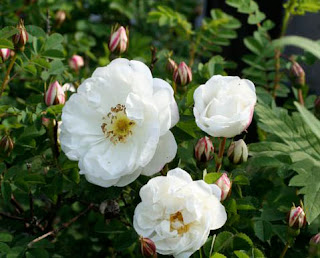 How'd we get here again already? It's Canada Day, formerly known as Dominion Day...which is what this rose was called by the man I bought it from a few years ago for the huge sum of 5 bucks. I recognized it as being a R. pimpernellifolia species, but beyond that wasn't sure what it was. He called it Dominion Dy because the buds are red and white striped, and because in his garden near Annapolis, it always begins blooming on Canada Day. As you can see, it's right on schedule--I went out a little while ago and found it beginning its floral fireworks. 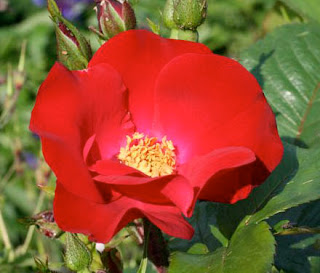 Let's continue with the red and white theme a bit, shall we? Here is 'Robusta', a fantastically tough and floriferous performer in my garden. Yeah, there's an aphid or two lurking around. I don't fight aphids. The ladybugs do that. 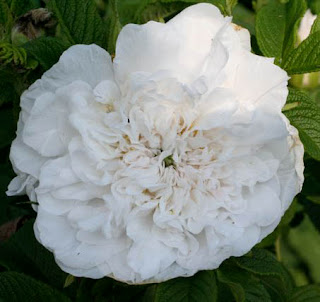 This old rugosa is Souvenir du Philomen Cochet, a favourite of mine for its quartered blooms, even though it invariably browns on its edges and turns to soggy kleenexs in the fog. 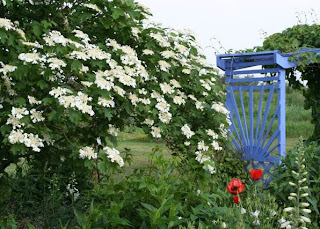 The highbush cranberry (Vaccinium trilobum) is having a spectacular bloom this year. And the foxgloves are just coming on, the oriental poppies (though scarlet rather than red) are still doing their thing, and we have a wee nod to our southern neighbours here with the red white and blue motif. 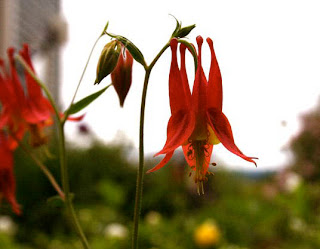 Okay, this isn't as red as it really is, but it's the best I could do. The Canada columbines are doing very well this year, and make the hummingbirds really happy, too. Of all the columbines that festoon our place, this is the one I hope spreads itself like crazy (at the moment we have one good clump, established last year) because it's a native and it's just so beautiful. 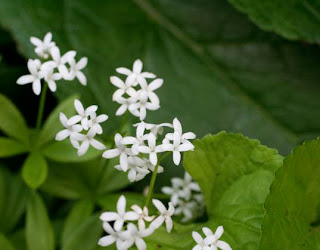 Sweet woodruff (Gallium odoratum) is a dandy groundcover, sweetly scented and great for shady areas. I let it run where it wants under the spruce trees, and once I get the mess under the birch trees under control, I'll be transplanting some of it to keep the hostas company. 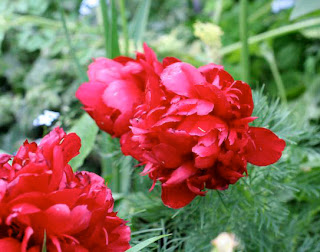 Our double fernleaf peony is finished flowering (the big wind on the weekend sort of discouraged it) but its foliage will continue to delight for the rest of the season. 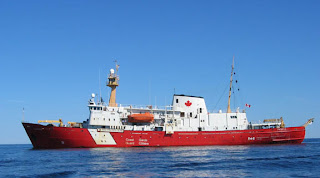 Well, this is a strange looking flower, isn't it? Hmmmmm. I took this photo of the Canadian Coast Guard science ship Hudson three years ago during one of my trips, and it's one of three CCG ships that I have framed and hanging on my office wall. I look up at those photos daily and think about how much I love my country, the water that surrounds it, and what I do for a living, telling stories and learning from others. It's about time I dug out my CCG passport and went with them on an adventure, too. We'll see what the year brings. 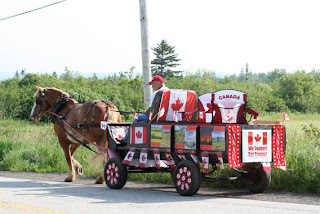 Whooops, there goes our neighbour with his horse, on their way to the big parade in beautiful downtown Scotts Bay...guess it's time to put on my red tshirt and white shorts and go down and take photos for that!

Happy Canada Day, all...travel safely, enjoy your loved ones, and celebrate that we live in the best country in the world, and have the bestest neighbours, too!