A Walk Through Baldwin Nurseries 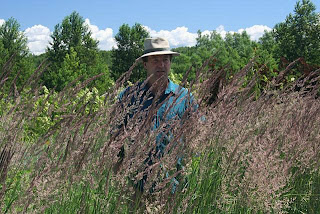 There are very few people who can get me up and going when I'm sick. Especially if it means getting in the car on a hot day and going for a drive to another county.

Good thing that Robert Baldwin is a buddy of mine as well as a nursery operator. He called several days ago when I was really in the yuckies, and I hadn't called him back. I was working in my office this morning when the phone rang, and I felt guilty because I hadn't returned his call. So naturally, I answered. And feeling guilty because I hadn't been down to visit in at least a month, I put on some sunblock, drank some gingerale, and told LSS I was off to photograph Rob's nursery again. 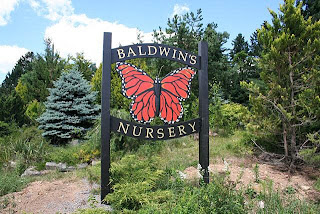 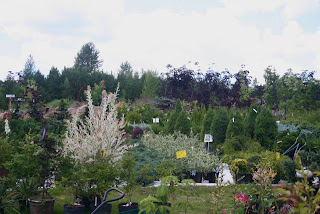 I've said before that Baldwins is one of my favourite nurseries, but friendship aside, if you've ever been there, you know why. The plants are just SO healthy and well cared for. And profuse. Lots and lots and lots of healthy, well-grown shrubs, trees and perennials. In the past couple of years Rob has, like many of us, become concerned over pollinators, and he's brought in a lot of pollinator-friendly perennials as a result. 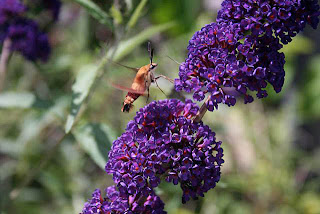 We spent quite a bit of time with our noses in the buddleia, and then spied three or four hummingbird moths. I then spent the next twenty minutes almost standing on my head to get a few good photos of these unusual, graceful creatures. 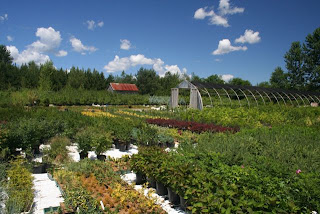 Then it was time to walk around the nursery and resist temptation to bring every plant home with me. 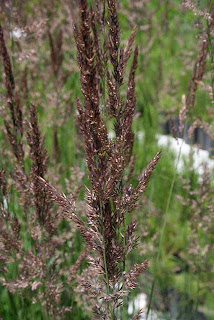 The Karl Foerster feather reed grass is blooming marvelously right now, and the flowers are a lovely rosey-green. Watching them en mass is especially appealing, as they move just like an ocean wave. 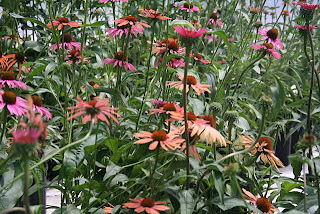 Of course, when we arrived in the greenhouse where Rob's coneflower collection is, I was a goner for good. Of all perennials, these are definite favourites. And they do well for me, which makes me even happier to add half a dozen new ones to my collection. 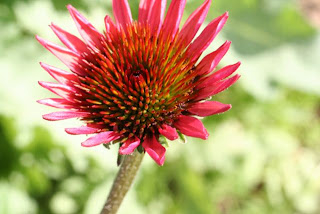 Little Giant is one of the more compact cones, but has a rich colour to its flowers, which grow on strong stems. 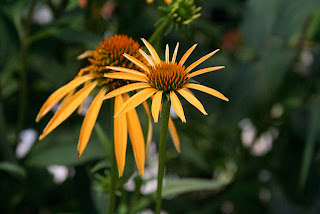 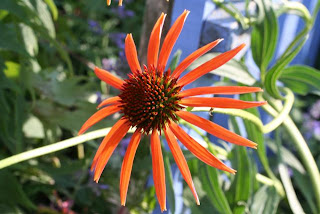 And this is Orange Meadowbrite, the first of the coloured cones I saw, back at Canada Blooms a few years ago. 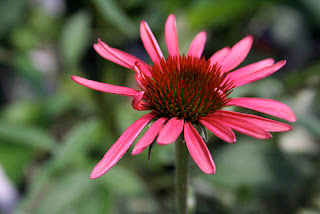 Big Sky Twilight is one of the deepest-red-rose of the true 'purple coneflowers', and its richly coloured centre cone is pretty handsome too. Some of the cones are fragrant, but with as many in the car as I had, I didn't stop to check them all out--yet! 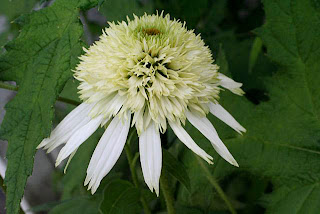 This IS fragrant. I know it's not going to be to everyone's tastes, but I've been wanting Coconut Lime, and the first one I got died--it was a bit of a spleeny plant when I purchased it, and the nursery I purchased it from is a reputable one that I frequent a lot, so I simply got a different plant and carried on. This new one I got from Rob is very vigourous and I just have to decide where to plant it. 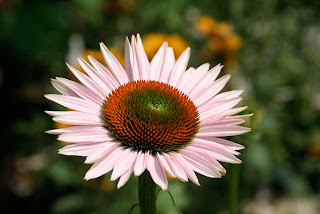 I had read about 'Hope' and forgotten about its story til Rob reminded me. I went to the Terra Nova website, and sure enough, here's the story:

Calm, fragrant, soft pink flowers of great size, fragrance, and substance adorn this long blooming perennial. It is dedicated to the breast cancer survivors and the memories of those who have succumbed to breast cancer. Terra Nova will make a donation of $.25 for each plant sold, to the Oregon & SW Washington affiliate of the Susan G. Komen Breast Cancer Foundation to help further the search for a cure for Breast Cancer.

I'm going to be putting this echinacea in my memory garden for Marilyn, my former mother in law, and though it's called 'Hope' I've nicknamed it 'Living on a Prayer' coneflower. Let's hope there IS a cure someday soon--for all kinds of cancer.

That's my thought for today!