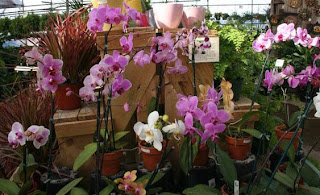 It's been one of those weeks around here at Sunflower Hill, as the weather tries to play coy with us. And I confess to some decidedly moody moments this week, ranging from angry to discouraged to just plain sad.

Angry because of a new 'gardening blog' that basically wants to take advantage of others' work with no benefit to the participants who join the 'team'. I'm not going to post the link because they'll get no free promotion from me.

Discouraged because winter seems never ending. We got another six inches of snow yesterday, as did some of you in the US and points further west in Canada--talk about being weather-bludgeoned.

And sad because today should have been my parents' 50th anniversary. Would have been, had my father not been taken from us nearly three years ago by Alzheimers Disease.

Normally I'm a glass half-full kind of girl, rather than glass half-empty...but these things have been bothering me. So when the going gets tough, what does the tough do? 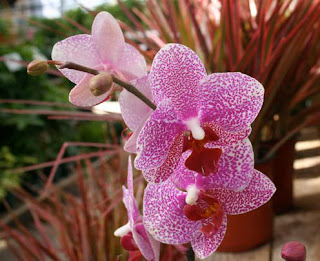 Go looking at plants, of course. In this case, the orchids I've been thinking about for the past week or so, ever since I saw a nice collection of phalaenopsis in a farm market/nursery just after St. Patrick's Day. Just walking in the greenhouse, listening to the fountain splashing and the birds chirping and smellng hyacinths and daffs and soaking in the smell of green, growing plants is enough to raise my spirits.

Just why is this Kylee's fault? 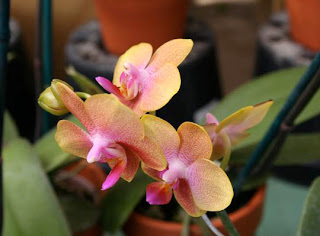 Weeeeellllllll....she did a delightful post just yesterday about how we all know that she loves cats and plants. And she was faced with temptation: to choose a pretty cat that has been hanging around her place, or a pretty new orchid she's been thinking about getting. She asked which we thought she had chosen, and many of us, knowing and loving our friend as we do, said, "Both of them, of course!" 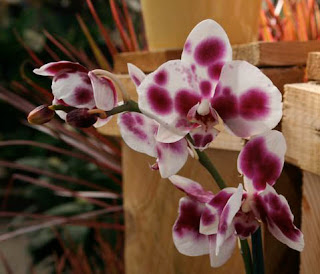 And I confessed to having had visions of a new phalaenopsis in my house. And she said

Go ahead, Jodi. You know you want to, and I'm giving you permission. :-) 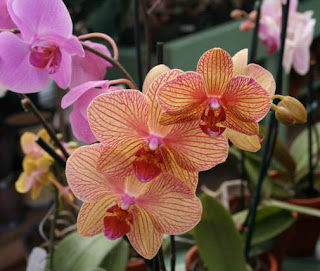 It was hard making a decision for just one; several of the unusual ones had me REALLY tempted, but the greenhouse at this market isn't really designed to be holding plants this early in temperatures this cool. While there is heat in there, some plants are showing signs of distress, and are getting overwatered, over fed, etc to try to snap them out of it. Which we know won't work, so it really was my duty to rescue this beauty, wasn't it?

Now, I realize that in Kylee's case, she opted for both choices, and she did give me permission to do so too. But I avoided our kitty shelter today, just to be on the safe side. When I went down to the barn where my longsuffering spouse is working on his boat, I met this handsome, charming fellow, who LSS has been telling me about for weeks. And it was all I could do not to pick him up and bring him home. Newly neutered, sweet tempered, purrs as soon as you touch him, wants to be held all the time, and a 'talker' too. 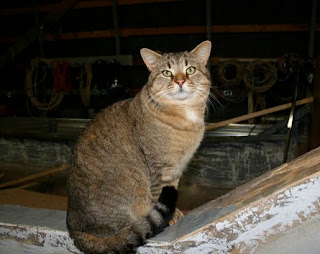 I think his parents would object; and I know our catchildren would. So I resisted temptation, halfway, anyway.

This must qualify me for that second orchid, right?