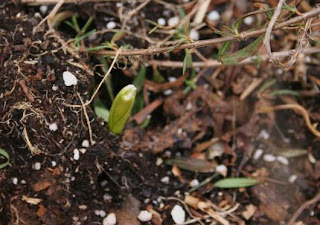 While our up and down weather continues, I found things yesterday that gave me great hope. A little stroll around the squishy-in-places, frozen-solid-in-places yard showed that the parts that have emerged from the snowdrifts do know what they're supposed to do. Yes, I know it's not the most beautiful flower image you've ever seen. But it's a plant sprout--maybe a snowdrop, maybe puschkinia, maybe crocus or iris reticulata--and it's up and ALIVE! Whoo Hooo! Even though Farch has yet many tricks to play on us, weatherwise, this brave shoot reminded me that we'll make it. 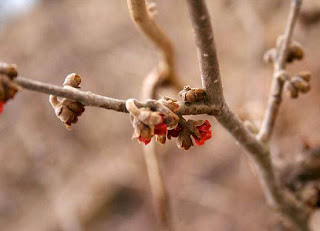 I was even more excited to find that Hamamelis 'Diana' was opening its buds, letting the long, tentacle like petals of its flowers shake out slowly. These remind me of the pompoms we used as cheerleaders in high school, as they look very much like crumpled, folded tissue paper. The fact that 'Diane' is flowering suggests to me that I ought to take to the woods and see if our native hamamelis is flowering or not--you can usually smell its flowers in the woods before you ever locate the modest looking flowers and twigs. 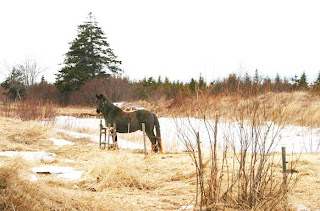 I spent some time watching my ham-horse, Leggo-my-Eggo, who doesn't care if it's muddy, or windy, or cold, so long as he has hay to munch on and his donkey to tease. It was especially poignant watching these two happy, if muddy, fat and fuzzy creatures, given that I'm currently working on a story about an appalling case of animal cruelty in Alberta. Thank heavens that the SPCA was able to execute a search and seizure--there will be a happy ending, eventually, for many of the horses and other animals they rescued. For the many dead animals, it came too late--but I am so glad the SPCA was able to get in, and that so many have come forward to help with the animals' recovery.

I'm running a bit behind, as last night we had an abrupt and tedious power outage here which went on until into this morning. This would not normally bother me even one iota. However, at the time I was downloading the upgrade for my MacBook Pro's operating system, and it was in mid install (directly while downloading, near as I can tell) when the power went out. Including, of course, the Internet. So this morning I had to do a complete reinstall of my operating system, which always takes time. With deadlines up the wazoo and research to do, I haven't been able to comment back to posts, or visit others, or even check my email until a couple of hours ago. So if you've been expecting to hear from me, it'll be soon. After I get a decent sleep, that is. And I'll get to the next container posting by the weekend, if nothing else goes awry here. It's acting like Friday the 13, not Thursday...