Love them & Leave Them: Tricky Plants I Enjoy Tormenting Myself With 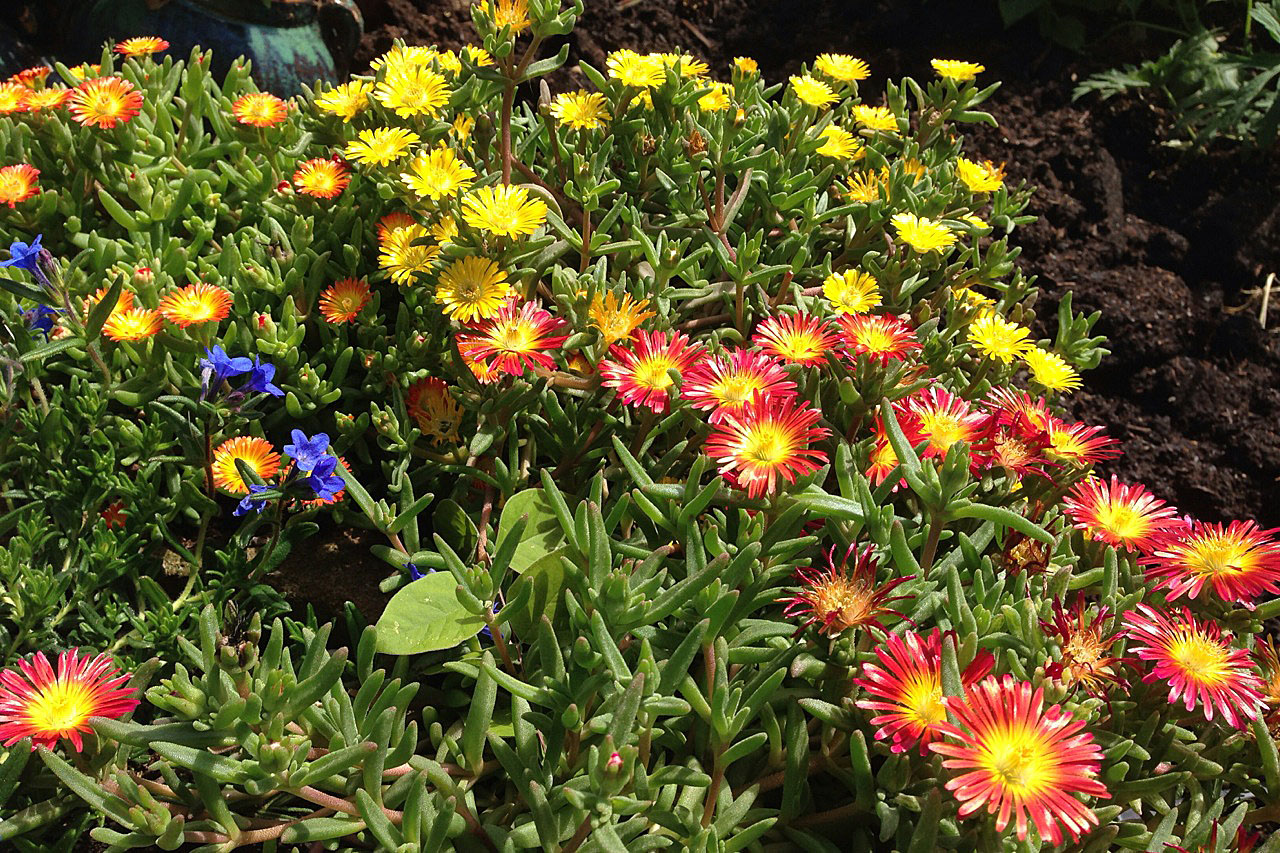 We all have plants that give us challenges. The dry-soil loving perennial that pouts at cold wet clay soils. The blue poppy that wants exactly what it wants or it will die without blooming. The yellow hollyhocks that taunt us by blooming any other colour but yellow. The zone 7 plant that we try knowing full well we are a zone 5b, MAYBE 6a with winter protection...

You get the picture. And I know you have had the plants. And the challenges. And the losses. I have absolutely no idea how many plants I've killed over the years, but I am quite sure it is hundreds, if not thousands. (Not including annuals, or even houseplants!) 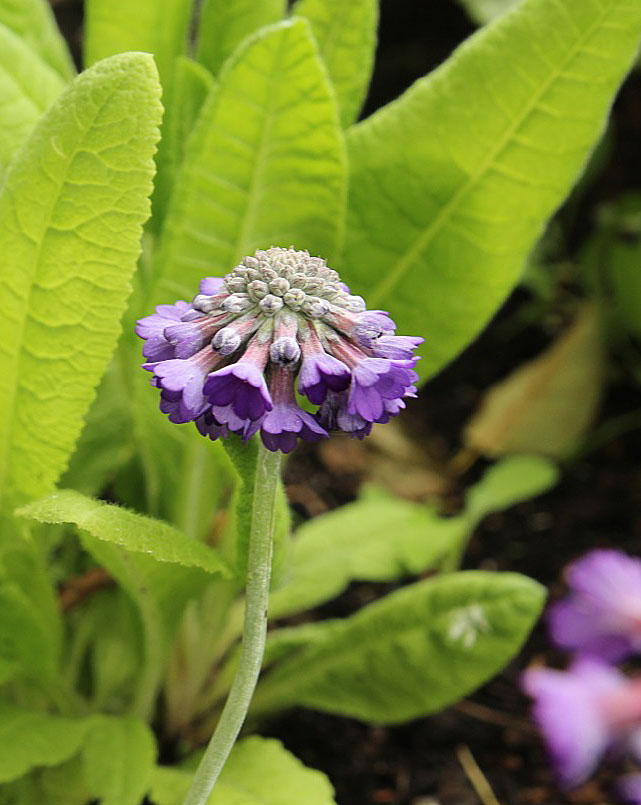 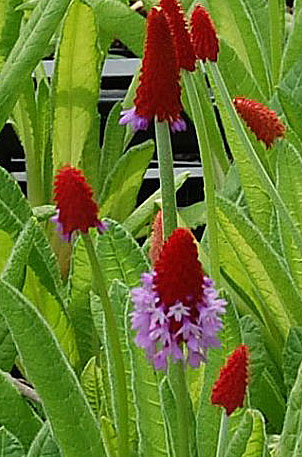 However, although my new garden is much smaller than my former one, and so I have to be selective about what I choose to plant, (and do a lot of containers). But there are certain plants that I just enjoy so much, even though they may not come back for me, that I just have to have them if they can be purchased for just a few dollars. There IS one exception in this list, but you'll see it when we get there.

We'll start with Primula capitata 'Noverna Dark Blue'.  (left photo) I decided mine had NOT come back, so I bought another one. But what surprised me was that Primula vialii (right photo) survived the winter and has returned. So you really do never know. 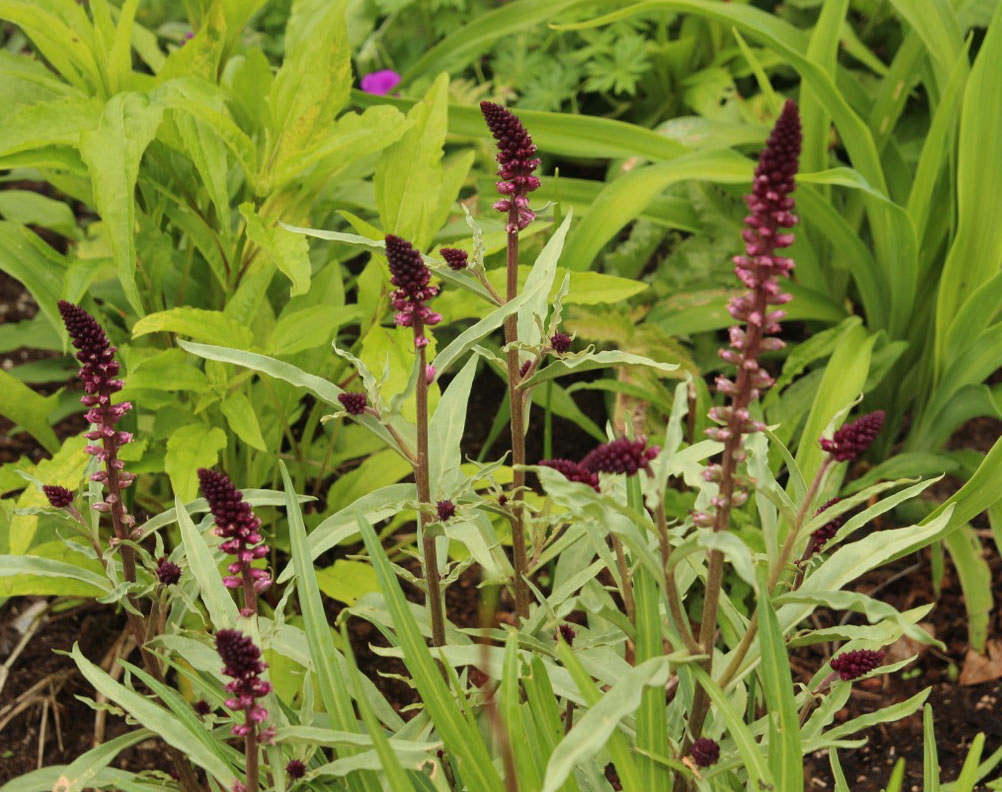 Many of the loosestrifes (Lysimachia) are rambunctious to the point of invasive, including the gooseneck Loosestrife, L. clethroides. I managed to kill that several times in my previous garden, but I suspect it would do well here so I am resisting it for now. However: this is L. atropurpurea 'Beaujolais', which I see is now being listed as a short lived perennial or even biennial. I have probably killed it at least three times in the past, including over winter here in this garden. I do not care. I bought a plant for 6 bucks a couple of weeks ago and planted it near chocolate cosmos, mourning widow Cranesbill, and a 'black' flowered knautia or scabiosa (I forget which). It will flower all summer, and then if it goes to sleep, I'm okay with that. I've read that it may self-seed, but I can't remember where I had it planted last year so I can't check that out! 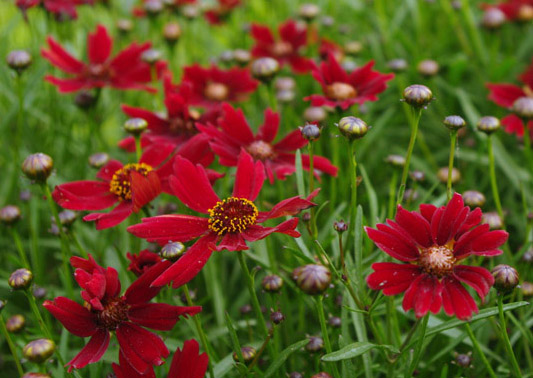 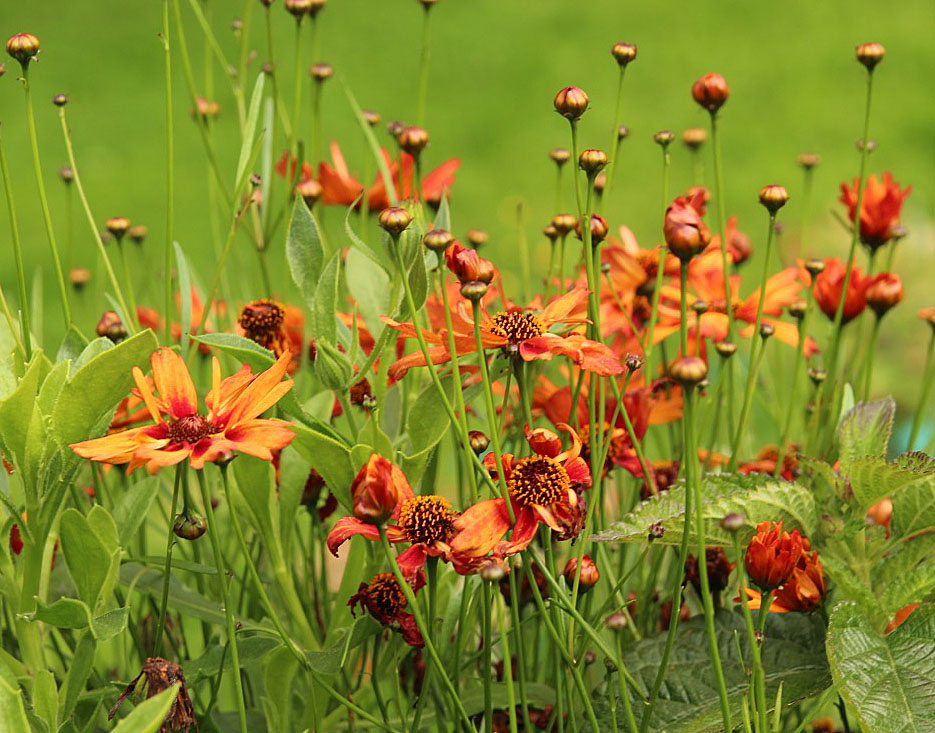 Plant breeders are getting smarter about their new releases that aren't so hardy. That's the case with a number of coreopsis cultivars. Remember Limerock Ruby? We all loved it when it came out and it was listed as being zone 5...not on this planet! (it's now listed as zone 8). Well...the breeders are now marketing some of these less hardy varieties as annuals, and I picked up two of them: Cherry Pie and Pumpkin Pie, both for 4 dollars each. They are extremely floriferous, I have them planted in windowboxes and in my cutting area, and once they are done, they may go to sleep. I DO have Mercury Rising, from the Big Bang series, overwintered and growing well in an excellent drainage area, so maybe I'll try one of the other iffy varieties near it. 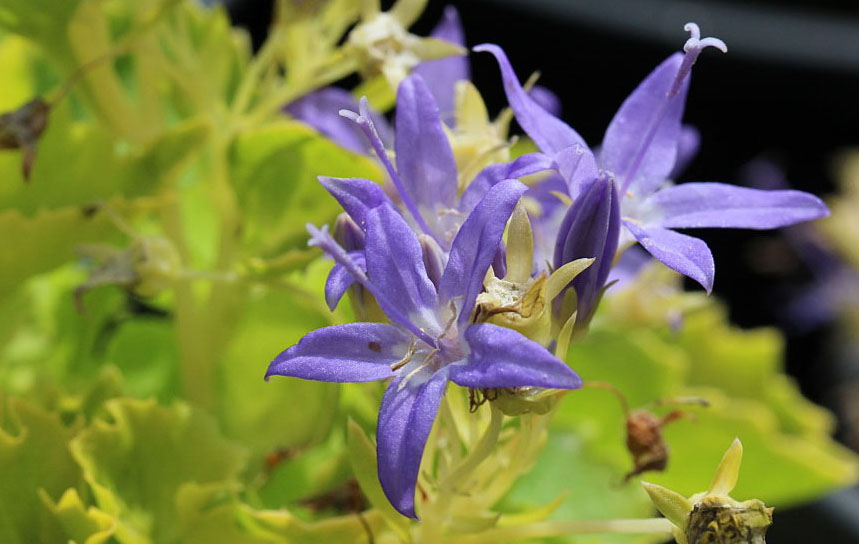 I love this campanula, 'Dickson's Gold', although it has taxed me over the years. I did finally get it to overwinter and grow well for me--the summer that I was leaving my former garden, and I left it behind. I thought about it a lot last summer, and I've planted it in the excellent drainage area now so we'll see how it does. 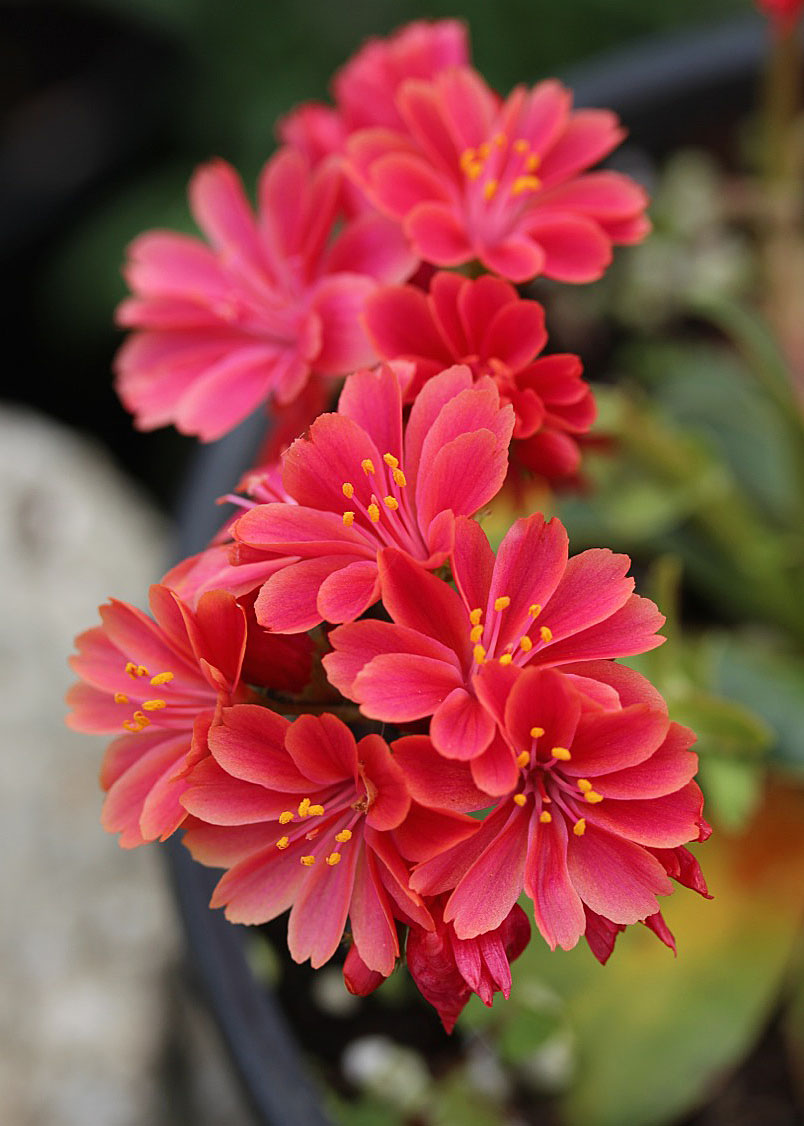 Lewisias are problematic for a lot of people, because they want absolutely perfect drainage, and if they get soil and water splashed on their leaves, the leaves will rot. If the overwintering conditions aren't perfect, they will rot...you get the picture. Interestingly, I have had numerous varieties overwinter--Little Peach and Little Plum being two of them, and another being from the Rainbow Mix. So I got cocky and bought this incandescently hot pink one, plus Little Mango, which is golden. We'll see how they do. I have them planted in troughs and my tiny alpine bed that is under construction, where they will get the drainage they want, and have them mulched with coarse sand/grit to keep the soil from splashing on them. 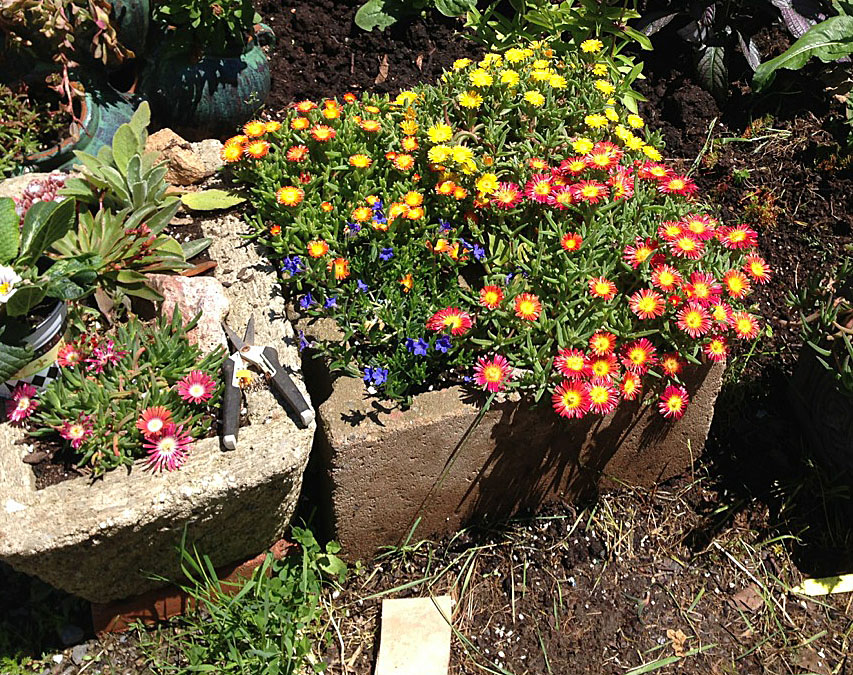 Also challenging for many gardeners are the so called perennial ice plants, not to be confused with the annual Livingstone Daisies. These ice plants are so, so seductive--just look at those blazing colours, and the masses of flowers they produce. I've had the common yellow and magenta perennial forms overwinter for me in the past, and I've got these planted in troughs and in cinder blocks where they can drain beautifully. We will see how I fare with these. Among the cultivars are 'Red Mountain', 'Garnet', 'Firespinner', 'Orange Wonder', 'Golden Wonder', and 'Fire Wonder'. 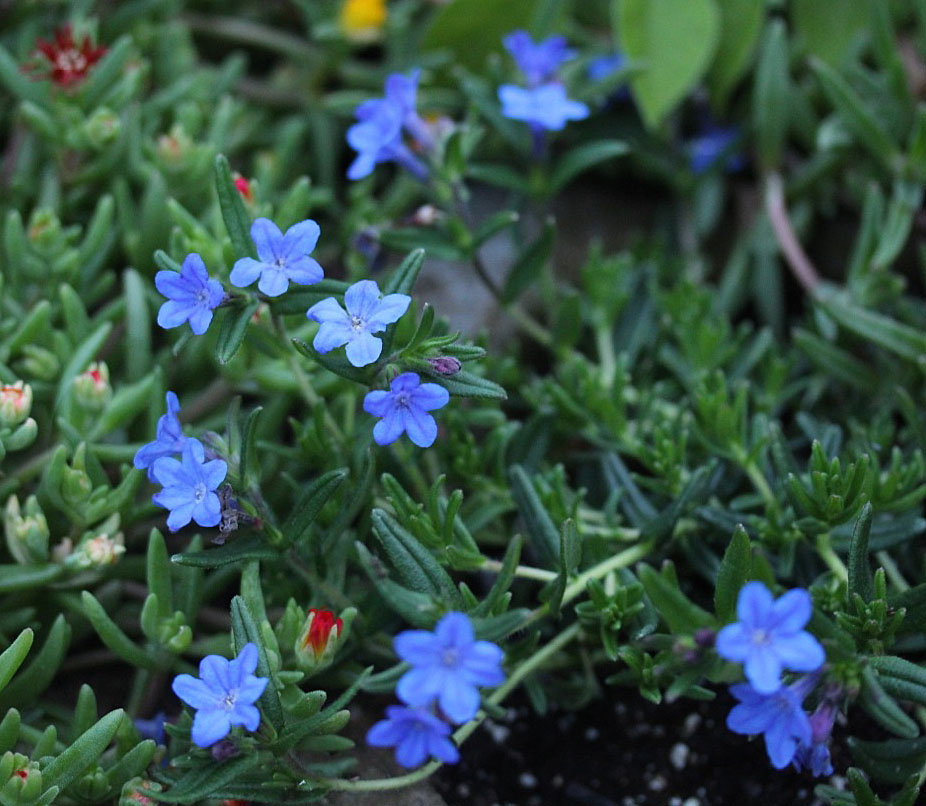 This is the blue-flowered plant you might have noticed in the previous photo. It's not an ice plant, but a relative of pulmonaria and borage, Lithadora, or blue lithospermum. However, it's cranky about overwintering, again because it wants a welldrained location--and it also wants acidic soil, like rhododrendrons, heaths and heathers. So I have it planted in a cinderblock and we'll see whether it survives or not. I genuinely am okay with it just enjoying its summer and then going to sleep, but I know other gardeners in Nova Scotia who have had it overwinter, so why not give it a try, says I? 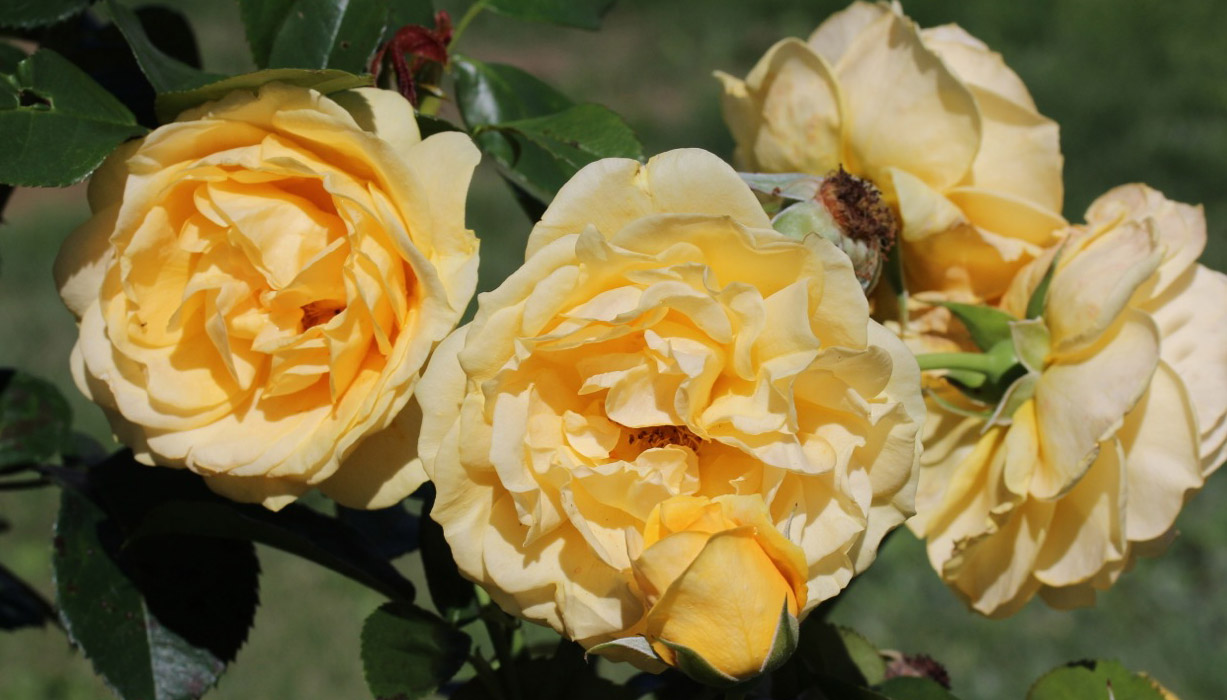 We all have our weeknesses when it comes to plants. Mine is David Austin roses, which are everything a rose should be--floriferous, fragrant and gorgeous. I lost two over winter--Graham Thomas, seen here, and a pale yellow one called Crocus. However, Abraham Darby and Golden Celebration both survived nicely, so I decided to buy Crown Princess Margaretha, and if she survives, fantastic. She's on a graft, so I've sunk it well, and will bury it further come fall, and we'll see. Because once you've seen and enjoyed an Austin rose, you're smitten. Obviously roses cost more than 6 dollars, but I figure if I get 4 months of blooms (Abraham Darby and Golden Celebration were still pushing buds in early November), I've gotten my money's worth. 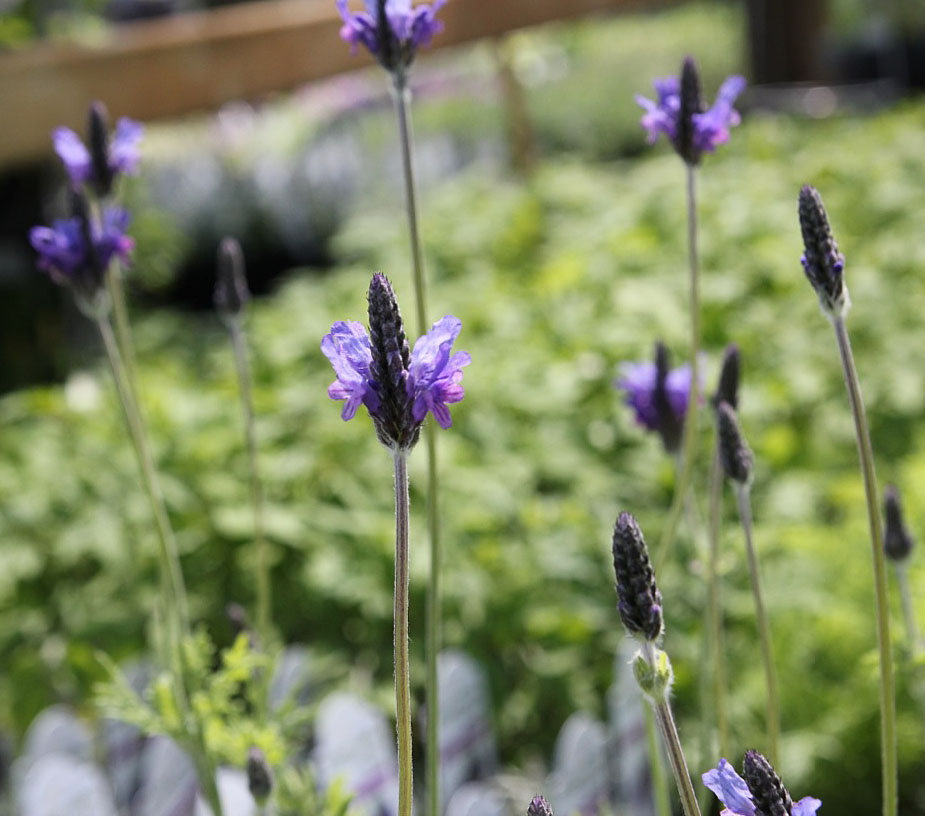 Lavender is my favourite fragrance, providing it is real essential oil and not 'parfum', as so many cheap creams and soaps etc are made with. Lucky for me, we have numerous companies here in Nova Scotia that make great lavender products. And three lavender plants from last summer overwintered for me. This one, a type of Spanish lavender, did not--but it's sold as a herb for like 3-4 dollars, so I bought another one, plus five other types of new to me lavender, plus half a dozen Hidcotes and Jean Davis, a pink flowered form. Again, some will survive, and some won't. And I'm okay with that. 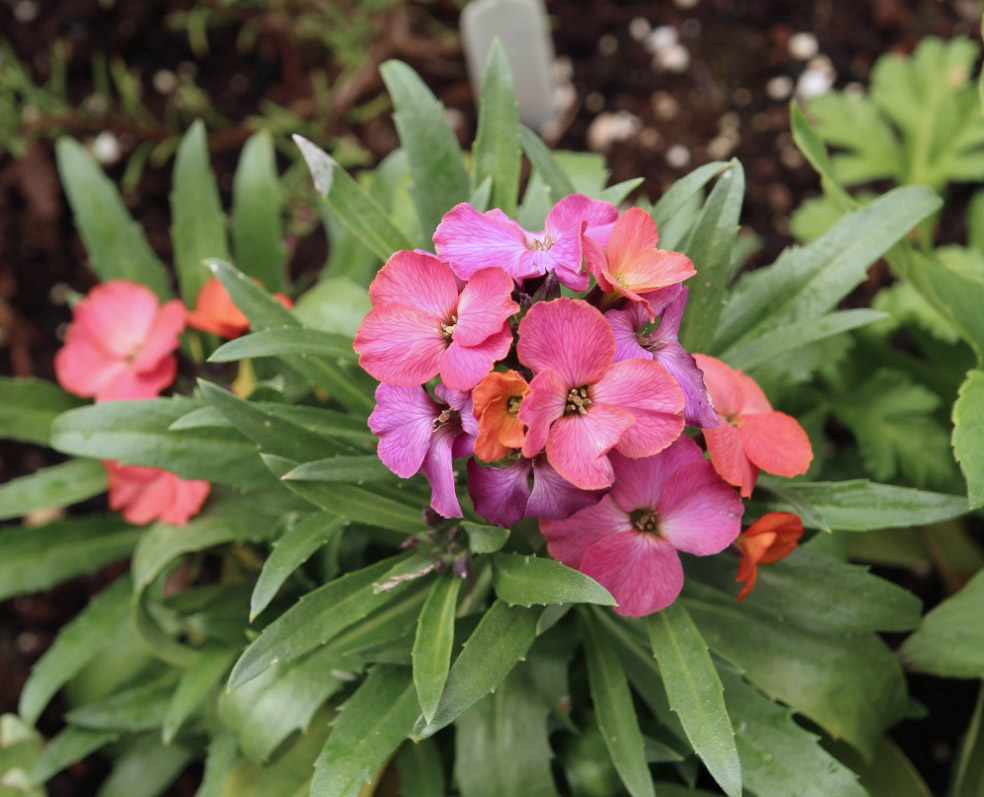 I wish more nurseries carried or grew wallflowers (Erysimum). Some are hardy, some aren't. Some are biennial, some will self seed. All of them are fragrant, and the Winter series is spectacular, with large flowers, lots of stems of buds, and best of all, flowers that change colour. LOOK AT THIS. This one is called Winter Orchid, with flowers that start orange to red to pink to orchid purple. I only have one plant of this variety--but I have three Winter Sun, which are shades of yellow, plus four of the stalwart orange variety. Lots of fragrance going on in my garden, and if they bloom themselves out, I'll hope to find them again next year. 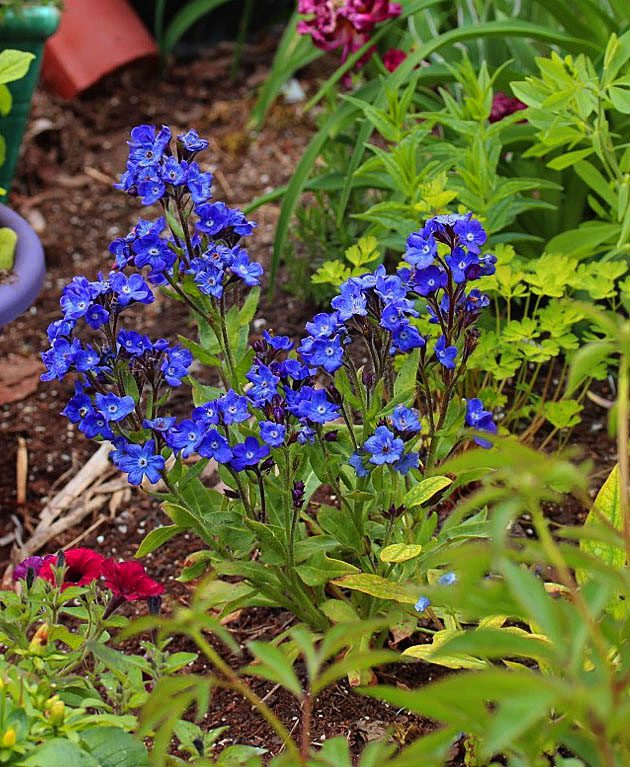 This is another relative of lithadora and pulmonaria, Anchusa 'Lodden Royalist' also called bugloss (one of numerous plants with that common name) or blue alkanet. I have never been able to get it to overwinter OR to self-sow, and it often just dies away towards the end of the summer, but I still look for it every year so as to enjoy those rich blue flowers. If it has blue flowers, I will make all kinds of excuses to justify having it. We know that. 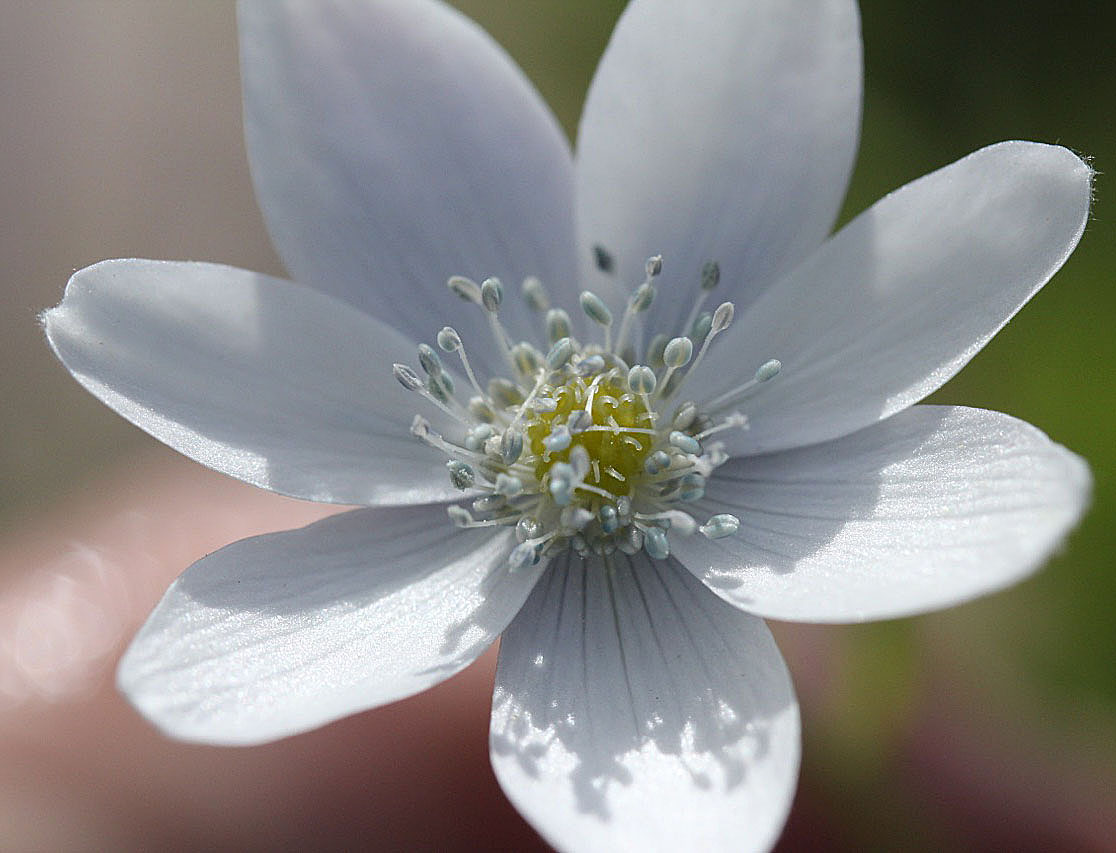 Sometimes we purchase a plant, expecting to enjoy it and then have it go to sleep, and to our surprise it overwinters. That was the case with this woodland anemone, Anemone leveillei. I bought it last spring because I was enchanted by the delicate mauve-blue on the backs of the petals and in the veins, as well as the blue-grey stamens. Didn't expect it to overwinter but planted it in the well drained woodland garden area, and what do you know--it's back and looking great.

So the moral of this long meandering post is, if you enjoy plants but they are supposedly divas, try them anyway if you can easily source them and they aren't expensive. You'll get a season of bloom from them, as we do our annuals, and they might surprise you, too.

Except yellow hollyhocks. I have finally given up on those.