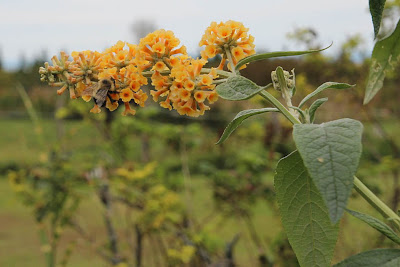 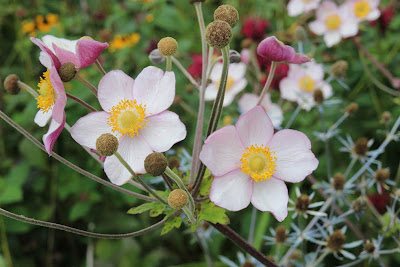 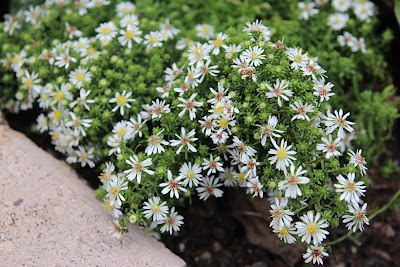 Assuming life settles down this week, I do plan to resume posting more regularly than I have been doing, although I did muse aloud on Facebook a couple of weeks back that I wondered if a garden blog is doing much use to readers. There is just so MUCH material online now, and so many social media options, that I think people are getting stressed out and burned out trying to keep up with what everyone else is doing as well as doing their own thing.

The photo above is of Aster ericoides 'Snow Flurry', an amazing dwarf, groundcover-like aster. Not as showy as some, but spectacular never the less. 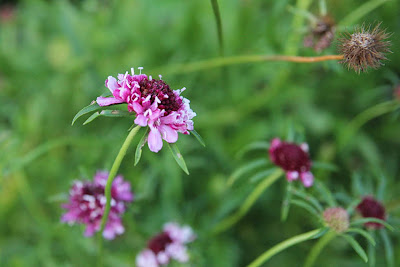 The Internet is still very much a work-in-progress, and in the years I've been active with it, I've seen many fascinations come and go. Will blogging disappear? Hard to say. I hope not, because it is a great way to make friends, share information, and even network professionally. I think it's more useful in some ways than Twitter, but each social medium has its own niche. Some flourish, like this Scabiosa 'Beaujolais Bonnets' seems to be doing in its second year of planting. Others flounder, like the fancy coreopsis that appear and disappear quicker than mushrooms after a rain.

HINT: This part of the Internet is like gardening--it's meant to be fun and helpful, not stress building. It's fabulous to take time to read and post comments, and share information amongst ourselves, but it shouldn't be yet another to-do. I've considered shutting down Bloomingwriter before, but so far haven't done so. I will say I'm considering another project that might be more beneficial and helpful to people, but still in the consideration mode. 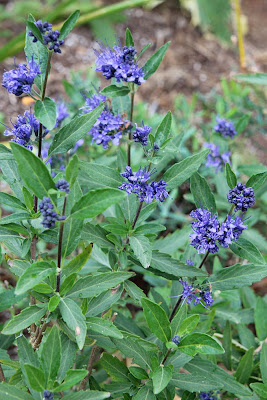 Although many of the colours of autumn are in the bronze-gold-red-orange end of the colour spectrum, there are still great blooms that help cool down the autumn palette. Such as this 'Dark Knight' caryopteris, which has wonderful blue flowers that the bees seem to love. 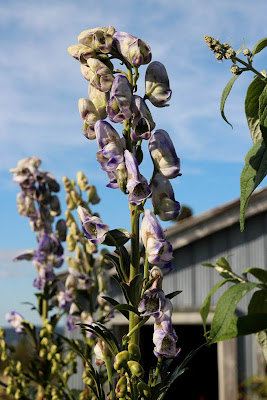 Or this 'Cloudy' fall-blooming monkshood, which was given to me by a friend last year and which is another present for the bees, which tumble off the buddleia and into the flowers of the monkshood, buzzing happily. 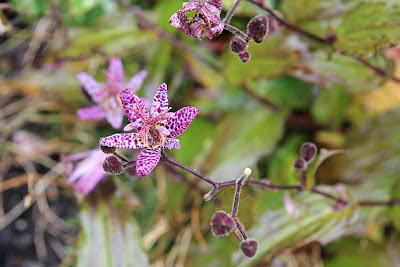 Tricyrtis has been an under-utilized perennial in many gardens, maybe because it is so late blooming, but to my mind that's its allure. It's a small-flowered plant, to be sure--each flower is about the size of a small plum, but the plant is loaded with blooms and has a long flowering period to boot. 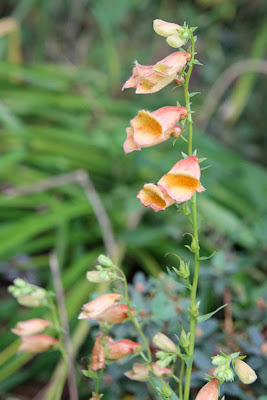 During the grand reopening of Blomidon Nurseries' beautiful new greenhouse and cafe, I succumbed to the urge to try 'Goldcrest' digitalis again. I had this the first year it was available, but either it didn't come back or it was overwhelmed by larger plants where I had it growing. This time, it's in a spot where it has space, and I've noted that it's there, too. Here's hoping that does the trick. I'll have more to say about Blomidon's new look in a future post, but if you live in our area, you just gotta visit the Stems Cafe and enjoy the fresh coffee, sweets and savouries from TAN Coffee company. It's become a new favourite place to visit. 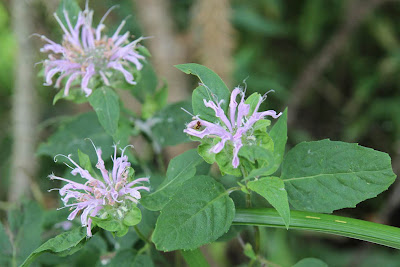 The native wild bergamot is blooming here, too. I'm hoping this time it catches and spreads nicely, as I planted it where it could do just that. I love the pale mauve flowers. 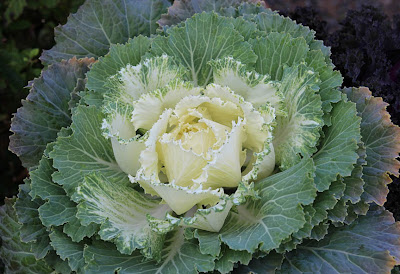 And I love flowering kales and cabbages, too. Everything about them charms me, from their intriguing colours to their frilly leaves, to the fact that they will last pretty much til Christmas before ending up in the compost heap. 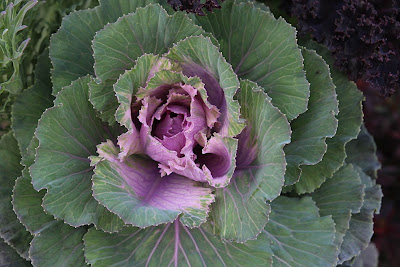 I didn't grow these myself, but got them from Lloyd Mapplebeck at Hillendale Perennials near Truro. Lloyd grows 12 different varieties of kale and cabbage for autumn beauty, and his containers are gorgeous. For those of you who know Lloyd, he is going to have a website up and running for next season, and several others are also joining the social media world. I plan a post on local nurseries but for now, all the ones in Nova Scotia that I know about are listed in the left sidebar of the blog. 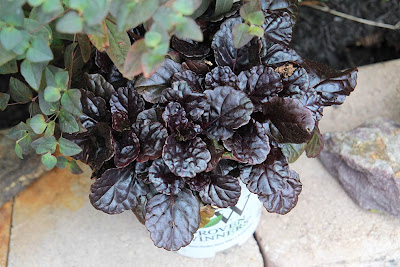 My good friend Adrian Montfort-Guy of Earthen Pathways Sustainable Landscapes told me that his ajugas (bugleweeds) are out-competing the goutweed on his property. I can see how that could happen, and I've decided to try this in my problem area. I have three or four different ajugas here now, but had to add 'Black Scallop' to the collection when I spied it at Blomidon a couple of weeks ago. Here's hoping that it, 'Chocolate Chip', 'Burgundy Glow', 'Metallica' and others will send the goutweed into a black hole in the universe!

How is autumn unfolding in your landscape?