How we got the Itty Bitty Kitteh Committee! 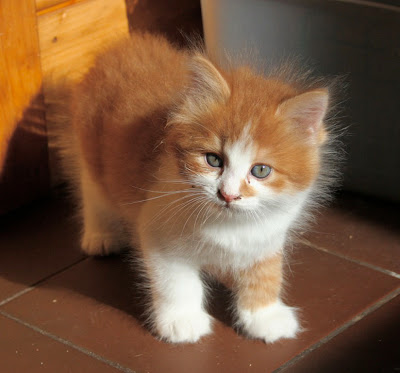 So, back in mid-July, we discussed getting a couple of kittens, as a friend of mine was breaking up housekeeping due to personal reasons, and had a number of young cats and kittens that she wanted good homes for. My son and I went to see them, with intent to bring home two of them, both males. 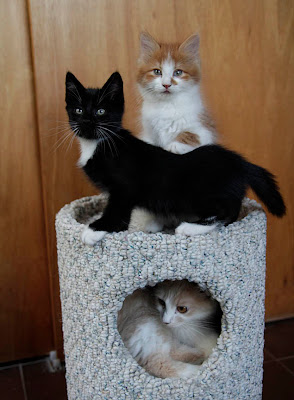 However, when we got there, we found a third kitten that I felt very sorry for. He was older than the 8 week old kittens, about 6 months, and he was sad because his brother had been adopted without him. So, we came home with three little cats, all males. Or so we thought. You know where this is going, don't you? 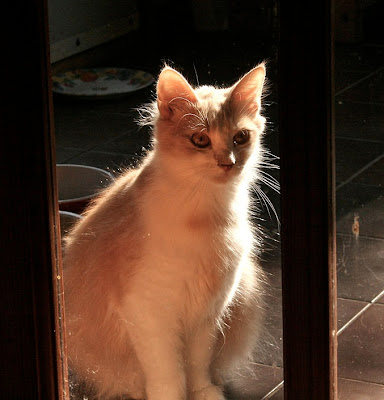 Longsuffering spouse thought the older kitten was an odd shape. I thought it was cool how quickly he adopted the two younger kittens, and seemed to mother them. We named him Pixel, for the cat in Robert Heinlein's book The Cat Who Walks Through Walls. The little black and white tuxedo shorthair became Loki, and his fluff ball brother was nicknamed Sweetums for a bit til he showed more of his personality.

Pixel was gentle and affectionate, but very nervous because of his traumatic separation. Or so I thought... 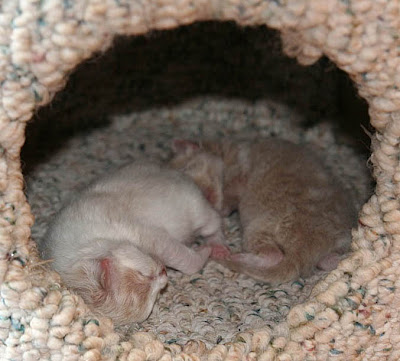 ...until he had kittens.

Yup. Although red and cream cats are often male, in this case, he was a she, and was with child when we adopted her. Ooops. Suddenly three new arrivals became 5. In fairness, the kittens weren't born for a couple more weeks, and I had sorta figured it all out before that, but...hey, both the orange 'males' were very fluffy in strategic locations, and I thought there was more than fluff there. It had been years since I'd sexed a kitten...

And I was out of practice, because Sweetums? Also a female. Happily, not pregnant, of course. 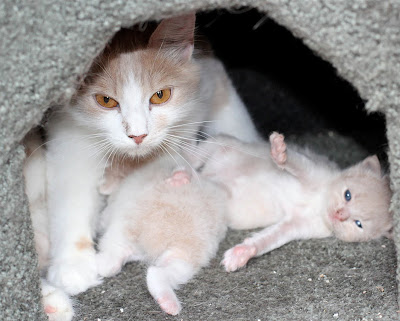 Originally, the plan was to find homes for the IBKC, or the Itty Bitty Kitteh Committee, as the two babies quickly became known. That plan worked til they opened their eyes and began being charming and loving and playful and hilarious. I resisted naming them for a month, just referring to them as the pudgies. 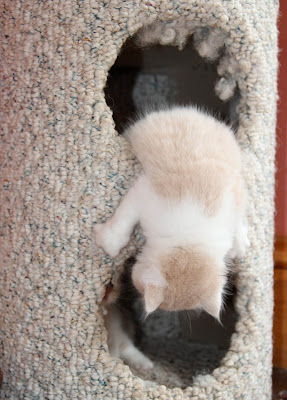 Pretty soon Pudgy One, the bobtailed male, became Timbit, because he looked remarkably like the now-neutered patriarch of my friend's cat family. His brother, Pudgy Two, became Snickerdoodle...just because. And yes, they really, really are both males. I had no problem figuring that out when they were still newborns, pre-fluff. 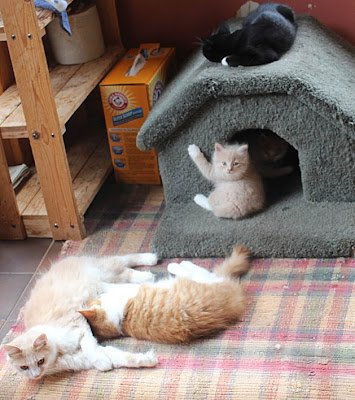 Because they were all new to the family, and I wasn't sure how the older cats would react, especially to the itty-bitties, we kept them in the 'nursery' for quite some time. But what was interesting was how Pixel nursed all four of them as if they were all hers. Even though Sweetums and Loki are nearly as big as she is, now! Weaning has been a challenge.

The older kittens have gotten along fine with the IBKC since the day they were born... 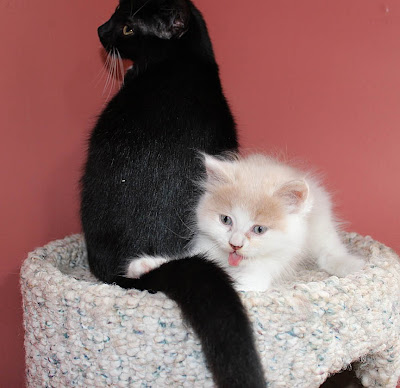 ...even when the youngsters were kind of nuisances. No one has offered to hurt anyone else, and they were often nursing all together in one lump of purring bodies. 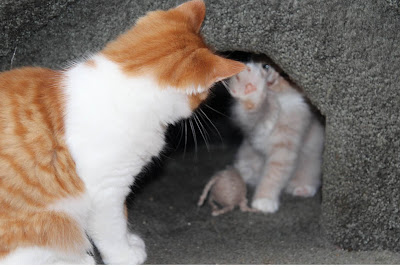 And despite being tiny, they were fearless.

Somewhere in there, it tacitly became acknowledged between Longsuffering Spouse and me that the Pudgies weren't going anywhere. 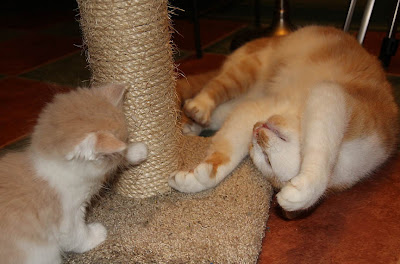 And the senior members of the family have accepted them all without too much fuss, except for Simon Q, who is just grumpy. But here is Mungus, the biggest cat in the house, playing with Timbit, the itty-bittiest. 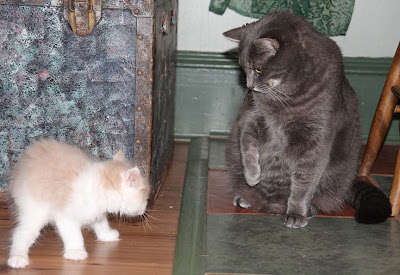 And here is Timbit having a huge, dangerous 'fierce' at Spunky Boomerang, who just can't figure out what the heck this little thing is, but won't hurt him. Spunky, Loki, and Sweetums routinely share the bed together with their human family, sometimes joined by Mungus. Pixel and the babies aren't yet given the run of the house all day every day. We may need to get a bigger bed when they are loose, if they want to congregate with us. 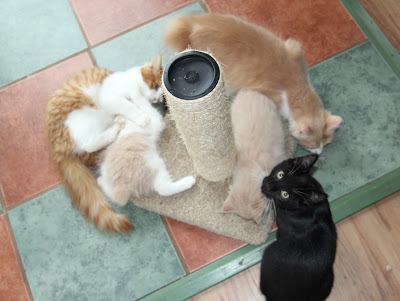 It is fascinating watching them all interact, and watching their personalities develop. Loki and Sweetums (their full names are Loki Hannibal and Mischa Sweetums) were about 8 weeks old when we got them and didn't imprint real quickly on us, but they are loving and fun members of the family. Loki is absolutely fearless, getting into everything, busy and mischievous but also very loving--he melts into our arms when he's tired and wants to snuggle. Sweetums is quieter, more shy but a real little sweetheart. Pixel has about ten days to go before she's neutered, and we think she will settle down nicely when she's not trying to be Supermum. 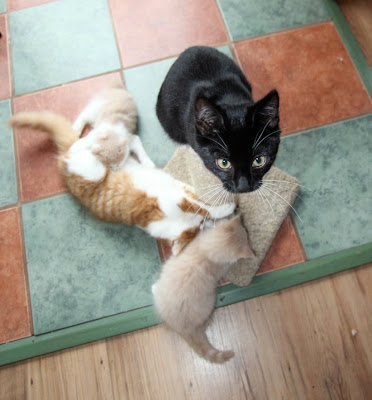 I did mention that Loki is fearless, didn't I? Here he is atop the scratching post, preparing to launch at my camera to see what it is. He is Mungus's understudy, and is going to be as busy and sweetly naughty as Mungus, that's for certain. 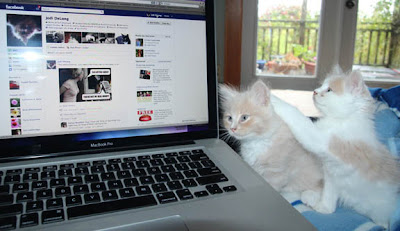 The itty bitties have been charming everyone on my Facebook page, and they are incredibly loving, perhaps because I was there at their birth, and actually helped breech-birth Timbit along when he sorta got stuck. Happily, LongSuffering Spouse is also totally besotted with all of them too. So all is well in our little family, though of course the happiest person in all this is probably my awesome vet, who thankfully gives volume discounts for neutering and needling.

Today was a storm day coupled with a sick-day for me, so I sat in the armchair in the living room with computer and kittens--sometimes as much as six cats in my lap!--and have just been taking it easy, letting the Kitty doctors purr at me. Such joy from such small marvellous bundles of fur and muscles and personality...