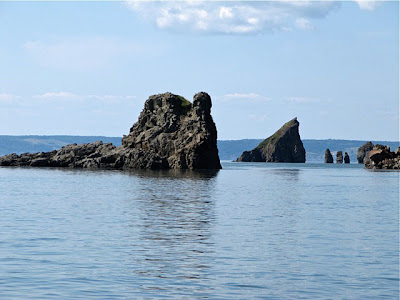 For this week's Skywatch Friday, we're returning to the waters of the upper Bay of Fundy, for another trip around Cape Split. The Split has a popular hiking trail that snakes its way over 6+ kilometres of woodland paths, across the end of the North Mountain and out to the collection of sea stacks that give the trail its name.
Last Saturday it was really, really hot, and also very calm. Hubby suggested we go fishing, but the flounders weren't co-operating, so we went for a jaunt out around the Split instead. 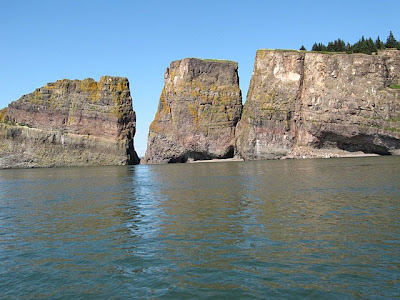 That grassy and wooded area on the right? That's the Cape Split trail's terminus, on a cliff that is over 400 feet high. You can't go out on the other stacks unless you can fly, so we leave that to cormorants, gulls, and Search and Rescue helicopters. Personally, I prefer the boat because there's no traffic, no garbage from careless hikers, and there's this awesome view the whole time. 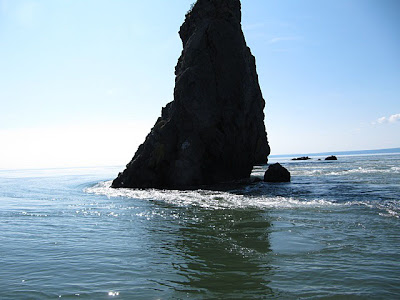 Beyond those first couple of stacks are a succession of lower, but still very impressive, piles of columnar basalt. There's quite a tide races through there twice a day, as the tides turn, but at or near high water, there's more than enough water for a motorized boat run by an experienced operator to go 'thru the Split.'
Longsuffering spouse is a retired lobster fisherman who worked in these waters for more than 25 years, so he knows what he's doing. This is the first time I've been out around the Split in several years, though and the thrill is just the same as it was the first time I went. 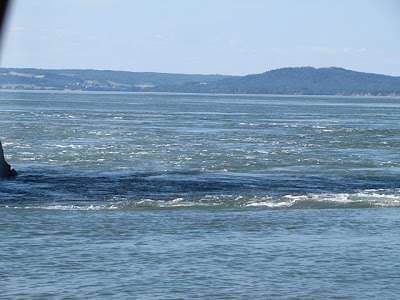 It's really hard to see what is going on here, but bear in mind: this is not a river, but the Minas channel, part of the Bay of Fundy with its world's highest tides. The riptide runs at around 8 knots when it's racing around the end of the Split, and it does some weird things: waves, whirlpools, 'dancing water', like rapids on the ocean. Not for the inexperienced boater. 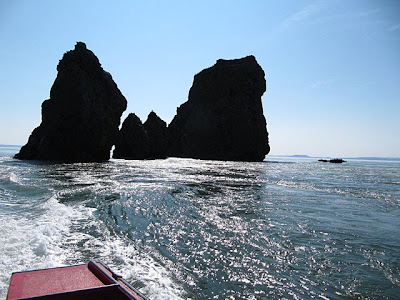 LSS said to me, "the boat is likely going to move sideways here in a second," and just like that, she did indeed skitter sideways like a spooked horse. No problem, of course, with a good motor and a sensible helmsman. I just braced and kept taking photos. Hard to keep a level horizon when you're on the water, though. 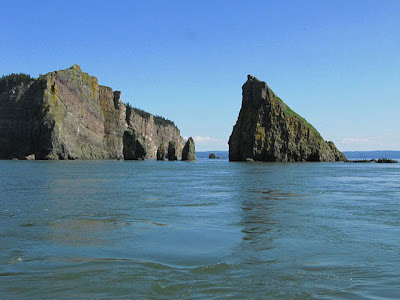 Out well beyond, the water looks deceptively calm, and IS calm elsewhere in the Bay. But it boils and mutters and holds its secrets to itself here. Where we went through the hole is on the left: There's the very high cliff, then a medium sized stack, then three smaller ones, this big one on the right foreground, then the little rocks where the cormorants hang out drying their wings. 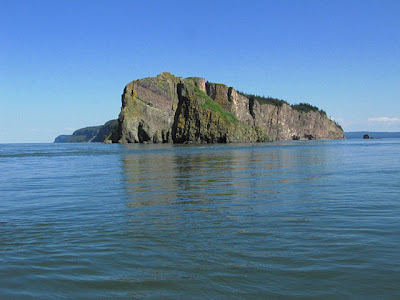 It's one of the most amazing, majestic, and mysterious places in Canada, if not the world. We're so lucky to live here, and to be able to go out on the water and admire this beauty for ourselves. Or we think so, anyway.