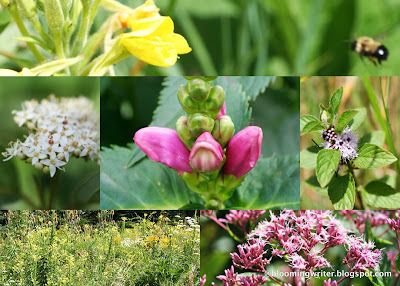 I've never been much in the way of a trendsetter, and often am slow to sign onto doing something that others are doing already. So I'm not-exactly-fashionably late in joining in with the Wildflower Wednesday meme, started and hosted by Gail of Clay and Limestone. Because I spent so much time on Wednesday reading other blogs that were doing Wildflower Wednesday posts, I got inspired and went out to see what's blooming around the wild parts of our property right now.
In the collage above, we have a mixture of wildflowers both planted by me and left to grow wild in the undisturbed parts of our property. From the top: A bee darts from one evening primrose flower to another; some sort of wild mint alongside the pasture; a big clump of Eupatorium (Joe-Pye weed) in my gardens; a former 'holding bed' that has been given over to all kinds of wildflowers for the bees and other pollinators; my Cornus sericea is blooming again; and centre photo, the striking flowers of pink turtlehead, Chelone, are beginning to open. 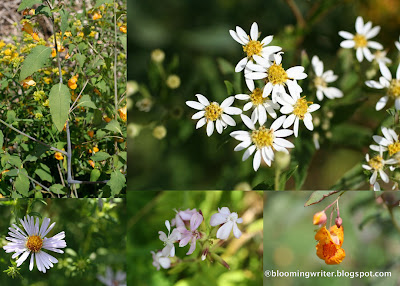 I have a very laissez-faire attitude towards many wildflowers, letting them bloom where they are unless they're starting to be a little too populous. There's a lot of jewelweed (Impatiens capensis) around the moister parts of our yard and garden, and they're regularly buzzed by hummingbirds. Bouncing Bet (Saponaria officianalis, centre photo bottom row) blooms alongside the pasture but also in one part of the garden where it's been for years. And then there are the asters. I have wild and cultivated asters all over the gardens, and sometimes the wild ones aren't supposed to be where they are, but they're terrific pollinator plants and pretty into the bargain, so I often just pretend I've planted them where they are. 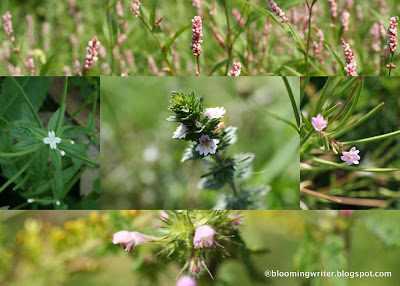 Not every wildflower is a great blessing, even to me. Lady's Thumb (Polygonum cespitosum, top photo) is a real nuisance plant for many people, as are others of the smartweeds/polygonums. The tiny flowers of American willowherb (Epilobium ciliatum, side photos both white and pink flowers) aren't as showy as fireweed (E. angustifolium) but they're a real nuisance plant in my garden. Hemp nettle (Galeopsis tetrahit) is a huge problem to some gardeners and farmers, but doesn't bother me unduly. And the little plant in the centre is a mystery--I can't for the life of me remember what it is, and it's not a particularly showy or pesty plant, just a pretty little thing. 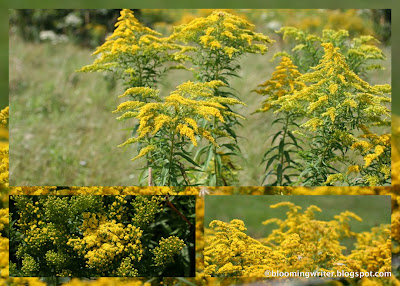 Goldenrod gets much maligned by some people, so let's set the record straight. If you have allergies, don't blame goldenrod, which is insect pollinated, not wind-borne. Its pollen is too heavy to drift, but it flowers at the same time as do several species that do bother allergy sufferers, such as ragweed and some of the asters. Goldenrods are important wildlife supporters, and they're very pretty too. There are now a number of cultivated varieties of goldenrod, including 'Little Lemon', a very attractive variety that I have just coming into bloom in my garden (bottom left photo). A number of wildflowers are now popular with gardeners, or have been the basis for new cultivars of ornamental flowers, and that's never a bad thing. At least, it isn't in my worldview.
These are some of what's blooming around our property in these last days of August. I have mixed feelings when I see the asters and goldenrod and Joe Pye and turtlehead; as much as I love them all, I know that they are also harbingers of autumn. Which I'm not prepared to deal with yet, so I'm going to stick my fingers in my ears and sing loudly so as not to think about that any further!