Having a Hellebore good time for Bloom Day 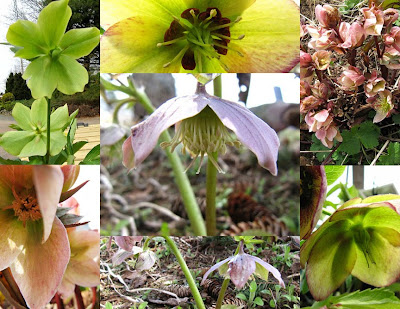 For a couple of years I was seriously challenged by hellebores, and unfortunately at the same time I had a deep and abiding passion for them. I don't know what it is that appeals most to me: their early rising to cheer our hearts or their complex and lovely flowers. They look somehow extremely exotic to me, and considering the fact that I have a lot of diverse, lovely and sometimes exotic 'stuff' growing in my gardens, that's quite a statement. They just fascinate me.

And they used to defeat me, because of two things: the capriciousness of our late winter/early spring weather, and the ongoing hassles with drainage. Clay has its advantages, generally being nutrient rich and holding moisture in summer, especially if you mulch it. However, it can also hold too MUCH water in winter and spring. Saturated soil is not good for many plants, including hellebores. But finally I located the best spots for them, and they're doing well, also thanks to the tutelage of Frances of Faire Garden and Barbara of Mr. McGregor's Daughter fame, who have been my hellebore mentors, so to speak. 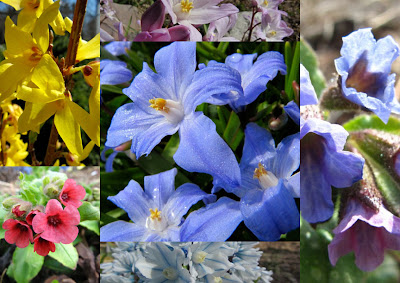 But we're a little ahead of ourselves here, so to speak. There's actually quite a bit blooming in my garden this April Bloom Day (Thanks to Carol for hosting this longrunning meme!) Along with the usual forsythia-which still gladdens my heart even if it's common-as-dirt--we have snowdrops, and puschkinia, and glory-of-the-it-better-NOT-snow (Chionodoxa) and the first of my beloved pulmonaria (Redstart and an unnamed P. angustifolia seedling). 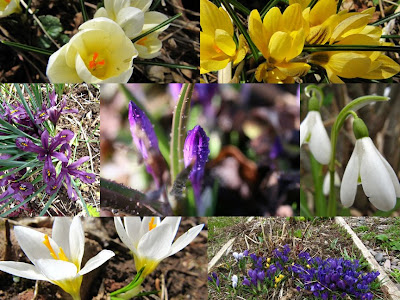 While the double galanthus are winding down, the single flowered forms are still going marvelously strong. And we have iris reticulata, and still have all kinds of crocus happening--some of them just coming on. That's the advantage of living where we do. Although spring comes slowly sometimes, the cooler weather also means that things last longer. Or so I console myself. (was that REALLY snow falling earlier, or just chunks of frozen clouds? Whatever they were, they didn't stay around.) 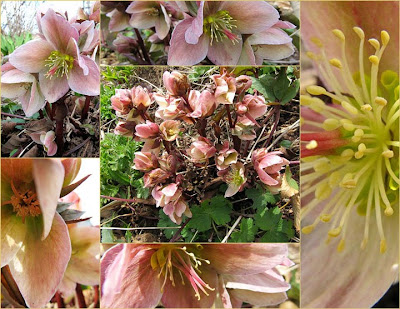 Okay, back to slobbering over hellebores. Yes, they're glorious. They're also apparently quite promiscuous once they get going, though I haven't yet detected any seedlings around mine. The first two to join our family and stay with us were 'Ivory Prince' (above) and the less showy but still wonderful H. purpurescens. There's also H. 'Red Lady', who is a little shy and slow but coming along nicely. 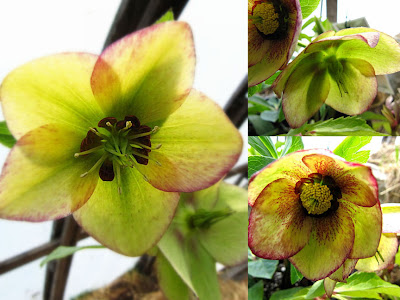 I have a new love now. Yes, yes, I do. Meet 'Golden Sunrise', who utterly seduced me with glowing, rich colours, and got into the back of my car before I could argue. I could sit staring at those flowers with their aurora borealis-like colours for hours. I don't think that will make them bloom longer or stronger, but I'm totally smitten.
However, there will be others coming to join the hellebore family very soon. I have four new cultivars waiting for me at my friend's nursery, including (gasp!) 'Metallic Blue Lady.' Almost as cool as a blue poppy. And the mail is bringing other surprises soon.
Obviously my Urgent Plant Seeking Madness is not going away any time soon.
Happy Bloom Day, everyone!