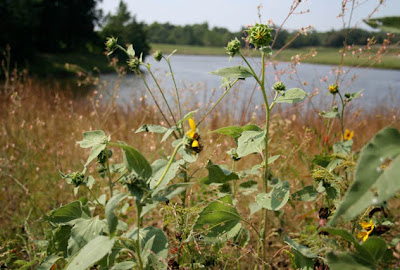 Okay, we're back to talking about plants again. Specifically, native plants of Missouri, on account of I don't know much about them overall. However, part of the reason my luggage was rather heavy on the way home was that I bought two books that will help to shed some light on the flora of Missouri (and Kansas, as we were in and out of that state because of the way the border weaves around the city and surrounding areas.) 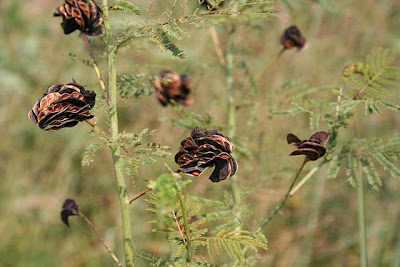 This is fun for me, because I love seeing plants that I might recognize as far as family or MAYBE genus, but no further. Because we were under such time constraints the whole trip (sleep was optional, as was eating but I drank a LOT of water), I didn't get to talk to a botanist at Powell Gardens, and the one person I did speak with was more informed about the garden plants than about the natives. So we'll go to books and the wisdom of blog-readers for some identifications. 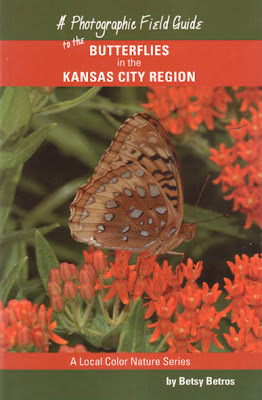 One of the two books I scored is this lovely volume on Butterflies in the Kansas City Region. Beautifully bound and full colour photographs all the way through, including of many plants that attract pollinators. You know how I am about pollinators... 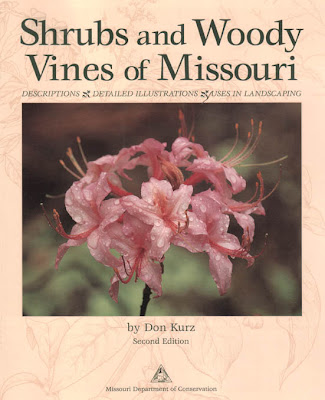 This wonderful fieldbook of shrubs and vines has a companion wildflower book, I understand, but it wasn't at the Gardens store. I'll probably try to track it down just because I'm such a nutcase about native plants. Beautifully illustrated, and well written, with botanical terminology as well as common names and interesting asides. Possum Haw? (Ilex decidua) Wahoo (Euonymus atropurpurea) Gotta love such names! 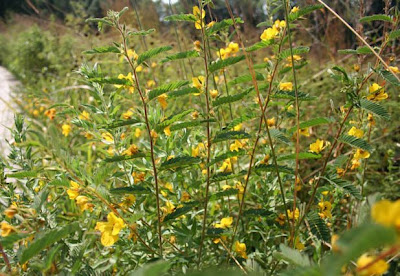 Okay, plant people, put on your thinking caps and let's consider some of these wildflowers. This one appeals to me because of its graceful foliage and pretty yellow flowers. 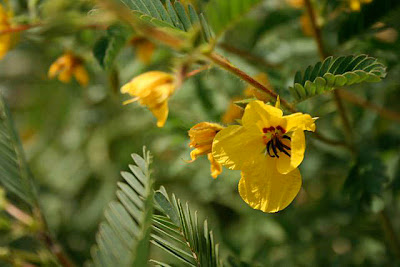 Here they are a little closer. (ETA: Thanks to Lisa, we know this is Partridge Pea, Cassia fasciculata) 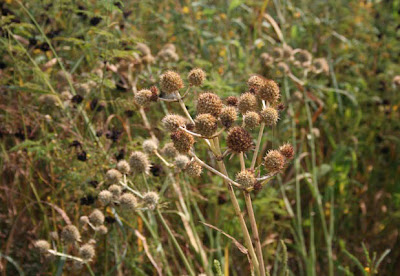 This one I recognized as rattlesnake plant, Eryngium yuccifolium, because I have the immense pleasure of having it grow in my garden. Here's hoping it selfseeds as it flowered beautifully this year. 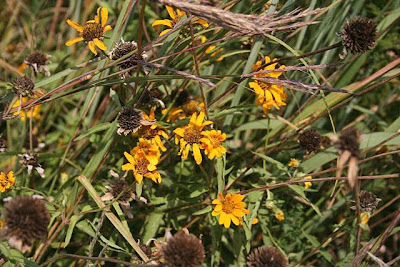 Some sort of tickseed or sunflower caught my eye. I suppose I could have picked a stem to dry and preserve, but I just couldn't do that in a public garden, even with masses of wildflowers in some areas. 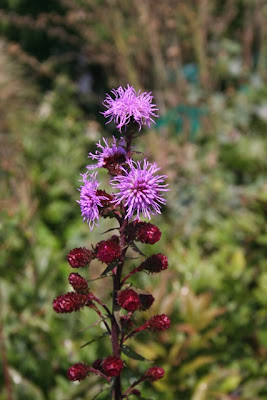 I'm thinking this is some sort of liatris. (ETA: yes it is, after Gloria put me on to Rough blazing star (Liatris aspera), which I crosschecked against my other photos. I love this plant, more than the standard liatris in our garden.) 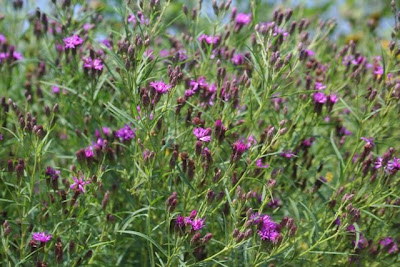 And this, a centaurea, aster, or heck, maybe even a liatris. Or something else completely again. Whatever it is, it's a butterfly magnet, as it was covered in small pollinators which kept flying while I tried to get in for a closeup. 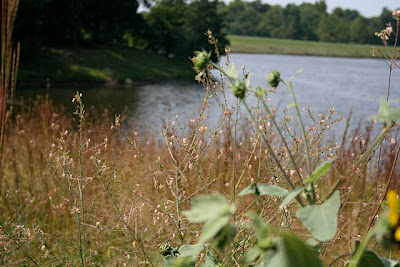 Not the best shot of this tiny-flowered plant, and it was also somewhat wilted in the heat. It grows to five feet tall, though and was quite graceful, weaving in among the grasses and the sunflowers. 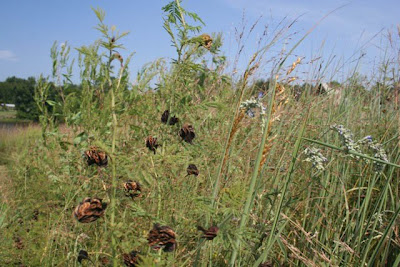 I THINK this brown seeded plant is called basket flower, but I'm not sure, and I haven't looked it up yet, but the seedheads are certainly attractive! And there's some sort of blue flowered, vetch like plant beside it, and of course assorted grasses.
(ETA: Actually, it's called Illinois bundleflower (Desmanthus illinoensis, thank you Gloria) and it's really quite a charmer, if only for those delightful seedheads)

Sigh. I want to go BACK to Powell Gardens, maybe in early summer, and observe the place much, much more closely. Because it's marvelous, and I hope that Missourans and Kansas residents (what do you call someone from Kansas--NOT DOROTHY!) take excellent advantage of this public garden, which is completely worth a whole day's visit. Just bring lots of water to drink. And a sunhat.