Before anything else, pretty pictures or words, let me say a huge, heartfelt 'THANK YOU' to all of you who have posted get-well wishes to me in recent days. It's been a challenging summer at many levels, and I'm fed up with being sick all the time. Yet I also recognize others have it way, way worse than I do, so to paraphrase an old poem, "God forgive me when I whine...I ain't dead yet, the world is mine." 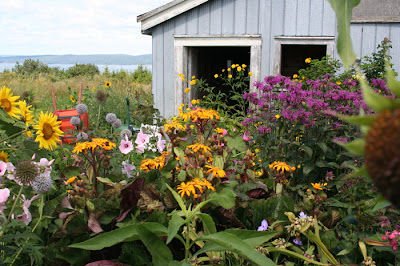 September: it was the most beautiful of words, he’d always felt,
evoking orange-flowers, swallows, and regret.
- Alexander Theroux, 1981

I read these words on a calendar or in an almanac one time, and thought about how true in some ways it is, at least in this gardener’s musings. It seems especially poignant to me this year, as we race towards the oncoming of autumn in just a few hours time. 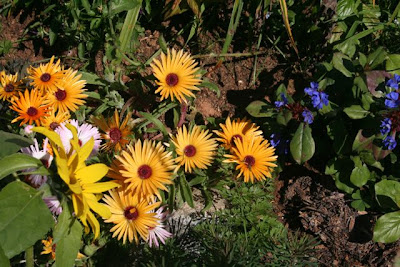 Orange-flowers may have meant the flowers of the orange tree to M. Theroux,(I love texts that can be construed in several ways) but to me they mean orange-coloured flowers, of which there are more than a few in our garden. The last of the daylilies are winding down, after a remarkable display that has been going on for at least six weeks, but the school-bus orange of Stella d’Oro still remains. A host of Rudbeckia, Helenium and helianthus are doing their thing in riotous shades of orange around the garden, and Ligularia ‘Desdemona’ brings visitors to a complete halt, with her huge burgundy-backed leaves and very orange flowers. Even the wildflowers are into orange, with touch-me-nots (Impatiens) hanging with their little bonnet-like blossoms open for bees and any errant hummingbirds that might be around. I know I wax on and on about ice plant flowers, but they just please me so immensely, and I love the orange ones contrasted with the blue of the plumbago--a sure cheering sight on a watercolour autumn day, when rain is hinted and the sun is weary. 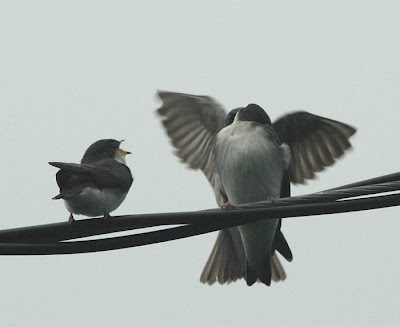 Swallows means several things to us. The tree and barn swallows fledged their young some time ago, and while they were here earlier in the week, I think they have departed. They brought great joy to us as we watched their aerial ballets and breakdances (the children were a bit clumsy by times.) Last year’s fledgings and flight-training was hilarious, happening on a particularly windy day. The swallowchildren would flutter around for a while, then all land in a row on the ridge of the house, where no exhortations could move them until they were ready to move. This year, flight practice days were cool and calm, and the little ones landed only to start their incessant demands for food. “Feed me!” their imperious little voices proclaimed, and the parents did.

Swallows too meant swallowing those lumps in the throat that come on wistful moments when we realize that summer is slipping through our grasp all too quickly. Wasn’t it only last week that it was April and we were grumping about the cruelest month, waiting for bulbs and lilacs and all sorts of other floral festivals? We celebrated the arrival of each and every species, from snowdrops and crocus to daffs and tulips, forsythia and lilacs and on and on. Then came the big flood of perennials and we were drenched in colour, texture, scent and sounds of our garden. Now suddenly the evenings are shortened as the sun’s journey takes less and less time with us; and even though we know we will have many golden autumn days to savour, we also feel a definite spasm of … 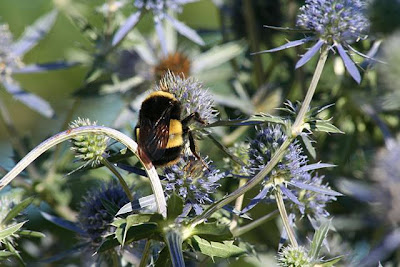 Regret. We berate ourselves about what we didn’t accomplish. There are too many weeds, too few flowers, too many things left to do before the closing down of summer is completed. We didn’t visit other gardens as often as we wanted to. We didn’t stop to enjoy our own often enough, perhaps. We didn’t plant that dozen new trees, build that wall, or simply wander around of an early morning with coffee cup in one hand, savouring the marvels of a perfect rose or the dance of the hummingbirds or even the lumbering bouncing flight of a pollen-and-nectar-laden bumblebee. Or maybe we did all these things, but still grieve at the passing of our favourite part of the gardening year.

Still, September and autumn come laden with gifts and hope. The clear, sunwashed days give way to crisp nights ideal for sleeping, and not so many humid-hung days when even reading causes a sweat. In our garden, at least, the floral fireworks continue almost unabated, and while there are orange-flowers galore, they are tempered by other shades, roses and purples and blues, sparkling white and fiery red and yes, the much maligned magenta so despised by some and so embraced by others. It’s true that the swallow-children and other young birds have packed up and headed out—a few hummers still around, and there will be stragglers yet. But also, we will have an abundance of birds throughout the autumn and winter to delight us and the fans of ‘Bird television’ (also known as the cat-children). 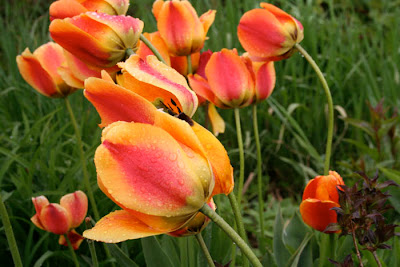 And there is planting yet to do, whether dividing perennials or tucking fall-flowering annuals into containers, or planting the hundreds of bulbs we just couldn’t resist purchasing. So I won’t throw in the trowel just yet, nor wallow in too much autumn-nostalgia. Just a little...

Is anyone else feeling that twinge of sorrow for summer's passing? Or are you ready for a break from it all?