The Ongoing Tragic Tale of My Hollyhocks 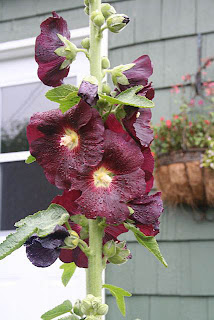 I've whined before about my ongoing problem with hollyhocks. The Reader's Digest condensed version of the story is that I have hollyhock challenges, particularly when it comes to one particular colour. Yellow. I've been trying for years to get yellow hollyhocks.

They refuse to bloom that colour for me. 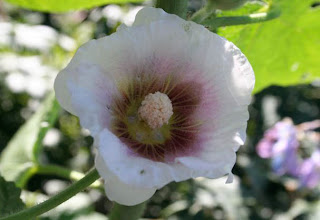 It's become a point of some horticultural hilarity in my world. People have kindly sent me seed, left me seed on my doorstep along with flowers to prove that the seeds came from yellow plants. I've sown them. I've tossed them around the garden.

This year, I thought I'd finally had success. I have quite a few hollyhocks growing, mostly in some rather unlikely places. I DON'T remember throwing seeds there, but whatever. There are different leaf shapes. I was sure among them would be at least one yellow one. Of course there would. 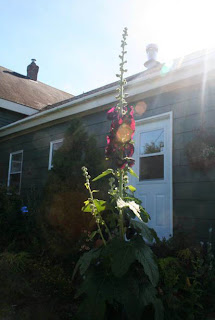 Well, let's see....there's the black ones, of course. I AM very fond of these, deep wine as they are, and they make a nice colour echo near the Actaea 'Black Negligee'. So they're just fine. 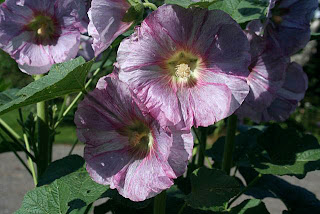 Hmmm. I don't know WHERE this one came from. It is, most definitely a pretty thing, but I'm quite sure I haven't had these before. Nor planted them. Hmmmph. One of life's little mysteries, I guess. 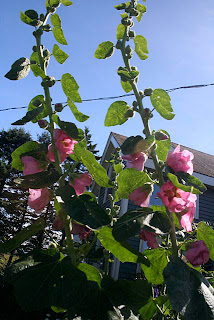 This, I think, is legacy of the huge giant pink monster hollyhock I had two years ago. I figured it would produce enough seed to populate the world in pink hollyhocks. It did indeed yield a few plants in this colour. Not my favourite colour, by a long shot. Definitely not yellow. 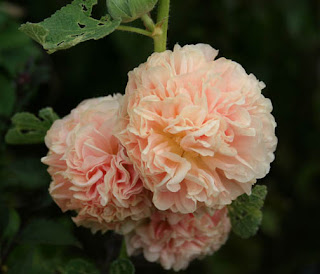 I don't want my hopes dashed the way they were two years ago when I thought I finally had a yellow hollyhock. When the buds showed beautifully yellow as they prepared to open...and this is what I got.
This is the one I argued about with my long-suffering spouse. Told him it was orange. It certainly wasn't yellow--and I had bought this plant as a yellow-frakkin' hollyhock.
Maybe it's my soil. Or my karma. At least my hydrangeas are all blue rather than pink.
Well, there is one other option. Last year at the Saltscapes Expo, there was a very talented metalworker who did sculptures of plants and other items using recycled oil tanks from people's homes. When I saw this, I had to have it. 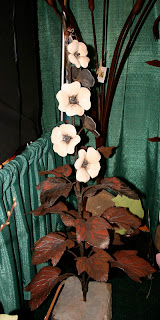 Okay, they aren't bright yellow. Sort of a cream colour. He said he'd paint them for me, but I like them as they are. They aren't botanically correct, but I can live with that. They DO suffer from hollyhock rust, but it's a noncontagious kind...And they won't get winter rot, fall over in windstorms, or be pink.

And I'm all right with that.