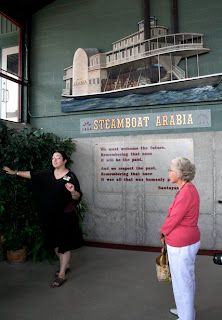 Day one in Kansas City, Missouri, and I gotta say, this is a very, very pretty city. But first, I gotta give props to United Airlines, because I had two of the best flights i've ever had today, both on United or its affiliates. Both left on schedule. Neither was full. Both landed on schedule, and my luggage made it from Halifax to Dulles, Washington to KC with me. So take THAT, Air Canada, where i've never had a really good flight experience!

My buddy Angie picked me up at the airport, and despite the fact that both of us had been up all night (she's a babynurse, and i left home at 0200 for an 0600 flight), we went right into action with seeing what the city has to offer. The first stop was the Acadia Steamboat Museum. The Acadia hit a tree snag in the Missouri back in 1856 and sank, with the loss of only one life but with the loss of its entire cargo of supplies for communities downriver from its point of origin. 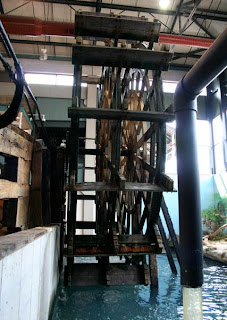 Over 130 years later, five enterprising men unearthed the Acadia's remains--and her cargo--from a cornfield where the Missouri had formerly tracked. The entire list of inventory still has not all been put on display, 20 years after it was first unearthed. Dishes, ironworks, fabrics and leather goods, and many other supplies were found and salvaged and put into the museum that bears the steamer's name today. 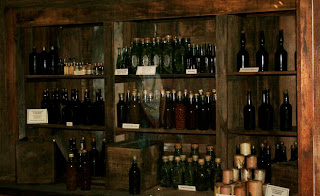 There were many bottles of preserves, and one of the adventurous discoverers of this cache actually sampled some of the preserves (twenty years ago) and found them to be quite palateable). 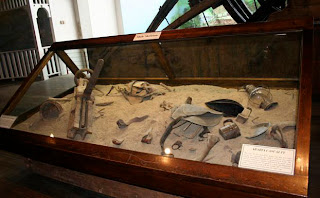 The only casualty of the ship's sinking was a mule, the remains of which have become something of a mascot to the museum and its staff. And you'll love the humour that they nicknamed the mule 'Lawrence." 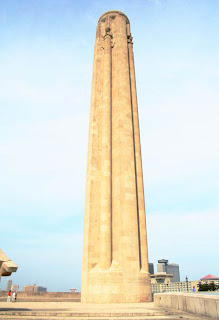 The afternoon found us at the recently opened National World War 1 Museum and the Liberty Memorial. Being a proud Canadian, I know my own country's role in that first terrible war quite well, and while the US didn't enter the battle until 1917, their participation certainly helped to revive the exhausted Allies and turn the tide to victory. I didn't take many photos in the museum, content instead to wander among the exhibits and films and static displays and just pay silent homage to the dead, of that war and of others since then.

But the 217 foot tall tower really caught my breath and my admiration. Dedicated in 1926 five years after its initial commissioning, the limestone tower is flanked by two sphinxes, "Memory" and "Future". You go up in an elevator then walk up another 40 or steps to the observation area, where you get a 360 degree view of the city skyline. 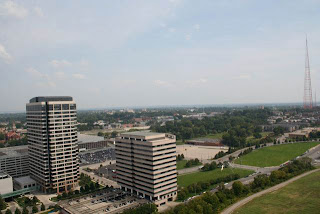 Though it was hot and hazy today, there were several impressions that really caught me. One, the greenness of the city. My friend says that they've had above average rainfall this summer so that things are not so sere and brown as they might normally be. Lots of trees and shrubs, flowering containers, ornamental grasses and of course, the fountains that I'll be writing about in future posts. Gardens look well tended, though we'll inspect them more closely tomorrow. 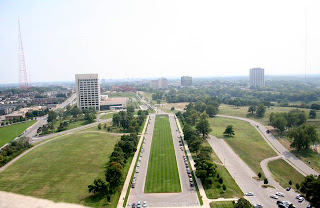 This is the greensward leading up to the memorial, as viewed from the top of the memorial.

I'm not an architecture buff, and can't tell one style too much from another (I recognize they're different but not so much what is georgian or what is art deco.) But I was completely fascinated by some of the older buildings we saw in the downtown core, many of which have been exquisitely restored or are being restored. 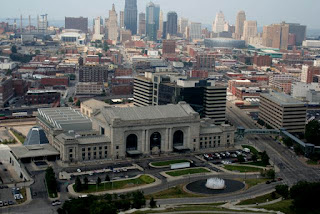 There are some wonderful newer buildings too, and they fit well with the historical buildings. One that caught my eye today was all shiny mirrored glass, reflecting a classically styled older building in its facade. I didn't get a photo as we were zipping down a street at the time, but tomorrow after some rest and a change in footwear, we'll go exploring properly. And yes, I'll take a photo of the Sprint Centre. And yes, for those who are wondering...I'm going to both concerts at this venue. This is David Cook's hometown, after all, and it's going to be incredible. Happy (early) birthday to me!