The Endless Summer that Isn't 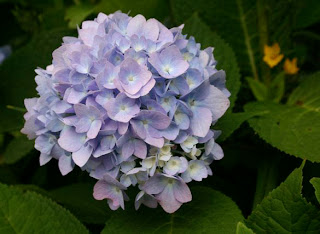 This is truly being the summer of my gardening discontent. The weather is enough to drive a person to drink. While others around the province have been enduring dry yet cloudy and humid conditions, we've been getting wet , cloudy and humid conditions. Fog doesn't bother me, normally--it's here, it's gone. Not this year. So much southwest wind and therefore fog. When everything is soggy wet, it's just not conducive to wanting to be out playing in the garden. So I stay inside, work and glower out the window on occasion, waiting for those dry days to arrive. Harrumph!

Despite the lack of real tender attention from me, things continue to grow and flower, as they do. Above is Endless Summer hydrangea, which seems to be having a better year this than last, when I threatened it with being moved to the compost pile if it didn't pull up its socks, so to speak. It's not having huge numbers of flowers, but what it has are definitely pretty. 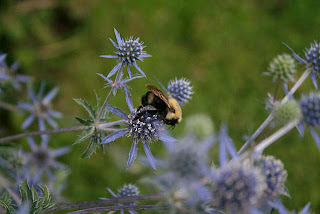 Flat sea holly (Eryngium planum) is one of the stars of our garden from early August onwards. Other sea hollies have flowered already and are drying into pleasing seedheads, but this one just goes on and on, covering itself in rich lavender blue flowers. It's very beloved by the pollinating bees, butterflies and other creatures that visit here. 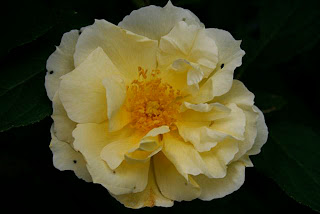 There aren't a lot of yellow rugosa roses, but one that I'm fond of is Topaz Jewel, well named with its glowing yellow flowers. They aren't as fragrant as their red or white counterparts, and they do shatter easily, so I just leave them on the shrub to flower merrily along. 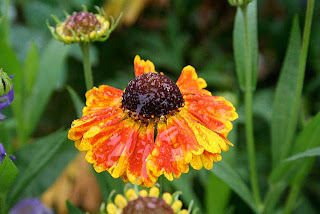 A sign that summer is past its peak; the helenium have begun blooming. Several of these more compact varieties tend to come on earlier than my exuberant tall yellow ones in the back garden, but I love each and every one of them.

And now it's time for a bit of an ode to coneflowers. I know many of you who are regular readers share my absorption in coneflowers--they're just such splendid, undemanding, high performing plants, and with the diligence of plant breeders in recent years, we have so many more colours than just the white and purple we were long accustomed to. 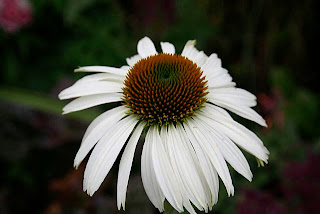 White Swan IS one of my favourites, just because it's a tidy, handsome plant and its flowers are so pristine. 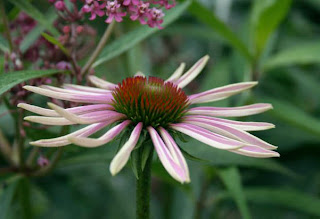 And this would be your standard purple coneflower. I have a lot of these, because as with other plants that we have many of, they're pollinator magnets. And we are very gratified to see a LOT of bees this summer, I think more than usual, or maybe I"m just spending more time watching out for them. 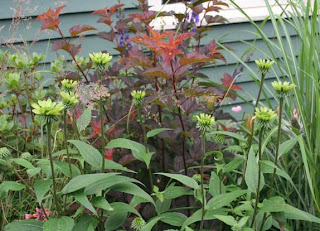 'Green Envy' is definitely a star in my books, and I'm awestruck at how well it settled in and multiplied itself from last year's planting. It's doing very, very well, wouldn't you say? 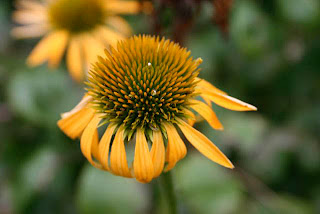 As a nice counterpart to all that green, 'Harvest Moon', one of the Itsaul Big Sky series of coneflowers, is richly gold and another favourite. 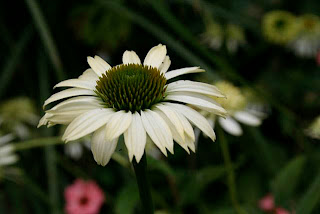 This is 'Jade', one of the first of the so-called green coneflowers. Compared to Green Envy, it's not so green, but I love it anyway. IN the blurred background, you can see 'Coconut Lime', which has also settled in well and is flowering happily. Double coneflowers aren't to everyone's tastes, but that's the pleasure of gardening--we can all plant what gives us joy. I never met a coneflower that I didn't love, though some have been cranky growers for me.

But they always behave better than hollyhocks.

A followup to all your lovely comments on the hollyhocks. I DID plant yellow ones out there, because a few people sent or gave me seed. But there are apparently garden gnomes at work that, because they've never been freed, insist on exercising their mischief in my garden by roguing out the yellow ones.

That's my story and I'm sticking to it.