Pieces of April...on a Morning in May 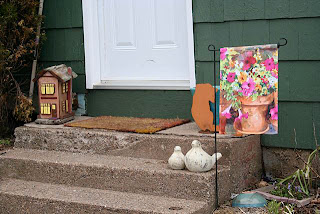 For this cool, windy first day of May, which also happens to be the date for the monthly Garden Bloggers Muse Day post, (and a big, warm Happy Birthday to Carolyn Gail, founder of GBMD and an inspiration with her youth and energy!) I traipsed outdoors to have a look around part of the garden.

As the wind chilled me to the point I decided to go back indoors and build a fire in the stove, an old song by Three Dog Night slid into my head. It appears that my MUSE is more MUSICAL than poetic this month. I give you first, Pieces of April...

That sounds rather melancholy, which I'm really not--just very, very tired. My one day off turned more or less into three, although medical appointments etc don't really count as day off material, do they? I think it's good, sometimes to take a step back from things we're passionate about, whether that be gardening, blogging, reading gardening blogs, or yes, even working. 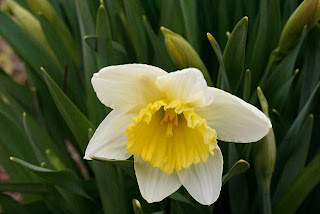 And I did take mental health time...from doing some gardening to riding my boisterous horse, who was pretty well behaved though he attempted a couple of moves that should only be made by Lipizzans or dressage horses. My knees aren't engineered to having him do piaffes (trot on the spot) or other airs above the ground! After all, it's not the flying through the air that hurts...it's that sudden thud at the end when gravity takes over and you're no longer above, but ON the ground. 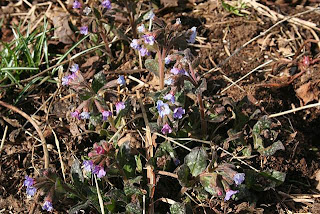 My garden is definitely showing more pieces of April (or February or March) than of mornings in May. Things are certainly coming, and we've had some nice warm days, but then a cool day or two puts growth into stasis. Despite that, it's exciting to see new growth and awakenings each day. The pulmonarias always tickle me, because they're barely out of the ground before they're flowering. 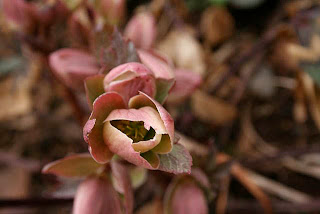 The other song that ran through my head as I traipsed and shivered around the garden was "Someday my Prince will come...." in this case, Helleborus 'Ivory Prince'. The cool weather has slowed his approach, but slowly, slowly...it's starting to open. And the wait will be worth it, because we have multiple buds. 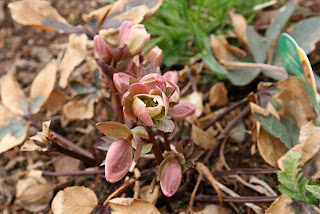 The only problem with both 'Pieces of April' and 'Someday my Prince' is that they're earworms (not to be confused with EARTHworms) that embed themselves in my mind and repeat over and over and over and over...I like them the first few times but after that feel like taking a vacuum cleaner to my brain. The cure for earworms is a trip either into my musical library or a visit to You Tube ((or iTunes) for a dose of GOOD music.....


Just goes to show you that a somewhat aging gardener who is passionate about Bach and Chopin can also appreciate rockers who are also emo enough to weep in public for their critically ill sibling. (and not discuss it, either. Just weep.)

Okay, maybe I AM a bit melancholy here...nothing that WARM sunlight and my Hellebore opening fully won't alleviate. We all have days like this, don't we?