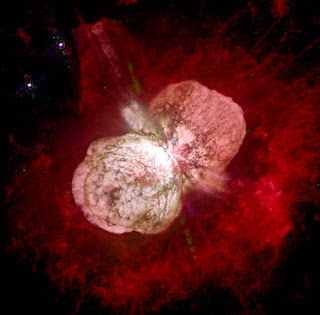 I rarely go offtopic from gardening, at least not too far. But right now, I'm gonna do so.

The image above is is Eta Carinae, said to be one of the most bright and massive stars in the sky--and due to go supernova one of these days in the future. 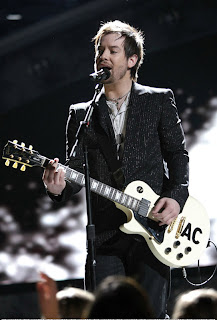 This is a rising star about to go very big too. I've watched David Cook on American Idol All. Season. Long. I don't DO reality shows. Normally I watch the tryouts for the sheer delight of the weirdness and of Simon's sardonic wit. This year, I got hooked by several of the performers, and this guy with the Les Paul guitar has excited me like no musician since, oh, I dunno...Bono of U2, I think. I started rooting for him in earnest in Top 20 week, and have been fascinated and excited for him ever since.

Because I believe in talented young people blazing their way through hard work into success. And this guy has paid his dues. He also appears to be a screamingly nice guy, with a good stage presence, 'easy on the eyes', as even producer Nigel Lythgoe has acknowledged, and oh yeah, he's a Word Nerd. Gotta love smart musicians.

Anyway. Tonight is the final two showdown. And everyone who likes this guy HAS got to vote. Because he's the most talented of the two, though they both have their merits. NO slight to DA, but it's not his time yet. 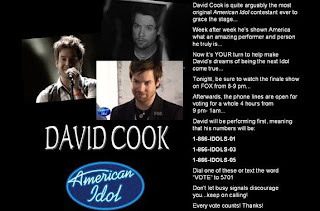 I believe in people who deserve to come first, coming first. And David Cook deserves to get the boost that being the American Idol will give him. So, like the saying goes, folks...vote early, vote often. (People get more than one vote with this, unlike with elections.)

I say you...because i'll be at another Idol's performance. Bob Dylan is in Halifax tomorrow night and I have a date with my son and some friends to see him.