They said there'll be snow at Christmas...or at least Christmas roses 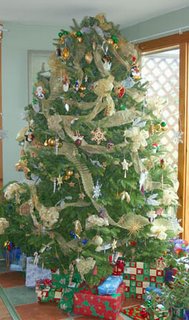 We have our live, green balsam fir Christmas tree up and decorated, and while we don’t go overboard with the interior décor, the house looks happy. A wonderful poinsettia, deep wine in colour, makes me happy just to look at it. Thankfully, it’s genuinely wine-coloured, not dyed like the hideous blue, purple, gold and other hideous “fantasy poinsettias” that are being flogged by some merchants. Yes, I know I grumbled about that earlier; well, I’m gonna grumble again.. Blue poinsettias rank right up there with black Christmas decorations in my book of yuks. I’m all for developing interesting new plants via genetics, but not through faking it—or through the ‘tastes’ of some supposedly-trend setting fashionista in Milan, Toronto or downtown Chibougimou.

Sorry if that last sounded curmudgeonly…as much as I love the Christmas season, I do get appalled, sometimes by the commerciality of it all. Last week I was observing this woman in Canadian Tire. She’ll never see fifty again, yet she was trying desperately to look thirty-something; black leather plants, tight red jacket, 4 inch spike heels on her red leather boots…clutching a pile of black and white Christmas decorations. I mused aloud to the cashier ringing in my purchase about the lemminglike behaviour of some people, and she said she’s had customers go through with hundreds of dollars worth of decorations in some new colour—be it bronze, turquoise, purple, lime green or yes, black—and she said to me, “Do they have any idea how many hungry people that money would have fed?”

Well, I love the colours of the Christmas season—red and green, some gold and silver tossed in for good measure…a little blue is okay, but in lights and ornaments only, puh-leeze.

Can anything beat the natural beauty of holly? Ours are doing very well, though I suppose I should prune them a bit. The female plant has a lot of competition during the summer from two overly-enthusiastic clematis that are scrambling up the arbour beside the holly, but it still manages to produce some great branches of deep red berries. 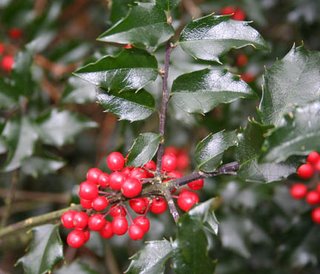 The purple barberry, too, is heavily laden with brilliant red berries, and the multiflora roses still are holding quite a few of their tiny red hips.

Today, our garden is in a state of suspended animation, as we had a good hard freeze the past couple of days. Perfect time for me to spread the evergreen boughs I cut in the woodlot last week. Because we have so much in the way of gardening, only the tenderest of plants get covered here, or things I’m not quite sure about yet. We get so many freeze and thaw cycles, and that’s not good for plants, hence the mulching. So the blue poppies and corydalis, the geums and perennial potentillas, the lavender and a few newer shrubs, are all resting gently under their mantle of fir and spruce boughs.

But there was a surprise awaiting me when I went to cover the blue poppies near our line of spruce trees. I had just written in my email newsletter that finally things had stopped trying to flower…but wonder of wonders, the hellebores have decided that they are Christmas roses, rather than Lenten roses, and their flowers are formed and trying to open. 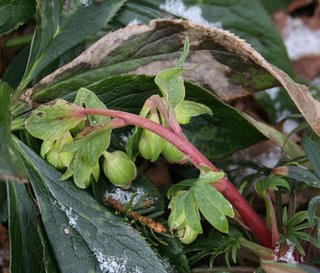 Now, I’m not sure which ones I have here; the three larger plants came from Springvale Nurseries, and I’m giving them the ol cold-test treatment. They’re probably orientalis hybrids; one was red, one rose and one greenish-white when I bought and planted them. There are also several other smaller plants tucked in here and there around the yard, including one that Kingstec landscape instructor and plantsman extraordinaire Jamie Ellison gave me (and I forget the species!). Here’s hoping that these plants manage to make it through; they’re certainly looking fine despite the variations on a theme of weather.

Finally, a few thoughts about the approaching holiday.

As I wrote in my newsletter, one of my favourite Christmas songs is by Greg Lake, formerly of Emerson, Lake and Palmer. Called “I believe in Father Christmas”, it starts out, “they said there’d be snow at Christmas/ they said there’d be peace on earth/ but instead it just kept on raining/ a veil of tears for the virgin birth…”

It’s a lovely, if haunting song, especially if you’ve ever seen the video. This song was released in the early 1970s, when the Vietnam war was casting a veil of tears over the world, and the video shows Lake playing his guitar and singing in a desert, possibly in Israel. Between verses there is an instrumental sampling, which is part of a piece by Sergei Prokofiev, called the Troika movement (Lieutenant Kije Suite, for a long-forgotten soviet movie.) At the end of the song, the troika repeats twice; in the video, there is a barrage of images from war; missiles falling on land; tanks firing; planes and helicopters unleasing their own barrage; then it seques to a soldier, returning home to his joyous son.

Why does this strike me so poignantly? Well, between our Canadian soldiers in Afghanistan, and our neighbour’s soldiers there and in Iraq…I’ve written before that I have no easy solutions, and I don’t like our people being over there; but since they are they I support them, and I hope that somewhere, sometime, there will come a solution so that there genuinely is peace on earth.

As the song finishes… “I wish you a hopeful Christmas, I wish you a brave new year. All anguish, pain and sadness leave your heart and may your road be clear…”