No snow, but lotsa wind! 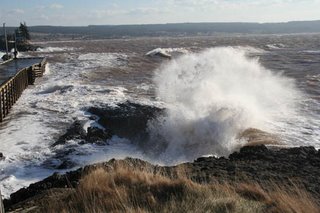 Time now for something completely different.

We live in Scotts Bay, a tiny community at the end of the North mountain in Nova Scotia's Annapolis Valley. We're technically not in the Valley, but rather on the mountain. Our community is also on the upper Bay of Fundy, known far and wide for the world's highest tides. If you look at a map of Nova Scotia, on the left (west) side of the province, there's a comma of land projecting out about halfway up the province. Looks like an appendix. That's the Cape Split peninsula, and Scotts Bay is nestled in the cove of that peninsula. Our tides are truly dramatic, coming in over miles of mudflats and causing the boats at the wharf to rise and fall as much as 30 feet between tides. At low water they sit on mud; at high water, they're almost flush with the top of the wharf.

We get a regular dosing of nor-west winds during the fall and winter, normally about the time lobster season begins in mid October. The boats are hauled up on dry land here for the winter now, however, and here's a good reason why: 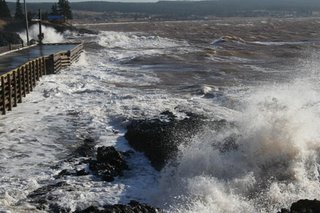 The boats normally are moored on the leeward side of the wharf, where it's somewhat calmer, but waves are smashing up and in some cases over the wharf on days like this. Good thing we build things tough in Nova Scotia.
These were taking at not-quite highwater a few hours ago; here's how we're bringing in solstice, winter, and the longest night of the year. 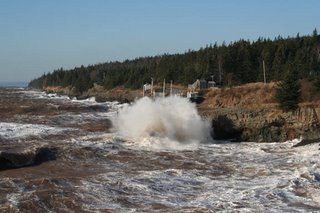 Of course, to really appreciate the contrast, you'll need to see photos at highwater when it's calm; and also at low water. Suffice it to say there's no dust down around the wharf today; and my hair still smells like salt water. Nothing finer--so long as we're not out on it, on days like this. 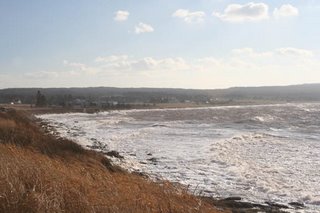 Days like this I'm very very glad, however, that my other half doesn't fish any more.