In the spring the gardener's fancy lightly turns to thoughts of....

...New Plants, of course! What were you thinking?

Yet another reason to support our locally owned and operated nurseries…without them, how would we gardening addicts get our fixes of unique, unusual, and rare plants? Can you see WallyWorld or Crappy Tire carrying Trillium luteum or Meconopsis grandis or Lysimachia ‘Beaujolais’? Or really special heaths and heathers? Or grasses that are so unusual it’s hard to even find out about them through Google? I didn’t think so.

Yes, I’ve been making the rounds, in between preparing to go to Ottawa for the 30th anniversary Professional Writers Association of Canada conference and AGM. Normally, five days away with a collection of my fellow colleagues is something I look forward to, and when we set the date for the conference two weeks earlier than usual this year, I thought to myself, “great, there won’t be anything much going on in the gardens, I’ll go to Ottawa and have fun and then come back to a fairly sedate set of weeds.”

Well, who’da thunk that this would be the year that spring actually came when it was supposed to?

I don’t remember when we last had a May as lovely as this one is being. Granted, the month is still only a few days old, but the weather has been mostly very wonderful…and the gardens have responded by leaping ahead at an amazing, even an alarming rate. I did manage to get a pile of things divided to donate to a plant sale for the United church in Canning, but there are still several beds that I’ve not even touched yet, either to weed or to divide and move things…and there are new plants lined up by the front garden fence, just waiting to be planted.

While I’ve yet to make my way to the south shore to visit Captain Steele and Alice and Ivan and all the splendid nurseries along that balmy route, I did make it as far as Upper Clements on Saturday, to see Jill’s new retail area at Bunchberry Nurseries. She and her staff have done a marvelous job of turning their former main work area into a retail shop, with all sorts of shrubs, heaths and heathers, alpines, and even some local artwork and crafts that are garden themed. While they haven't moved all their plants up to the outside sale area, there's plenty there to choose from... 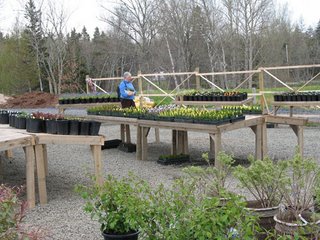 The display gardens are enough to inspire ANYONE to try their hand at conifers and ericaceous plants, with the subtle rainbow of foliage colours that don’t even require flowers to make a perfect planting.

Naturally, a few plants insisted that they needed to come home with me, including some small heathers; Con Brio, Boskoop and Cuprea, all of which tend to be russet to red coloured in the fall and winter. The other real delight was getting my hands on Lonicera ‘Mandarin’, a climbing honeysuckle developed by Dr. Wilf Nichols when he was at the University of British Columbia. Dr. Nichols is now at MUN Botanical Gardens in St. John’s Nfld, and I don’t know how many other plants he commercially developed, but ‘Mandarin’ is a beauty. It was flowering at Bunchberry last summer when I was there, and I was instantly besotted with it, and with ‘Graham Thomas’, a yellow honeysuckle with awesome fragrance, that was blooming beside it. Graham came home with me that day, and I’ve thought about Mandarin since then. Now it is here in our yard.


At Rob Baldwin’s a few days ago, I picked up a blue lacecap hydrangea (I think it was Blue Billows, but it and its tag are outside) to coldtest up here on our wild mountain. The ‘Endless Summer’ mophead hydrangea I got last year is awake and doing mighty fine already, so I’m thinking the lacecap can likely go in the same protected bed. Rob carries a wonderful variety of trees and shrubs, including many natives, and so three young Canada holly (Ilex verticillata) and one black chokeberry (Aronia melanocarpa) climbed onto the truck, together with a cutleaf elder (Sambucus) and a red flowering quince. Of course my darling longsuffering spouse just wonders where I’m going to put these things.

Today I had to go to Berwick on errands and stopped in at The Briar Patch Farm and Nursery. This is a great nursery too; always lots of interesting perennials, healthy shrubs, including a big selection of hardy roses, and great annuals. It was here I first found Anagallis ‘Skylover’ being grown, and they also always have heliotrope. Today there were just a couple of perennials that needed me; the red-flowered gooseneck loosestrife ‘Beaujolais’, and two trilliums; T. luteum, the yellow flowered species, and T. grandiflora, the big white one. I bought these mostly for my darling husband, who loves trillium, and was just going to tuck them into the shade bed and see if he noticed, but the yellow one is going to open shortly so I figured it was best to let him know. I tucked it in near a couple of bloodroot that are already flowering, and not far from the big clump of red trillium.

While planting I peeked around a bit, and could see the Mayapples were sprouting, as well as the oakleafed fern and a young hellebore; the hepatica is in full bloom as is Redstart Pulmonaria and several other varieties. Hepatica, or 'that liver plant' as my longsuffering spouse calls it, is a pretty thing, and usually the first perennial to bloom, but this year it's about fourth in the lineup. Here it is, being dainty and lovely in the shade garden 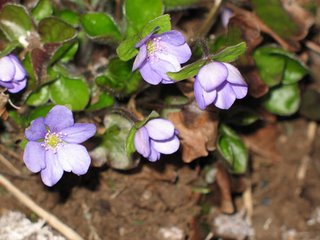 I’m not sure where the Jack in the pulpit is, but I bought that from Jane at Woodlands and Meadows last summer, I think, so if I need to get another one she’s the person to see. But it’s still early yet for many things, of course.

Good thing I can't bring plants home in my suitcase from Ottawa. But I'll take photos whenever possible.