From the fog zone 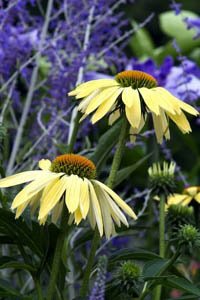 Why do you suppose that every time I plan a day of working in the yard, the fog rolls in thicker than oatmeal porridge?

Obviously, the weather is related to my horse, the same intelligent equine who can read my mind, and who rolls in the mud immediately after I have a thought about riding him.

Well, while I wait patiently for the fog to lift, I’ll catch up on my blog postings and tell you about yesterday’s road trip. And I’ll resist the urge to look out the window and watch the gardens grow.

Talk about growing…I’d estimate that the garden here is about three weeks ahead of where it was last year this time. One of the nice things about using a digital camera is that each photo is datestamped, at least as long as I leave it unmodified in iPhoto, and so it’s easy to figure out when I took that shot of the front garden or the closeup of the red trillium or the latest picture of helpercats in the beds. And we won’t even discuss the quality of the weeds—sometimes referred to as ‘native plants’ just to confuse other gardeners who think maybe I PLANNED all that couchgrass. Actually, aside from the big bed in the back, where 73 thousand teasel seedlings are waking up and stretching their little leaves sunward, the beds aren’t in THAT bad a shape. Mostly, I’m a bit piqued that I didn’t get everything divided that I wanted to share with others, and now we have gargantuan clumps of centaurea, and cranesbills, and daylilies, and other things. All in good time, however.

So, what does a gardener who is way behind in her weeding, pruning, dividing and planting do? Go out and buy more plants, of course!

Well, I needed a road trip away…so I jumped in the car on Friday and headed to the south shore, drove down to the furthest point I wanted to visit, and worked my way back from there. I only made it to four places all day, but they were all well worth the visit, of course. And I was really happy to hear from the staff at each place that they’ve been having a really good spring so far. Let’s hope that trend continues.

First stop was to see my friend Alice at Ouestville Perennials in West Pubnico. Alice is one of those independent nursery operators who not only grows and sells marvelous plants, she plants them all around her property in display beds. 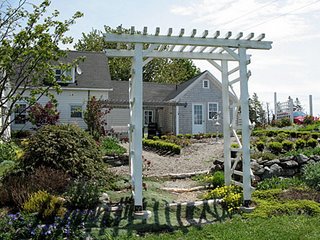 Her rock garden alone is worth the trip, and it’s inspiring me greatly…for about three years from now, when I get the bed built that I want! She also has turned her front lawn into a wonderful shade bed, featuring shrubs, hostas, and other beauties, with lovely pathways (including a thyme walkway, sigh…..) and she has several theme gardens including a formally designed rose bed that I hope to see in full summer.

I’m besotted with echinaceas, especially the new colours that have been developed by crossing E. purpurea with E. paradoxa, resulting in shades of yellow, orange, melon, gold…and adding fragrance to the mix.

Alice is carrying most of these new coneflowers, so of course they beseeched me to take them home and plant them…Off I went with Sunrise, Sunset, and Sundown, plus the shining coneflower Rudbeckia Herbstonne. They’ll look great with the Orange Meadowbright echinacea I got last year…

Next stop along my travels was Spencer’s garden centre in Shelburne. (1-877-870-3055) I’ve been going to Spencer’s since back in the days when we were building Lowell’s last lobster boat in Lower East Pubnico, and I always look forward to my trips to Spencer’s. Jim Spencer and his staff know their stuff and they also love plants; they have a lovely rockery out front which changes with the seasons, using some nice foundation shrubs and then complimenting with unique perennials, flowering bulbs, ground covers; 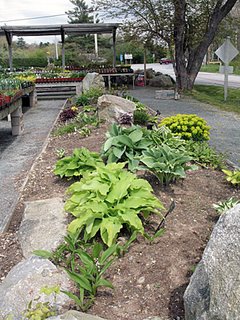 Spencer’s carries a really nice selection of perennials, though because it’s in the Banana belt I generally check to make sure something is hardy to my area. A really splendid red ornamental rhubarb caught my eye, as did an epimedium I’d never seen before, with orange flowers rather than red or yellow. A couple of small heucheras also wanted to come with me, and since I prefer to buy my perennials small and let them establish in our beds, I agreed that they could come along; Mocha Mint and Crème Brule are waiting to be planted after the fog lifts.

I often say that independent garden centres and nurseries are all in this together, and they need to work together to survive the attack of the bigbox bullies. Well, a lot of them do just that (and probably far more than I know about.) I asked at Spencer’s where the heck Lavender Hill was, because I didn’t want to miss it, and hadn’t been able to get information to post here earlier in the spring. The staff were happy to explain just how to find it—it’s not hard once you pay attention to turnoffs on the highway, of course—and off I went to see Madeline. (Exit 24 off the 103, Lake John Road; phone 902.875.4600. ) She and her husband Allison do a terrific job with annuals, shrubs, some perennials, including many that Madeline seeds herself. I resisted the urge to buy the Black Lace Elder, but what a gorgeous thing it was. Interestingly, Lavender Hill had this shrub last year…while Canadian Gardening magazine said it wasn’t yet available in Canada. Just goes to show that magazine needs to remember there is more to gardening in this country than the central provinces… 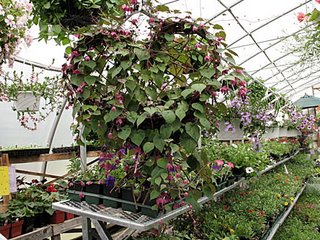 What really got to me at Lavender Hill, however, was a purple foliaged clematis, Clematis recta ‘Purpurea’. I didn’t even ask how much it was, I just WANTED it. It gets the small, starry white flowers later in the summer, and they’re supposed to be fragrant; while I know the purple foliage will fade somewhat to green as the season progresses, I love interesting clematis and this one is a beauty! Also had to have the Raspberry Wine monarda for Marilyn’s butterfly garden, and a white flowered thunbergia for my annual containers, and…well, you know how it goes!

The last stop for the day was a place I’ve heard about for ages but never gotten to visit; the Village Nursery in Pleasantville, outside of Bridgewater. Well. It’s one of those destination type places, a tiny bit out of the way to find the first time but then you’ve got it. I could have spent much more time, (and many more dollars) there, especially in the so-called Dazee Dome, where the owners keep all their annuals. Talk about a burst of colour! 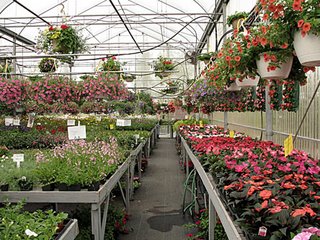 And I was especially pleased to see that they sell 4-packs of young perennials, and a good selection of them; some of those I brought home will flower this year, others won’t til next year, but that’s fine; there’s always enough going on in my garden to let young plants take their time establishing. There’s some really smart marketing going on at Village too; along with a print catalogue, which they’re cutting back on in size and turning more to email because of print/mailing costs, they have coupons giving customers a discount on a return trip; guaranteed to mean you’ll be back!

I’m really pleased to see how many nurseries are developing really good websites, and newsletters too. One of my favourites is Springvale Nurseries, which has three retail outlets around the province, in Hammonds Plains, Bible Hill, and Berwick (next door to Wheaton’s Store, truly a destination). Along with their website, they have launched their new newsletter; you can find out more about that and sign up for it at their website also. I’ll be doing talks at the Springvale outlets over the summer, so stay tuned for details there!

Wow...the fog is lifting...time to go get dirt under my fingernails!