From Ottawa, Live and in Colour 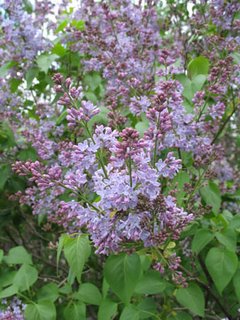 Remember how I said I wouldn’t be talking about politics in my blog entries? Well, this is a bit of an exception, although it mentions cats and plants too. So just be warned.

After many mutterings and complainings to my darling long-suffering spouse about having to go to Ottawa for five days in mid May….I’m actually quite enjoying myself.

One of my hats, other than my fabulous Lee Valley hat (and now my dear sister has one too!) is to sit on the board of directors of the Professional Writers Association of Canada.

Our National conference and AGM is going on, and since this year is our 30th anniversary, we decided to go to where the lawmakers of our country hang out—in Ottawa. Some of us have been to the Hill today to lobby members and make them aware of our concerns regarding copyright, low rates for writers, rights-gobbling contracts by the press equivalent of the bigbox bullies, and other issues.

I went out gollywalking instead. Wandered down Sparks Street to the pedestrian mall, went in and out of shops, visited the War memorial and paid my respects to the Unknown Soldier at the monument. Walked around all the tulips, deep wine in colour, solemn and yet hopeful, around that monument, and said a prayer for our soldiers in Afghanistan and elsewhere.

Some pocket impressions of Ottawa:
1. Wayyyyyy too many people smoke, and they all come outside to do it, standing outside office towers and shops and restaurants puffing their cancer sticks. I often wonder if people who smoke know either how dumb they look or how bad they smell. Apparently not, or they don’t care. But that’s their choice, not mine. I choose to avoid them whenever possible.

2. the traffic lights in this city are designed to intimidate pedestrians, especially the WALK/DON’T WALK signals. I defy anyone to get across ANY street in downtown Ottawa within the few seconds allotted to the blue WALK signal.

3. Everyone in Ottawa jaywalks or walks against the signals. See number 2 for explanation of same. I even watched people walk out across roads right in front of police officers.

4. There’s a lot of brick in the downtown area; not just on edifices, (also lots of stone) but on homes too. Lowell would roll his eyes and shake his head, but some of the homes I saw were really lovely, some old, some more modern.

5. There are lots of green spaces in this city. Besides the waves of tulips in beds and planters, there are parks, plantings, gardens, wild spaces…tomorrow I’ll get to see more of those but it’s nice to look out my window at the Delta Ottawa and see the river, lots of trees (in full leaf, of course) beds of flowers (yup, mostly tulips) and profusions of lilacs, dizzyingly fragrant and perfect.

6. You can always tell Maritimers. I entered the elevator this morning and there was a pleasant man who commented on the weather. I asked if this was a normal spring, and he didn’t know…as he was from PEI. Of course—no central Canadian would talk to a stranger in an elevator!

7. Food here is good and reasonably priced, especially in the ethnic restaurants. So far I’ve had Lebanese, Thai and East Indian food, including some dishes I can’t pronounce but found just dandy. People are polite and service prompt and pleasant. The water is drinkable, much better than in some places (including New Minas!)

I went to the Hill, but not to see politicians, though I have the greatest regard for my MP, Liberal Scott Brison, who is also running for the leadership of that party. Go, Scott, Go! He probably won’t win, because the centre of Canada couldn’t cope with a Maritime leader of the Liberal Party (and ultimately Prime Minister) but he’ll make a good run for it.

No, I went to the Hill to see the Cat Man of Parliament Hill

His name is Rene Chartrand, and he’s 85 years old. He’s been looking after the stray cats that hang out on the Hill since 1987, when he took over for another catlover who had been doing the labour of love for more than a decade previously. Rene built a set of ‘cat condominiums’ for the cats, who are all neutered, needled and mostly named, although there are a number who apparently come and go as they please. When I was there, the cats were all catnapping or off doing Parliamentary feline business somewhere else, but Rene was there, eating his lunch and then clearing up branches of shrubs that were broken off. The cat condos are behind the wrought iron fence that edges the Hill, and people can’t go in and visit, which is just as well for the cats…but I was talking briefly to Rene and to one large, elegant orange tom, who was very tired, yawned and stretched and went back to sleep, weary from his labours…. 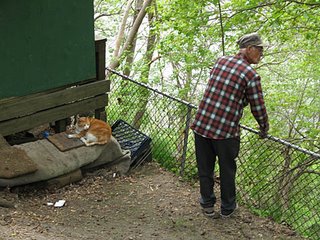 Now, here’s something that is very interesting to me. While I was out walking, I walked INTO a huge protest march, of Right to Lifers, or anti-abortionists, whatever you want to call them. It was somewhat surreal at first, because I met them as I walked up the Sparks Street promenade, and though there were hundreds, probably thousands walking, they weren’t chanting or singing, just quietly walking. And it WAS quiet, as if the downtown core was holding its breath. They were heading for the Hill, of course. I cut across them and went around, up the Hill to take photos and observe. Standing in the shadow of the Peace tower, watching these people and halflistening to them, observing a handful of RCMP and Ottawa police officers observing in a laidback way, I was struck by the contrast between this gathering and the concrete pylons near the American Embassy I had seen earlier. 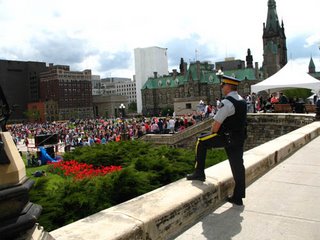 I also was struck by the floods of people all around the Hill, and the seeming lack of a security presense; a far cry from how it would be in other countries. I might not agree with the protesters who were on the Hill today, but I’d argue til the end of time for their right to protest. And it fascinated me that, despite my irritation with the Harperites, how fiercely proud I was to stand in our nation’s capitol, outside the buildings of our government, and watch all the goings on, Cat Man, Catholics, lilacs and all. 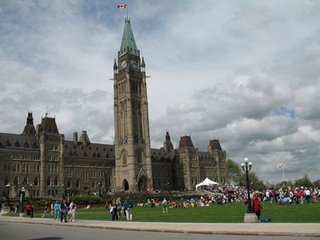 One sour note did pop into my head. While I was at the cat condos, a group from the anti abortion crusade came along, including one wearing the Roman collar. They stopped and read the sign about caring for the cats, about making donations, and the priest snorted. “what a waste of money,” he said as they moved away.

Oh really? Maybe he should have sung the hymn about all creatures great and small, or read the New Testement. The part about “whatsoever you do to the least of these my brethren, you do also onto me.” That God they worship made cats too, after all. If he/she/it does exist.

No wonder I’m an agnostic.