Interlude: My fondness for old buildings (& other things) 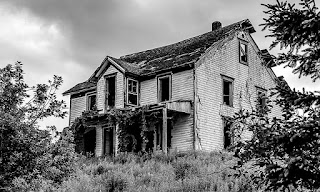 Long ago, I lived in a farmhouse with a huge, round-roofed barn in the back yard. The barn was in tender shape, gradually worn down over the years of use, elements and neglect. One day, it collapsed in on itself, and that was that. I wrote about that barn, and it was well-photographed in its day.
I'm not sure if that's where my fascination with old buildings began, but it was certainly nurtured by that event. 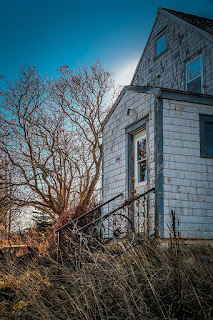 So I've been spending a fair bit of time in the past number of months making pictures of various buildings. Many are abandoned, and gone beyond help, like the famous one in Earltown in the photo above. Some are conserved by local groups, and some are well kept but elderly, with stories to tell.
Truthfully, they ALL have stories to tell, although I'm not sure who is around to share those stories.

Look at this house with the carefully built railing. Someone loved this place once. Now it, and its half-dozen outbuildings, stand empty, or at least uninhabited. 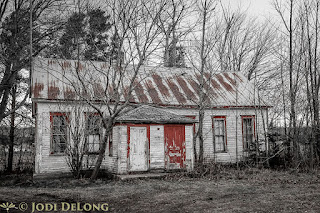 There was a time when many of us went to small schools such as this one (now, I believe, used as a hall, but possibly in private hands). My late grandfather owned a former schoolhouse in his community for many years before he finally sold it. Today it is a home, and well cared for by the look of it. So old schoolhouses draw me in. 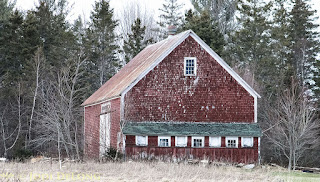 I know nothing about architecture. Zip, zilch, nada. I have an appreciation for older, well built buildings in part because they do stand the test of time. This barn further down the Valley is a beautiful thing, well cared for and still used, although I'm not sure for what. 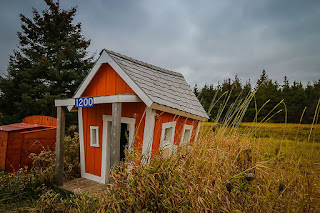 When I go on my jaunts around the province, I tend to go down sideroads just to see what's there. Sometimes, I find real gems, like this tiny crooked house at the end of a lane. Is it for kids to stand in and wait for the bus? Just an attractive thing to mount a civic address on? I don't know, but I do like it. 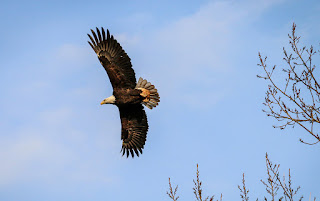 I will never be a wildlife photographer. I don't have the patience, nor the gear nor the ability to trek off through the wilds looking for wildlife. I do, however, have the ability to see eagles on a daily basis, and with a good lens and a fast shutter speed, I can get fairly good captures. 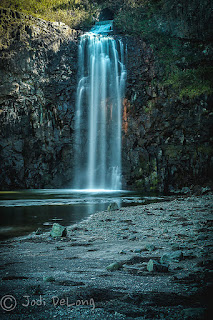 Water soothes me, being a child of the Fundy/Atlantic as I am.  I'm learning to shoot moving water in a number of ways, and it's a lot of fun--on a decent day when the wind isn't screaming sideways, of course! This is a waterfall at Baxter's Harbour, going through a man-made culvert under a road and then cascading down the rocky face to the beach. It's always a fascinating place to make pictures. 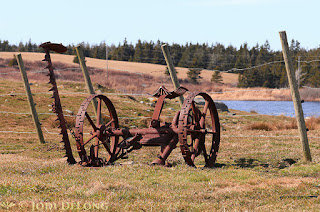 To go along with the old buildings, I have a fondness for old equipment, be it rusting cars, or farm gear like this ancient rake. This would NOT be a fun thing to ride on a hot summer's day! 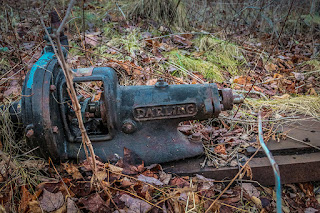 An old pump, someone told me this was. I was just charmed by the name. Darling pump. At an old farmstead. I'm surprised it hasn't been toted off and sold for scrap metal. 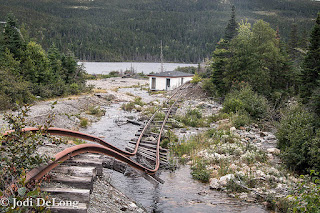 One of the oddest things I saw on my trip back to Newfoundland last summer was the abandoned Trinity Loop amusement park. I'll do a whole post about that in the future, but had to share this image of the Trinity Loop railroad track that used to run to the local communities off the main railroad line. When Hurricane Igor blew through the area in 2010, the flooding washed out the track quite badly, and further degraded the once busy park. It's kind of surreal to go back this road and find the remains of a ferris wheel, train cars, and other oddities. 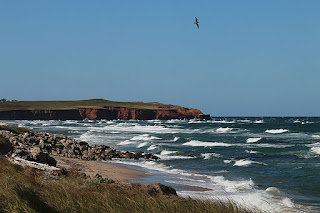 Another place I got to explore, although briefly, last summer was the Iles de la Madeleine, aka the Magdalen Islands. I fell in love with the place and the people, and want to go back. Soon. It's an incredibly beautiful place, part of the province of Quebec, and well worth the 5 hour ferry ride there to spend a few days. 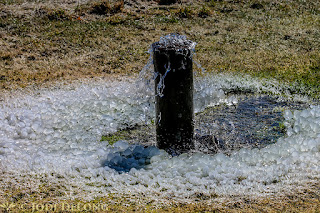 To wrap up this little essay of randomness, I always tell people it's good to keep your camera on hand at all times. You never know when you are going to discover a piece of 'found art' like the ice sculpture around this well. You just never know. Keep your eyes open and your camera close, and have fun--at least, that's my motto!