In the Pink (mostly) 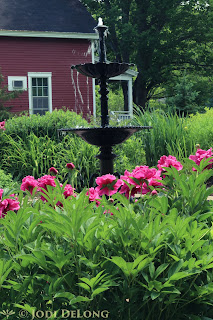 It's a brand new week, and we're thinking about spring. This past month has been pretty gentle, weather wise, with nothing like the snowstorms we had last year. Last winter, the mantra was, 'If it's Wednesday, there will be a storm'...for weeks on end! But as always, it eventually melted.

This week we're celebrating some of the many shades of pink that we enjoy in our gardens. I have been known to say I'm not really a fan of pink flowers--then I look at what I have in my own garden, and how many I take photos of, and I have to change my mind about that statement. It all comes down to the flower and the colour in question, doesn't it? Like peonies--I don't care what colour they are, I love them. All of them. All the peonies. All the time. 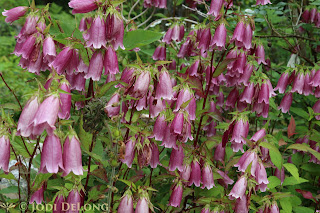 Campanula 'Cherry Bells' is considered a bit of a thug by some gardeners, but I've never found it hard to control. I love its long bloom period and its ability to cover itself in pink, nodding flowers. 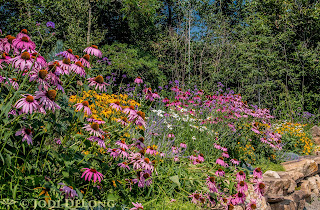 I have told this story before, and I'll share it again as I told it recently on my personal FB page.

My late beloved husband used to argue with me about purple coneflowers. "They're not purple they're pink!" "I know, dear.""So why are they called purple? What about the white ones? Are they white purple coneflowers?""Don't ask me. I don't make up the names." And so on.And as the variety of colours available increased, it grew more hilarious. "That orange-purple-coneflower-that-ain't-purple is bloom!"

And I love all the coneflowers, including those fabulous cultivars, but the basic, straight up, pink coneflower that isn't purple is still the very favourite. 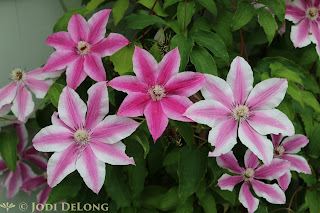 This clematis was growing beautifully in a yard on a garden tour in Chester last summer, and I really enjoyed its vigour. I suspect it is 'Nelly Moser' although the gardener didn't know the name. My own collection of clematis is gradually increasing, and they make me extremely happy. 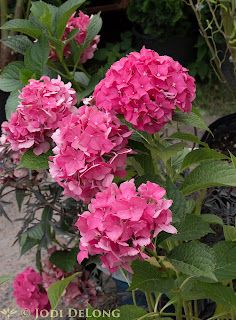 Although I personally prefer blue mophead or lacecap hydrangeas if I have a choice, the pink ones are pretty fabulous, too. I actually bought a dwarf one at the grocery store this week, pre-Easter, and it's a pink/green one that is pleasing me greatly. This photo, however, is a mophead outdoors at a nursery, name unknown. Incidentally, I don't bring lilies into the house ever, because of the cats, but I love having a small hydrangea inside as we lurch toward spring. 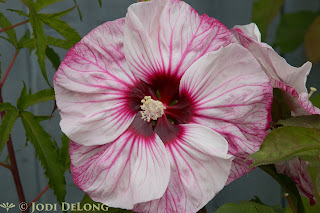 The luna hibiscus variety 'Cherry Cheesecake' gobsmacked me last summer with its brilliant colouring and the way the colour flows into the veins of each petal. I did not purchase this one--not yet, anyway--but the hardy hibiscus varieties have been doing well for me here in Wolfville so I think this summer I'll add this one. 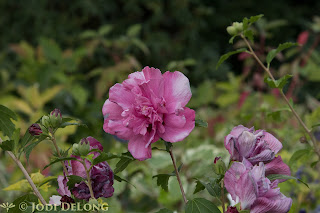 Another hardy hibiscus shrub, but I couldn't find the name of this variety in my notes. Normally I can figure out where it was based on where it is in my photo library, but I was visiting someone else's garden (again on a tour) so it remains a mystery. It's inching towards lavender in colour, especially as the petals age, but it's a beautiful thing. 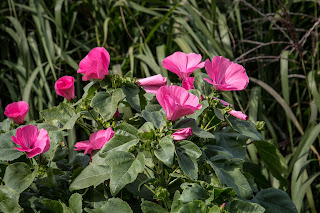 All the hollyhock relatives like mallow and lavatera make me happy, like this annual variety blooming its face off in another private garden. Some of them selfseed, but I've never found them probelmatic. Pollinators also love them so that's another great reason to embrace them in your pink plantings. 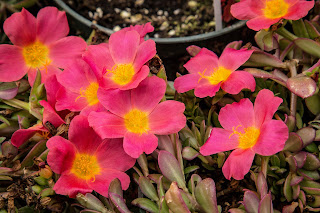 This portulaca relative is called Purslane, and this is one of the Yubi series of cultivars. I love the incandescent colours of portulaca and purslane, and plant them in containers for brilliant pops of colour throughout the garden. 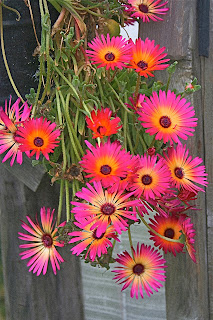 This is an old photo, but I wanted to include it, speaking of flamboyant flower colours. This is annual ice plant (Mesembryanthemum), also known for its iridescently gorgeous flowers. Gotta love those African daisy species. It's a bit fussy in growth habit and behaviour but I have to grow it every summer for those colours! 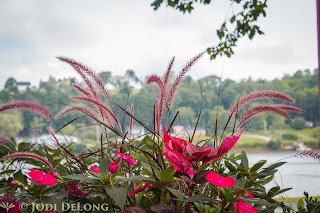 Pink isn't just for flowers--there are plants with pink in their foliage, perhaps the most commonly known being the dappled willow, Salix 'Nishiki'. But there are also houseplants that feature amazing pink in their foliage, like the bloodleaf in this container planting. It perfectly echoes the hot pink impatiens, and is more gently echoed by the softer pink flowers of the pennesetum grass (likely 'Fireworks'). I really like this container (it was in a public planting in Mahone Bay, NS.) 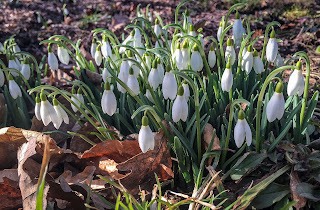 Wait a minute. These aren't pink.
No, they certainly aren't. They're snowdrops. And they're blooming now, and have been for several weeks.
Definitely an easier March than we had last year! Last year we never saw the snowdrops before mid April--and even later in some areas.
We'll take this weather.