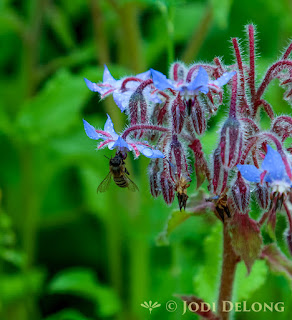 Of all the colours of flowers out there, the ones that make me the happiest are always some shade of true blue. I say true blue because so many flowers that are described as being blue have actually some tint of purple to them. But there are all kinds of plants with flowers in shades of blue from pale to deep cobalt blue. This week's Fleurs du Jour celebrate those true blue delights. To lead off, one of the many members of the Borage family that boasts blue flowers, in this case, the actual herb borage itself. (With some sort of pollinating fly/bee mimic hanging from one flower.) 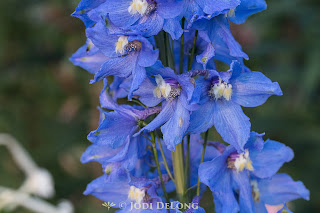 Of course, one of the showiest of perennials, regardless of colour, is the delphinium. I love its tall, elegant spikes of flowers, even if their bloom tends to correspond with the annual peony and delphinium wind and rainstorms! I like to plant my delphinium near something like a sturdy shrub to help prop them up without a lot of stakes... 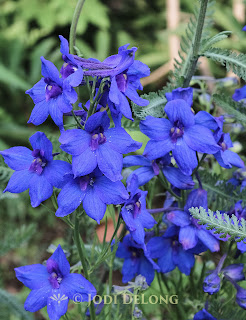 Another answer to stake-avoidance is to plant the dwarf Chinese delphinium cultivars, which aren't as stately but tend to flower quite profusely. My biggest problem with these is that they don't live as long for me as do the standard varieties, but I love them anyway. 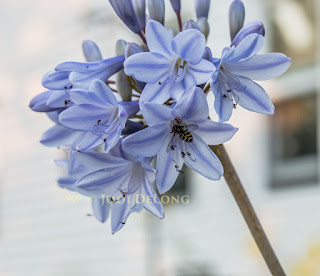 Some years ago, I got an agapanthus, aka lily of the Nile, from a now-closed nursery. I have two different varieties now--this one, with its delft blue and white flowers, reminiscent of the lovely striped squill (Puschkinia) that blooms in spring. I've divided and shared this agapanthus with a number of friends--it rests in my basement all winter, and in spring comes up to spend the summer outside, charming pollinators and people alike. 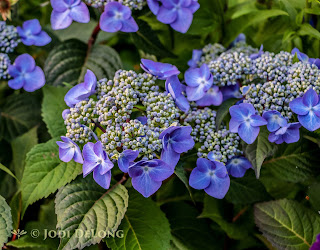 You can see the purple creeping into the blue florets of this 'Twist and Shout' lace cap hydrangea, but the predominant colour stays blue in my garden. I love the elegant look of lace cap hydrangeas, more so than mop head forms, and the fertile, less showy flowers attract pollinators, too. 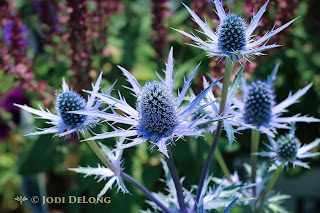 Everyone has their top-ten perennial species that they can't be without, don't they? Sea holly (Eryngium) is one of mine: long blooming, pollinator-attracting, and many different species and cultivars to choose from. This is 'Big Blue' which has large cone-shaped flowers surrounded by metallic blue, ruffled bracts. It adds great texture to any perennial planting. 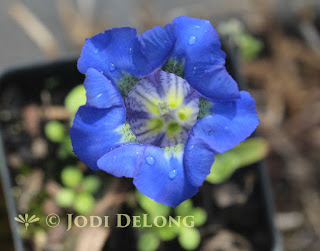 While I still grow a few blue poppies (Meconopsis), they drive many gardeners to distraction with their diva-like behaviour. For a truly blue, and less troublesome, perennial, try Gentiana (gentians) instead. Their flowers are gorgeous, many with striped buds that open to cobalt or gentian-blue flowers, and with a little planning, you can have species that bloom in mid to late spring, summer, and well into autumn. I think I have...ten or so different species now. My fondness for collection cultivars and species of a particular genus never changes! 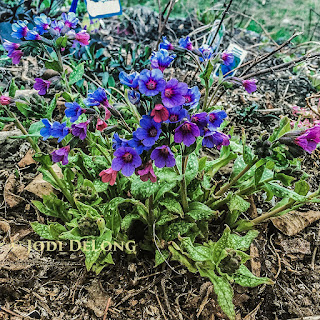 Pulmonaria is another of my top-ten perennials, and warrants an entire post a little later this year. Whether you call them lungwort, Bethlehem sage, lords and ladies, William and Mary, or by some other name, these borage relatives are fabulous. They bloom early in the spring--some of them are hardly out of the ground before they're in bloom--they have silver-splashed or spangled markings on their foliage, and their pink buds open to blue flowers. Some few varieties have white or red or rosy pink flowers, but the blue ones are my favourites. 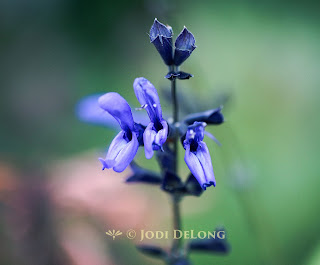 To wind up this ode to blues, let's have one of the annual salvias. 'Black and Blue' is well named for its black stems and buds and its cool blue flowers. It also has fresh bright green foliage. I've been growing it for years, and while it pouts in the spring if the temperatures are too cool, once it settles in it blooms all summer and well into autumn. I especially love blue flowers in late summer when so many others flowers are int he red, gold, copper and orange colour palette.

Hopefully you're inspired to add some blue to your garden colour scheme, if you haven't already! Tell me about your favourite 'true blues' in the comments below.