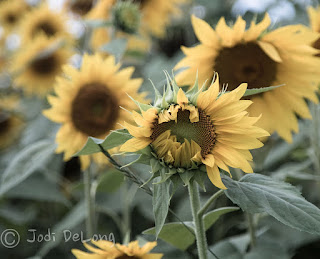 Yellow is a fascinating colour in the spectrum. It can be soothing, cheery, brassy, over the top or just simply lovely. I remember the yellow kitchens of my childhood, where the paint was a lemon-pie yellow--ugh. Where I live now is painted all through in a soft yellow not unlike the colour of the sunflowers of this image, and it's calm but cheery. On sunny days, my place is warm and bright; on dull days like today (recuperating after the snowstorm of yesterday), it's still bright and cheering. 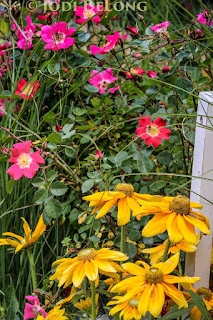 This rudbeckia is a little harsher yellow, (I believe it's 'Prairie Sun') but it pops magnificently against the tangle of roses behind it. 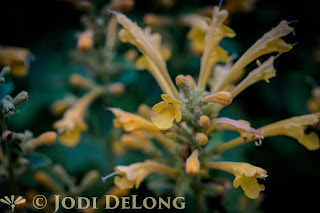 There has yet to be a yellow agastache developed that is hardy for my garden. Despite this, I faithfully buy them as annuals every year because I love all agastaches, their flowers and lemony scent, the way the pollinators flock to them. This is 'Summer Glow'. 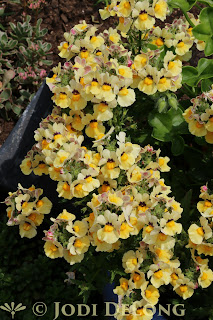 Nemesia is an annual that is growing in popularity every year, and I'm pleased to see that. Some cultivars are fragrant, like 'Opal Innocence', but this one is 'Sunsatia Mango' and I don't remember any fragrance, just floriferous enthusiasm. 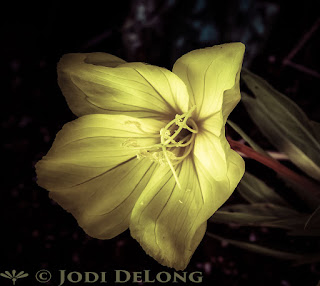 Some of the evening primroses (Oenothera) are quite brilliantly yellow, including this Missouri sundrop (O. missouriensis). It has large flowers that were a favourite of my beloved and much-missed mother. So they will always be in my garden. 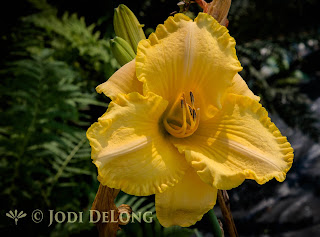 Of course there are a bajillion yellow daylilies, and they all have their charms. My personal favourite, however, comes from Canning Daylily Gardens, bred by the late Wayne Storrie. I know I've mentioned this plant before, called 'Pride of Canning'. It is vigourous and prolific, producing buds well into the fall; somewhere, I have a photo of it pushing buds with frost on them, taken in November of that year. I'll be able to split and share mine this year, the way it grew last year! 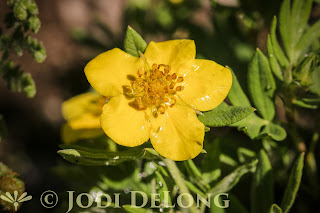 Yellow is an important colour in wildflowers, too, and no less beloved because it's commonly seen in buttercups, dandelions and wild mustards. This plant is a cinquefoil, (potentilla) blooming in the Harriet Irving Botanical Gardens, one of my favourite places in Wolfville. I am not certain which species it is (I only took a closeup of the flower and not the whole plant) but it could be P. canadensis, the dwarf cinquefoil. 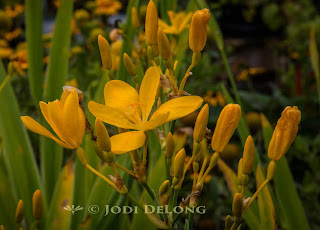 I love the blackberry lily (Belamcanda, which has apparently been reclassified as Iris domestica, which I don't much like). Normally, it's a cheery orange with red markings on it, but last year I got my hands on a new one 'Hello Yellow', which boasts cheery yellow flowers. IF it survives (I didn't plant it in the ideal location), I will move it to be with its common relative this spring, which has been vigourous and hardy. 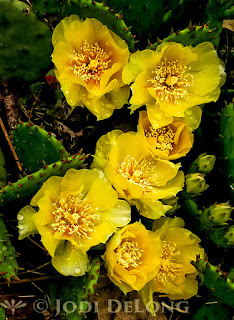 It was a surprise some years ago to find out that we can grow Prickly pear cactus (Opuntia) here in Nova Scotia without any problem. The display at the NSAC Rock Garden (which is now Dalhousie Agricultural Campus but I went to NSAC, dammit!) of various opuntia species is fantastic--with flowers in shades of yellow, pink, red, and probably more to come. I have only one--so far. My friend Rob of Baldwin's Nurseries in Falmouth is propagating a number and has them for sale. 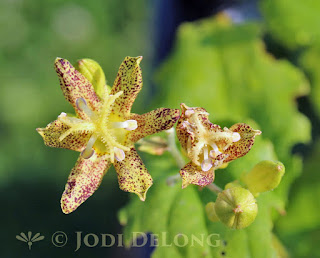 When we think of toad lilies (Tricyrtis) we generally think of flowers in shades of purple, white, pink, with spangles and speckles and splotches. Meet 'Golden Festival', which has yellow/purple flowers. It blooms earlier (in my garden) than do the cultivars like 'Taipei Silk' and 'Empress', by about a month. I find they want good drainage for overwinter, but give them that and they do well. 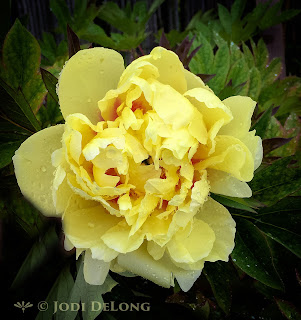 To wrap up this week's yellow love-fest, one of the tree peonies in brilliant yellow. I have a yellow tree peony, but I moved it twice before landing here at my current abode, so it's been growing but not flowering. I'm hoping this will be the year for it to bloom, and join the other riot of peonies in my garden.

That's it for this week. Tell me what some of your favourite yellow flowers are!