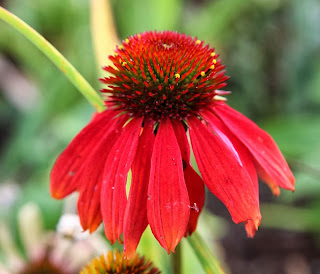 It's little more than an hour until Autumn arrives in Nova Scotia (local time for the autumnal equinox, 1744, or 5:44 pm if you only speak in twelve hour clocks). At times in the last couple of weeks, it has certainly felt like autumn, with cooler days and nights, and of course, that annoying loss of after-supper daylight. Today, it's subtropical here, as some sort of a weather front is pushing in with high winds and warm temperatures and supposedly some rain eventually.

If you have been following along over the past few years, you know I encourage people to keep on planting until you can't get a shovel into the ground, and to plant later-blooming shrubs, perennials, and trees. And to deadhead and fertilize your container plantings, to keep them blooming; and to embrace later blooming annuals for refreshing your containers. So I can report lots of colour in my little garden, how about yours?


Leading the charge, above, is 'Cheyenne Spirit' echinacea, in one of its colour forms. I have half a dozen of this new All American Selections winner, and each of them has different coloured flowers. I am very impressed with this coneflower, and hope it holds up well over winter and next year. 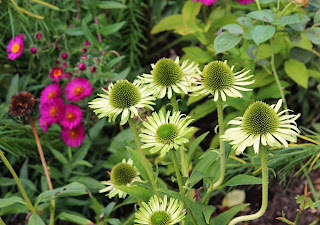 One of the first echinaceas I re-acquired this year is 'Green Jewel', a Piet Oudolf introduction. It has light green petals and rich green cones, a nice fragrance, and is a mid-sized plant, not as tall as some, and with strong stems. A star in my books. 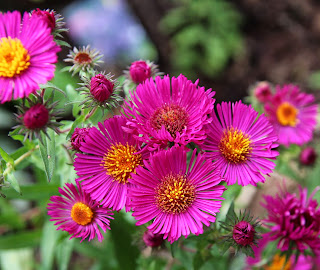 I gave a talk on planting for pollinators this morning at Baldwins Nurseries in Falmouth, as part of the Bee School workshop that was going on. Among the plants I most recommended for bees and other pollinators are the asters: all of them, wild or cultivated, tall or short. This striking variety is called 'Crimson Brocade', and I am loving its hot colour. 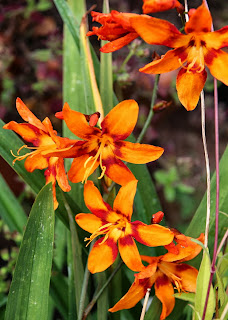 This is the latest flowering crocosmia in my garden: 'Emily McKenzie', which is quite different from 'Lucifer' and 'George Davidson'. The flowers are quite large and very showy. I am going to mulch this well as it can be marginally hardy in these parts. 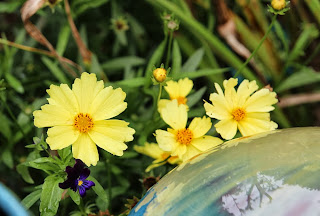 I have several new coreopsis this year, along with the old faithful 'Moonbeam'. This is 'Full Moon', which has larger flowers and a more coarse foliage, but is a soft yellow, a bit of a welcome relief when compared to some of the more orange-yellows of this time of year. 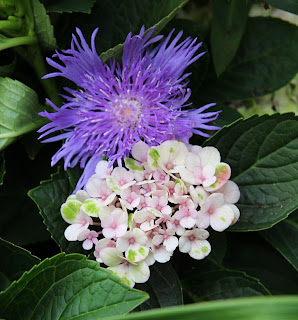 Two terrific performers, one perennial, one shrub, in this photo. 'Purple Parasol' Stokes aster (Stokesia) nestles up against 'Everlasting Revolution' hydrangea. Having seen this hydrangea in Quebec City at the garden writers conference, I simply had to have it. So I do. The Stokes aster is one that I love, and seems to be somewhat underutilized. Give it good drainage, and it should do fine for years to come. 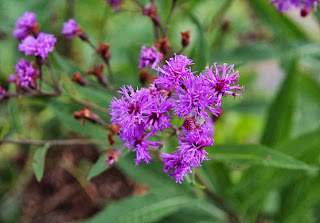 And this is another underutilized perennial, although those of us who know it, love it. It's Ironweed, Vernonia (not to be confused with Veronica) a tall North American native. This particular species is V. crinitia 'Purple Bowl', and isn't as tall as V. novaboracensis, but is a spectacular pollinator plant and a late season riot of colour. 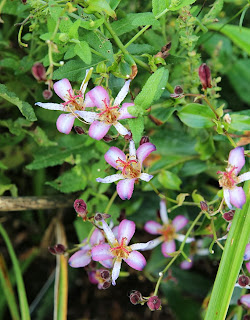 For some reason, toad lilies don't get nearly enough love, either. Maybe it's their name--their botanical name is much nicer, 'Tricyrtis', with this variety being 'Taipei Silk'. It doesn't have as strong blotches and markings as some of the others, but it is very floriferous and the colourings are subtle and lovely. 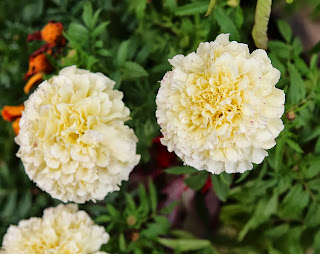 A few weeks back I bought several containers of fall blooming annuals at Hillendale Perennials in Hilden, NS. Lloyd Mapplebeck is a true plant addict, and loves to come up with new combinations of colours and textures. One of my planters includes 4 different types of marigolds, with these huge offwhite ones being my favourites. 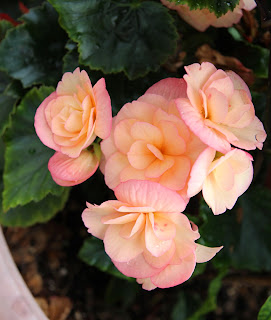 One of the non-stop begonias is worthy of its name, as it has been blooming with no pause since I brought it home in June. I'm about to bring it indoors and see how it fares over winter, as it is so beautiful and I need flowers indoors to help me cope! 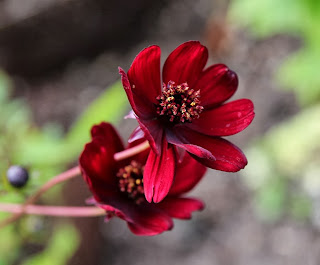 I was SO pleased to find that chocolate cosmos, a tuber-forming species of cosmos, has become more widely available thanks to the people at Proven Winners. If you've not grown this annual before, it DOES smell of chocolate--and if you keep it deadheaded, it keeps right on blooming until frost. Dig the tubers and store them overwinter as you would a dahlia, or just let the compost take them if that's too much bother. 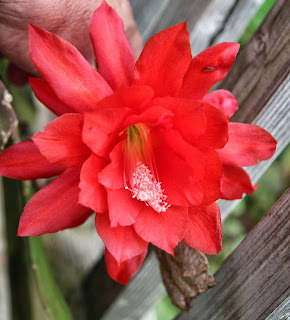 I'm about to bring my orchid cactus in for the winter, and it decided to celebrate that with a huge new flower. It bloomed like a maniac back in May and June, and I am hoping once it's indoors it will push another flush of buds. 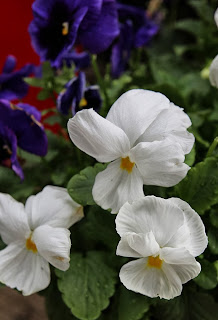 Last but not least, the lovely, humble pansies are refreshing themselves now that the main heat of summer is gone. If you let yours sort of melt away, a lot of nurseries are carrying pansies in their autumn plant lineup, so that you can refresh planters with a cold-tolerant plant that will last until a hard frost--and may even come back next spring.

What's still blooming in YOUR garden?