The Garden Colours of August

It's late August, somehow--after a slow, cool start to spring and summer, things have become rather hot and dry in the past couple of weeks. I hear people lamenting a lack of colour in their gardens, and I'm not sure why. 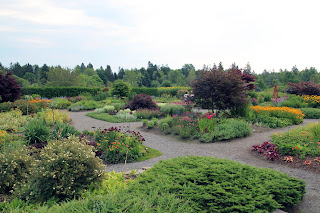 Recently, I went to Quebec City to attend the annual Garden Writers Association symposium. While it was far from the best conference I've ever attended--though I saw some friends and made a few new ones, I found the overall group very clique-ey, like high school--, there were some interesting moments, and I got to meet some terrific folks at the trade show, like Angela Treadwell-Palmer of Plants Nouveau.

But the highlight of the whole road trip was my side excursion on the way back home: going to Kingsbrae Garden in St. Andrews, New Brunswick, which is tied with the Rock Garden at NSAC for my favourite garden. 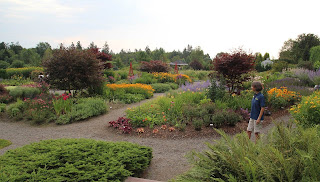 It's a long drive from St. Andrews to Wolfville, so I don't get to Kingsbrae nearly as often as I'd like: usually every two years. I'll do a more dedicated post about Kingsbrae soon, but I wanted to highlight the perennial gardens for your viewing pleasure. 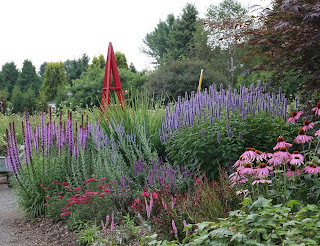 Do you see a lack of late season colour here? Neither do I! The perennials include coneflowers, hyssop (Agastache),  Russian sage (Perovskia), blazing-star (Liatris), helenium, rudbeckia, sea holly (Eryngium), among others. Deadheading helps to encourage many perennials to keep pushing the blooms, so if you haven't been deadheading, get thee outside with some snips and lop off some spent blooms. 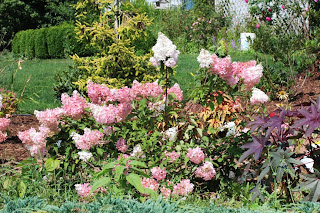 A lot of nurseries have great display gardens which also help to encourage and inspire gardeners at this time of year. It's not too late to plant perennials, shrubs, trees, grasses. Far from it! This is a good time to plant, as the usually cooler evenings and more rain help to give freshly installed plants a good settling in period. This display garden is at Briar Patch Farm and Nursery in Berwick, Nova Scotia. 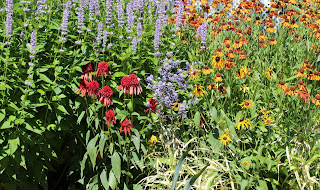 One of my projects this spring was helping to revamp the Horseshoe-shaped Perennial bed surrounding the big fountain at the Blomidon Inn in Wolfville. We removed some over-enthusiastic irises and common daylilies, added many loads of compost, some Irish Moss meal from SeaBoost, and a variety of perennials, chosen for foliage as well as for bloom performance, from Baldwin Nurseries in Falmouth. Among the perennials we added were Agastache 'Blue Fortune', Helenium 'Moerheim Beauty', and Echinacea 'Hot Papaya.'

We are very pleased with the work in progress that is this garden, and as you can see it is awash in colour now! 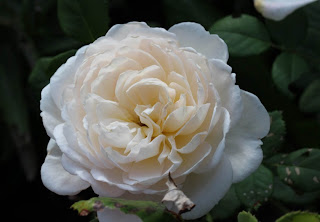 I'm pretty faithful at deadheading my roses, prompting a fresh flush of blooms out of them. Having a smaller place meant I had to select roses with care, but it will be no surprise to learn I planted a few Austin roses. I actually moved several of them from my former home, including the delicately tinted 'Crocus.' 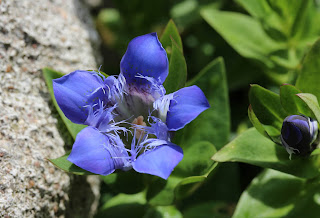 I love to use blue flowers at this time of year, as a cooling counterpoint to the hotter shades of the late summer and autumn. Gentians such as Gentiana septemfida are blooming now... 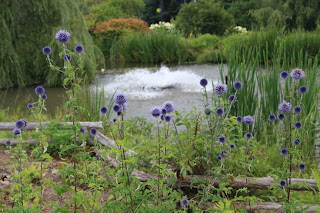 Globe thistles (Echinops ritro) put on a cooling blue display, are very attractive to hummingbirds and other pollinators. Here a drift of them is backdropped by a fountain at Kingsbrae. 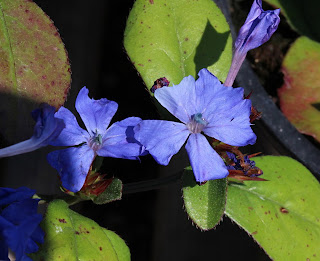 I don't know why more people don't plant blue leadwort or plumbago, (Ceratostigma plumbaginioides) unless they have had trouble overwintering it. It is a gorgeous groundcover, with striking blue flowers and rich green foliage that displays good fall colour, too. It blooms late in the season, and the secret to success with it is to put it in well-drained soil, the same as you would echinaceas, Russian sage, or yarrow. 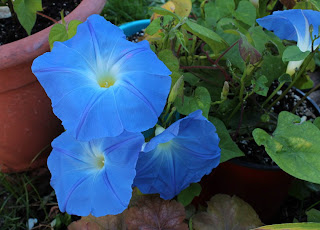 I love morning glories, and was pleased to find some already-started plants at Lavender Hill Nursery in Jordan Falls, on the south shore between Liverpool and Shelburne. 'Heavenly Blue' is my favourite morning glory, and its pristine blue flowers have been pleasing me for weeks. 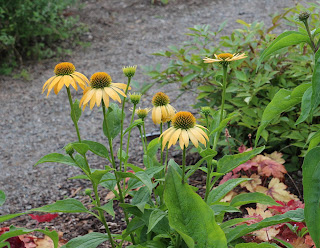 It's also no secret that echinaceas are my favourite perennial, whether the regular native species or the funky newer colours. This is 'Harvest Moon', putting on a nice display. Keep them deadheaded, and they will keep blooming for weeks to come. 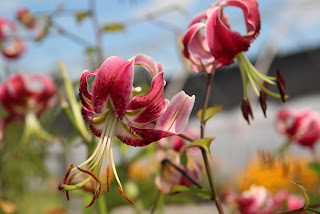 Although I encountered a few scarlet lily beetles this summer, I killed them all and was rewarded with great blooms in the lilies I planted and transplanted from my previous life. This is 'Black Beauty', a gorgeous and fragrant orienpet (oriental-trumpet hybrid) which is, apparently resistant to that nasty beetle. 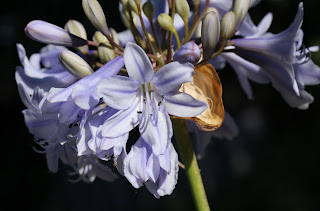 Last year one of the last plants I purchased from den Haan's before they closed their garden centre in favour of expanding their vegetable production greenhouses was a pot of Agapanthus. It has been blooming exuberantly for weeks now, and is still pushing new flowers. It has to be brought indoors to overwinter, but I am perfectly fine with that. Still have some weeks to go before the house plants move indoors, and they're enjoying life outside.

These are just a few of the colours of late August--are you inspired yet?