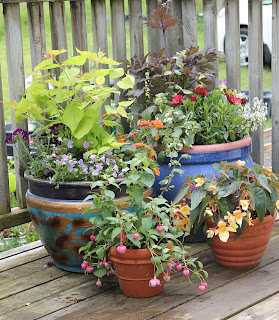 I have a good excuse for why I haven't posted recently--I've been too busy planting containers, planting perennials, making a garden area, reclaiming other spots...dirt under my fingernails, soil in my shoes, I'm a happy camper. But now, to have a little chat about some of the annuals that have turned my head this season--so far. 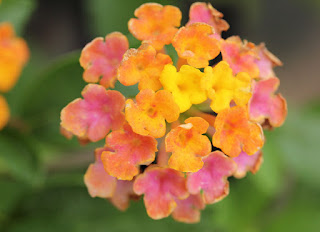 Let's kick off with one of my hands-down favourite annuals, Lantana. I love the way its individual florets change colour as they go from buds to open blossoms on each flower head. They're like a little rainbow of pinks, oranges, reds, yellows and inbetween shades. Someone had fun naming this one, from the Santana series: it's called Banana Punch. Sounds like a Doctor Suess plant; Santana Lantana Banana! Or maybe, like a song sung by Minions...? 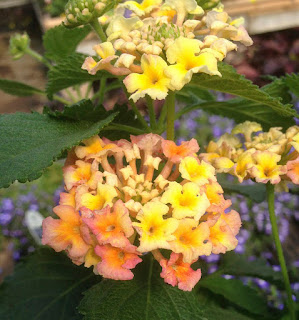 And from the Bandana series, here's 'Bandana Peach', which has softer shades than some of the varieties. I am liking it a lot. 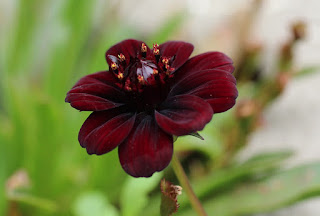 Chocolate Cosmos (Cosmos atrosanguineus) has been around for a number of years, but it's been glommed onto by one of the big plant breeders, which may be a good thing, making it more available. This variety is called 'Choca Mocha', and it is fragrant as all get out (yes, it does smell like chocolate!). I have half a dozen of these in containers around my deck so I can always smell them. 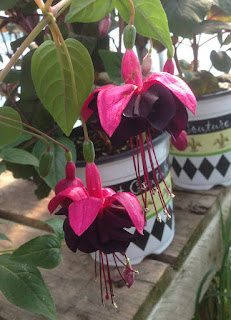 From the nice people at Hort Couture plants we have 'Midnight Blackie' fuchsia, which I love for its strongly contrasting blooms. It's now in a planter with Euphorbia Bling Pink Princess and a salvia I'll show you shortly, and it looks terrific. 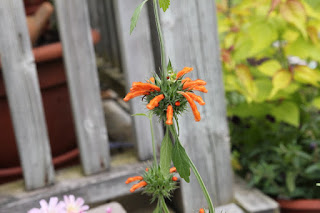 Speaking of Doctor Suess plants, here's a good candidate for such a garden: Leonitis leonuris, also known as Wild Dagga or Lion's tail. It is in the Mint (Lamiaceae) family, and reminds me of agastache in its fragrant foliage. Pollinators love it, and it makes me chortle when I look at it. Apparently there is a white form, too, but I prefer strong colours in my plantings so orange it is. 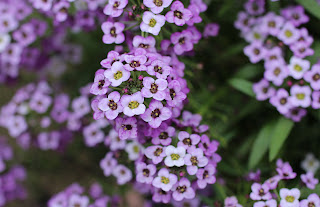 Another fragrant charmer is the easy to grow annual alyssum 'Lavender Stream'. It is delightfully scented, and I'm seeing lots of bees around it in my plantings. I have another alyssum with white flowers and variegated foliage which is also performing beautifully. These newer ones are supposed to bloom well without deadheading, but I like to shear them back a little to keep them bushy. 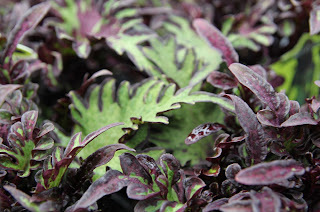 Ah, coleus, I do love thee. These aren't our grandmother's somewhat boring coleuses--these are funky of colour and leaf form. From the Under the Sea series from Hort Couture, this is 'Little Shrimp.' 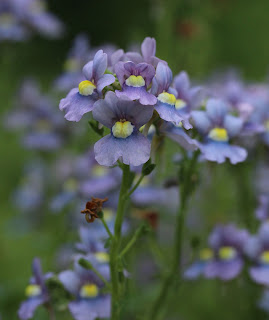 I am very fond of nemesias, which do very well provided they are deadheaded and sheared back to keep them bushy and pushing new flowers. This variety is called 'Sky Blue', and I thought it might be fragrant like 'Opal Innocence', my alltime favourite, but it isn't. It's forgiven that lack of scent, however, because it has such lovely colouring. 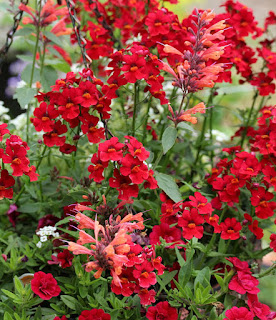 This is a planter done specifically for pollinators, with a double-flowered callibrachoa, hummingbird mint 'Acapulco Salmon & Pink', and Nemesia 'Sunsatia Cranberry'. The hummingbirds have started to find it! 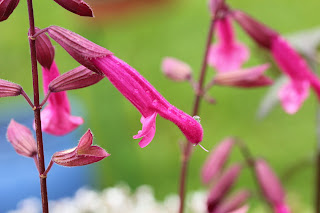 Another relative of agastache and leonitis is salvia, of which there are many annual and many perennial varieties. This is an annual called 'Wendy's Wish' that is spectacular--huge, hot-pink  tubular flowers on burgundy stems. I can't remember if it has scent or not, and I'm not going to trip outside in the dark to find out. 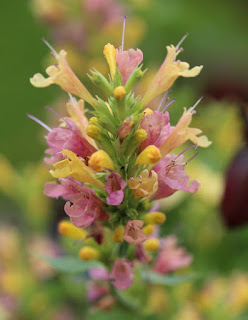 Another agastache, this one called (appropriately) 'Acapulco Yellow and Pink'. I don't find it as fragrant as Salmon and Pink, but I do love the colour combination. 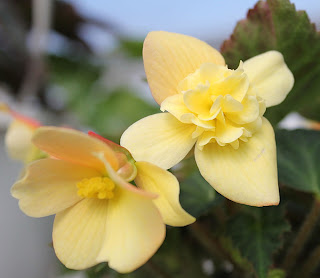 I used to not love begonias very much, because their flowers looked plastic to me, or they resembled roses except lacking in any scent. Then the Nonstop series seduced me with their huge flowers and colourful foliage, and this year I'm branching out to other varieties. This one is called Sherbet Bonbon, and while the flowers aren't as huge as the Nonstops, they are incredibly prolific in numbers. I am growing this plant by itself in a clay pot and love the way it is filling out. 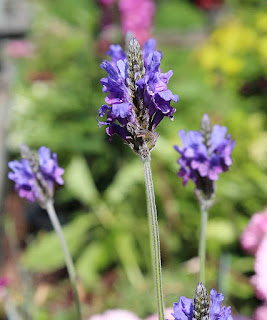 Now that I am away from the fog and the cold clay, I hope to have more lavenders around my garden. This is actually an annual lavender here, hardy to only about zone 8--Lavender 'Spanish Eyes', a fern-leafed form with lovely flower spikes. They aren't as fragrant as our perennial lavenders, but they are strikingly attractive, don't you think? 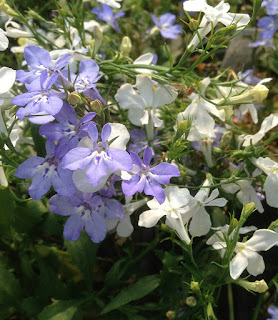 A few years ago, plant breeders came out with some lobelias that are tolerant of heat, and that was a great joy to me. There is the Laguna series, and the Technoheat series, of which this photo shows both blue and white Technoheat varieties. They don't melt down in mid July like the old seeded varieties, but hold their own nicely well into autumn. They have bigger flowers too, just not as many colours as the old forms--so far. 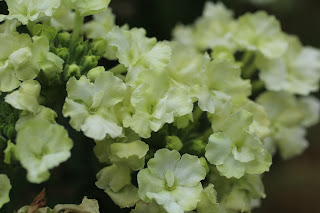 Sometimes plant breeders are a little excitable and hyperbole-laden in their descriptions of new varieties. I'm not sure that I would call this Verbena from the Lanai series 'Lime Green', but there is definitely green tints in the flowers, especially their edges and centres. This is my photo and isn't Photoshopped, unlike some I've seen online. I have always had a fascination for green flowers, and got my greedy little paws on the perennial primula 'Francesca' a couple of weeks ago. This verbena is very floriferous in its container, and I hope to see it around for years to come. I have several other new-ish varieties, but I can't remember their names so they'll have to wait til next time!