When Yellow isn't, and On the Road Again (soon) 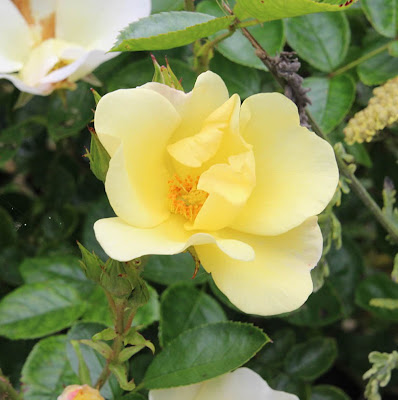 Once again I am madly charging along trying to catch up with the rest of the blogosphere, and have been absent without leave. Or is that without Leaf? In truth, between plenty of work, some family matters, mostly quite pleasant but time consuming, new kittens, and other entertainments, it's just a very full time of year. There's way more social media to follow now than there was even two years ago, and there's no way I can keep up with all of it, so I don't even try. I do read blogs but don't comment too much because I often read them at night in bed on my iPad, and I dislike typing on that. I don't have those 20-year old flexible thumbs...

The next two weeks are busy, and I do mean busy, as I combine book sales with garden talks and article research. This week, Thursday sees me doing a morning Talk, Tea, and Walk at the Carmichael Stewart Museum in New Glasgow, 11 am-130 pm. I'm looking forward to this especially because it's a fundraiser for the Museum, so I hope we have a good turnout.

After I leave New Glasgow, I'm off to the Other Island, Cape Breton Island. Hugely looking forward to that as well, because I'll be doing two events at The Bayside Garden Centre and Farmer's Market in beautiful Whycocomagh. (If you don't know how to say that name, you should come visit and we'll teach you). Friday, I'll be at the Farmers Market with several other authors, and we'll all be reading from (or talking from, in my case) our books and doing sales and signings to coincide with the grand opening of the Market. Saturday, I'm scheduled to do one or two seminars on "Never too late to plant!" and hopefully doing more book sales and signings. 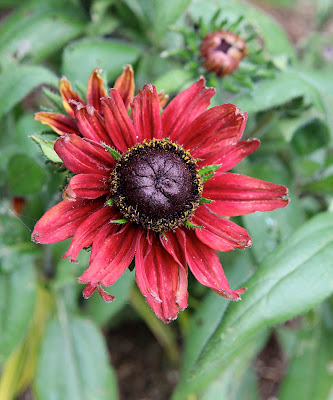 Next week, I'm going to be in New Brunswick from Tuesday-Friday, doing assorted events at several of my favourite nurseries. I'll be at Scotts Nursery in Fredericton on Tuesday; Kingsbrae Garden on Thursday, and Corn Hill Nursery near Petitcodiac on Friday. I'll have more to say about these this coming weekend.

So, now what's all this about when yellow isn't? Well, we all know what yellow looks like, right? It's not a colour that's easily mistaken for another colour. That soft yellow rose in the top photo is definitely yellow, whereas you might find it more challenging to describe the Rudbeckia in the photo above. (It's called 'Cherry Brandy', by the way, but that doesn't help you to determine the shade it is.) 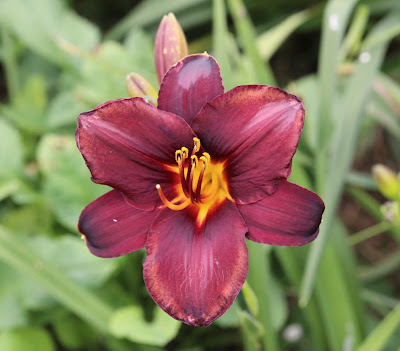 Sometimes flowers are named with a description. This hemerocallis (daylily) is called 'Sweet Hot Chocolate', and despite the challenge in photographing some daylily colours, I think it's pretty well named. It doesn't smell of chocolate the way chocolate cosmos does, but oh well. 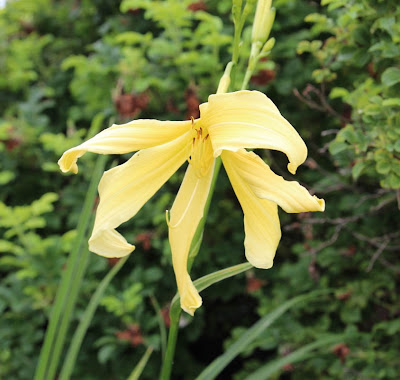 This spider daylily is as yet unnamed, and is described as being green. Even with the wonky colour of one of my monitors, I don't see anything green about it. However, this is also its first year to bloom so who knows what it will look like in a year or two. 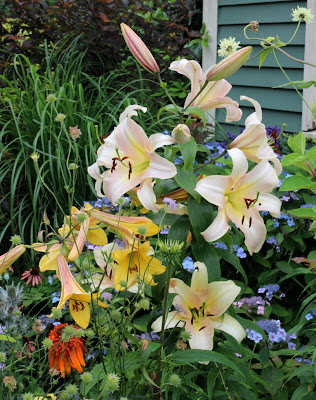 There are several varieties of true lilies in this photo, including 'Golden Splendour' trumpet lily, one of my favourites, and 'Tom Pouce' oriental, which is sort of yellow and has a yellow throat. Pretty much as advertised. 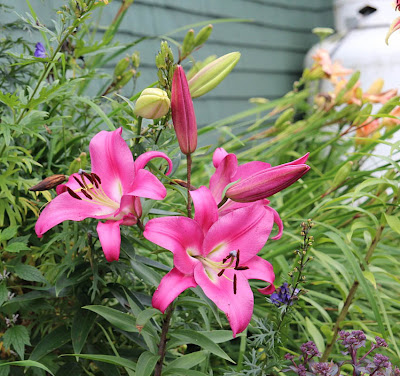 Now, I have no idea who this fragrant, splendid oriental lily is, but I can assure you it is NOT Yelloween, which is what I bought it to be. Neither are any of the other bulbs that I planted as Yelloween. Now that's not the end of the world, because I never met a fragrant lily I didn't love, but still...I believe sometimes I'm cursed when it comes to yellow. 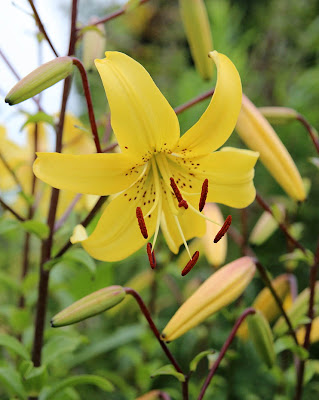 This is a yellow tiger lily that was here when we moved here. It has multiplied over the years and is a very pretty yellow shade. Again, it's pretty hard to mistake yellow for any other colour.

Now, if you've been a reader of Bloomingwriter for a couple of years or so, you know there are certain things that thwart me. One of them of course is goutweed, which we should just all say no to. The other is my inability to get yellow hollyhocks in my garden. The only way so far I've succeeded is to plant a metal sculpture of one. Even that isn't quite yellow.

People take pity on me, send me seeds, give me plants. Last year, my friend Lee Dickie at Briar Patch Nursery in Berwick took pity on me and gave me two plants, one supposed to be yellow, the other red. She had them labeled, and I planted them carefully, marked where I planted them, and waited for this year to arrive. I anticipated finally, FINALLY having a yellow flowered hollyhock in the garden.

This spring, one of them had succumbed to the weather. The label said it was the red one. I was okay with that. The other was healthy and vigourous. I started to hope. Until today, when I went out and discovered THIS... 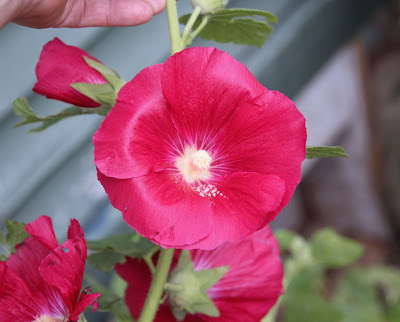 This is not yellow.

I know when I'm defeated. I'd better not see ONE yellow hollyhock on my travels over the next two weeks. Not one. :-)