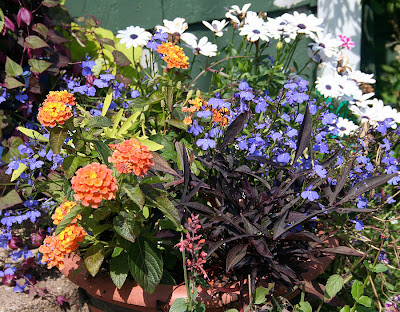 A few days of warm weather has made many things leap ahead in our gardens, and in my greenhouse. I spent part of Friday up my containers, most of which are filled with a variety of annual flowering and foliage plants. I use containers as portable gardens once the risk of frost is past, moving them around the yard to where I want a burst of colour. My Halifax Herald column today is about container plantings, and I didn't have a lot of room to provide a lot of plant examples, so I've added some here for people to try. 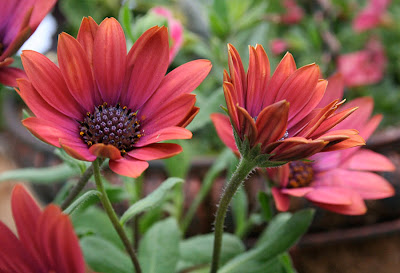 One of my most beloved annuals for containers is the African daisies, of which there are a number of different genera. The Osteospermums or osteos are among the most common, and are vigourous, longflowering container stars. The top photo includes a white variety, while this one is called 'Summertime Blueberry.' 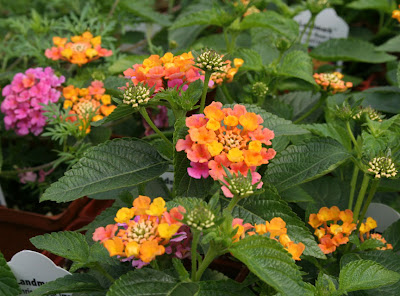 Another favourite for containers is Lantana, which is a plant with a very unpleasant scent to its foliage and flowers, but which has fantastic flowers that usually change colour. This form is called 'Sunrise Rose'. All lantanas are excellent pollinator attractors, but shouldn't be planted outdoors til the risk of cold weather/frost is well past. 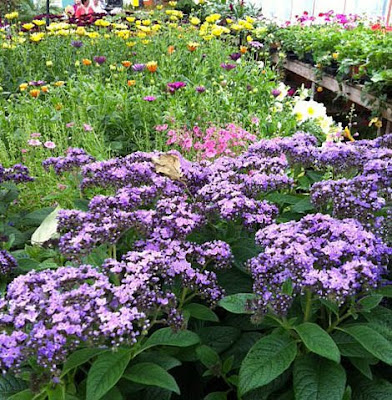 If you want something that smells exquisite, then you need to plant Heliotrope, sometimes called Cherry Pie. Depending on your sense of smell, its fragrance is reminiscent of cherry pie, baby powder, cotton candy, almonds, cream soda, root beer, or vanilla! It also is beloved of pollinators, and is a bit sensitive to cold or to drying out. I was pleased to see many people lugging heliotrope AND lantana out of Den Haan's when I was there yesterday. 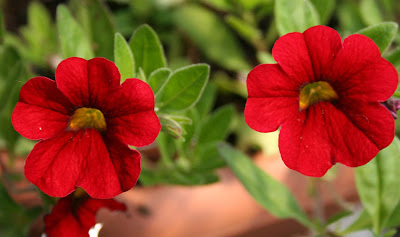 Though it's well known I'm not a big fan of petunias, I DO love their relatives, the callibrachoas, or superbells. These have petite flowers and a vigourous flowering habit. This photo of a new one called 'Vampire' doesn't do it justice--it's a deep, really blood-red shade, very eyecatching. 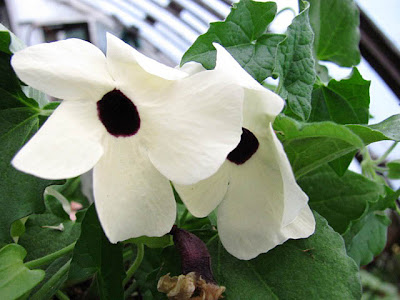 I like to use trailing or climbing annuals in some of my containers, including brown-eyed Susan vine, thunbergia. The pure white form looks nice with those red callies, my Canada day planting! 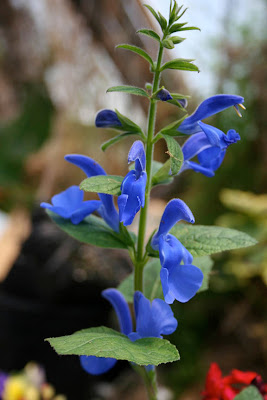 This is one of the tender sages, 'Oceana Blue' Salvia patens. Not hardy here, but so beautiful a blue, and worth taking cuttings of to overwinter if you're as excited by blue as I am. My first visit this year to Ocean View Garden Centre in Chester was earlier this week, and I quickly scooped up several of these beauties. Nursery owners and gardeners alike cuss at the common weed form of Oxalis, but plant breeders have come up with some great varieties. Most are wine or purple-foliaged with white or yellow flowers, but this form with the lime-gold and pink tinged foliage is called 'Sunset Velvet' and is a real eyecatcher. 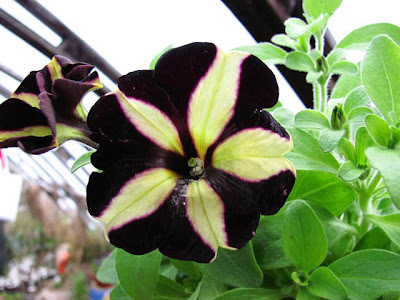 I planted that oxalis with the first of several petunias I really like this year: 'Phantom', which is black with a yellow starry pattern. There's also an all black form called 'Black Velvet' which is pretty choice. I found these first at Den Haan's in Middleton, where I had a fabulous day yesterday signing books and buying more plants. 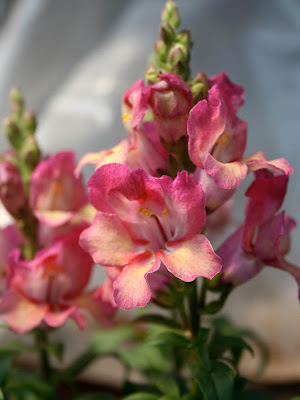 I don't know the name of this snapdragon, but I grabbed several pots of it at Briar Patch Farm in Berwick yesterday on my way home from Middleton, because it will go beautifully with a new agastache I have called 'Acapulco Pink and Yellow'. Snapdragons are a favourite of bees, and they bloom like crazy until a hard frost. 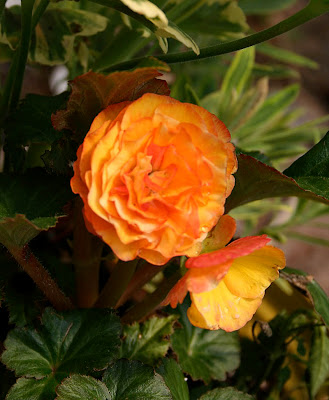 I became a fan of the Nonstop begonia series last year, and have 'Fire' (this one) in a container with 'Tricolour' geranium and 'Ascot Rainbow' euphorbia, both of which have gorgeous red, green and yellow foliage that will play well off these flowers. 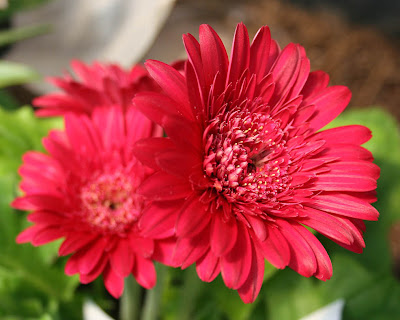 I love daisies of all kinds, and while I bought this gerbera to put into a container, it's probably going to stay in my office the brighten my days for a week or so yet. 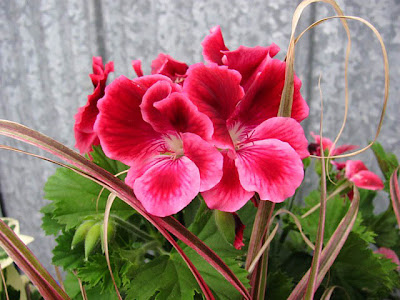 Despite the fact that some people find geraniums boring, I LOVE them all--every possible colour, form, variety. Among my favourites are the regal, or pansy, geraniums, like this one, whcih is called 'Royal Salmon'. I have it planted with 'Fireworks' variegated fountain grass, an annual that works brilliantly in containers. 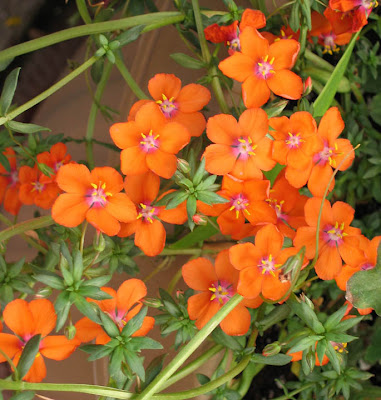 Normally I show photos of the blue, standard form of Anagallis, 'Skylover' or 'Wildcat Blue', but I really like the orange forms as well because they are so bright and cheery. This is 'Wildcat Orange', but there is also a 'Mandarin' and a pink form available. 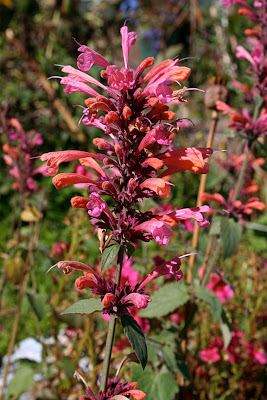 Hummingbird mint is a tender form of Agastache, and a favourite because of its lemony-mint scent and brilliant flowers, which do attract hummingbirds as well as bees. This is one of the Acapulco series, 'Salmon and Pink', and as mentioned above I have 'Yellow and Pink' as well, but it's not yet in good bloom. 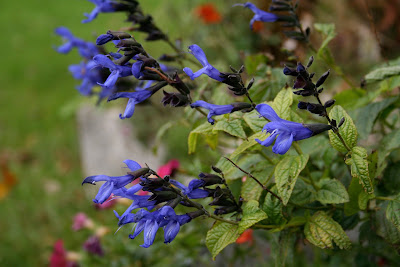 Another of the tender sages to look for--and do NOT buy it as a perennial, as I found it being sold at a certain chain operation in Halifax, Bedford, and Stewiacke--is Salvia 'Black and Blue'. This photo was taken last year in October, before we'd had a frost, and you can see how enthusiastically it was still blooming. 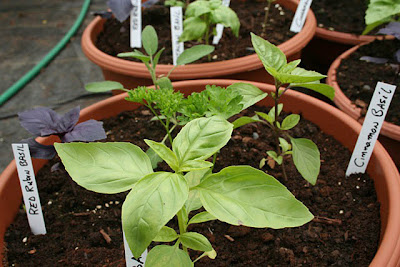 Of course, you can plant herbs, many types of vegetables, strawberries, and perennials in containers as well, but they're mostly a subject for another day. I love herbs in containers because you have an instant kitchen aid sitting on your porch or deck, perfect for running out to snip some parsley or basil for supper.

I hope these suggestions give you some more ideas. Get out to your local independent nurseries and see what sort of treasures they have to offer, and have fun letting your imaginations run wild.