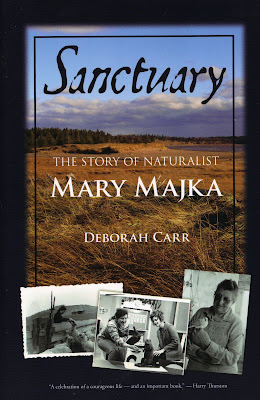 After immigrating to Canada and spending ten years in Ontario, Mary, Mike and their two young sons moved to New Brunswick in 1961, taking up residence in a cottage on Caledonia Mountain, not far from Hopewell Cape and the mighty Bay of Fundy. Surrounded by and inspired by the landscape and wildlife of the mountain, Mary became passionately dedicated to educating others about the value of nature and of local history. Over the years she has been a champion of preserving local habitat for shorebirds and other types of wildlife, helping to establish naturalist societies and nature interpretation centres.

So full and diverse has Majka’s live been that it isn’t an exaggeration to say she has lived several lives, including that of wife and mother. But it is her work as a naturalist, teacher, and adamant voice for preserving of natural habitat such as Mary’s Point Shorebird Reserve (named for an aboriginal woman of the same name, not for Majka) for which she is most widely known and given accolades. A member of the Order of Canada and the Order of New Brunswick, among others, Majka found her strengths and her passion for preserving natural and historical sites in middle age, when many would have been content to rest upon their laurels and slow their pace.

In this respect, Carr feels especially connected to Majka, as she embarked upon her career as a writer in her middle years. She acknowledges that Sanctuary wasn’t the easiest book to write; she had only been working fulltime as a freelancer for several years when the compulsion to write Mary’s story became too strong to ignore.

“Having only written for newspapers and magazines, I had no idea how to tackle such a large project as a biography,” she admits. The interview process was draining for both women, as it “demanded much from us, emotionally, so we had to tackle it in small chunks of time.” It was also difficult to corroborate so much of Mary’s early life where she had been separated from her family—plus there was the challenge of telling the rich story of a life fully lived. At times there may be a surfeit of details of people from Mary’s past and present, but the story doesn’t falters its pace or energy.

Over the course of several years, the pair continued the process, sometimes setting the work aside for months at a time while Carr addressed the demands of earning a living. During a carefully planned sabbatical from other work in 2008 she completed the book’s draft although at times she says she felt so immersed in Mary’s story that it felt like she was losing herself. The two have danced a complicated dance as interviewer and subject, student and mentor, and it’s been a highlight of the book tour that Mary has been able to attend some of the readings and signing events along with her biographer.

If there’s a single word to describe Majka, it would be indomitable. Despite privations, language barriers, bureaucracy and other hurdles that would have defeated lesser mortals, Majka with her husband forged a new life in Canada, and went on to work tirelessly to create sanctuary for wildlife, for habitats, and more. Although passionate about nature, she has also been a tireless advocate for the preservation and restoration of structures of historic worth, from a 19th century bank building to some of New Brunswick’s aging and unique covered bridges. In that way, as she created sanctuary for nature and human made articacts, she also found something of a sanctuary for her own life.

During the interview process, Deborah told Mary that she believed her life’s story would be a moving inspiration to others. Mary dismissed that idea, feeling that her story wouldn’t change anyone’s attitudes, but Carr strongly disagreed, then and now. “I’ve already seen evidence that Mary’s story is changing how people see themselves and their role in the world,” she says. “I hope that it encourages people to give space in their life for passionate response to something. The universal lesson of (Mary’s) life isn’t necessary about nature or the environment, but it’s a call to live passionately and authentically, no matter where the passion lies.”

I loved this book, and not just because I have known Deborah for a number of years and consider her a friend as well as a colleague. We call each other 'neighbours across the bay', since we share that mighty Bay of Fundy, and have a passion for the natural world around us as well as for the written word. I loved it because I was enthralled at the passion and determination of a single person who absolutely was determined--and is still determined--to make a difference in this world. Would that we were all a little more like the altruistic and dedicated Mary Majka--and as determined to illuminate the stories of such people as Deborah Carr is.

Almost forgot!! I plan to give away a copy to a commenter on this post, who answers this question: what naturalist inspires you to be a better steward of your garden, your community, your world? I'll make a draw next week, and will also announce the winner of the previous draw at that time!