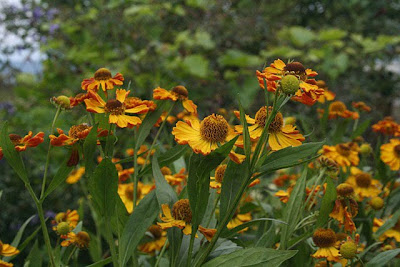 As Saturday afternoon gave way to evening, I paraphrased an old expression from the 1970s "What if they gave a hurricane and nobody came?" Earl was pretty much a non-event for us; some wind, some rain, happily no damage to crops or properties around here. A few trees uprooted or broken in other areas, some power outages, but really, it could have been much worse. Thank you all for your good wishes and caring; I hope everyone got off as unscathed as we did.
Ironically, we had more wind on Sunday and Monday, of a more damaging kind because it came out of the west southwest, than during Earl's visit. I was pretty cranky when I walked around the garden on Monday and saw some of the perennials had been beaten around by the wind, by banging into other plants, but I soon got over it when I noticed some of the marvels that were happening. 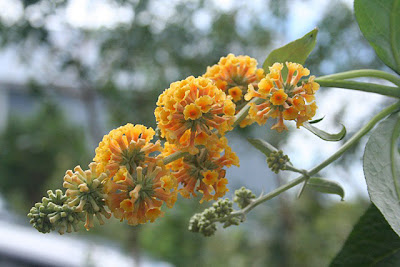 Starting with the blooming of 'Sungold' buddleia, one of the most beautiful of flowering shrubs. Here in Nova Scotia, buddleias are not only NOT invasive, they are often marginally hardy. They will die down to the ground and come back fresh for some, but I tend to treat them as annuals, buying small plants each spring and tucking them into spots where they will hopefully be happy. Obviously, this one has been happy. 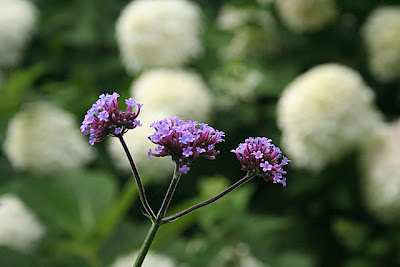 While I don't have drifts and drifts of Verbena bonariensis, I have half a dozen good plants from transplants this year, and I'm optimistic that we might get seedlings. If not, I'm sure a visit to my friend Terri next spring will yield some new seedlings. This is such a great plant, beloved of butterflies and other pollinators as well as by the gardener. 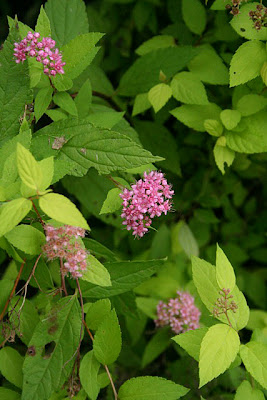 'Lemon Princess' spirea has decided to throw up a number of new blossoms along with some freshly gold foliage. I normally don't even pay much attention to the flowers on most of my spireas, as I chose them for their foliage colours rather than their blooms. 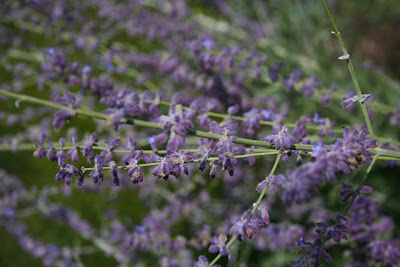 After years of battling with Russian sage, I decided to simply treat it as an annual, and buy it every year. I've placed it in the best-drained garden, where the echinaceas live, and if it survives the winter and comes back next year, great. If not, I still like it and will plant it again next season. 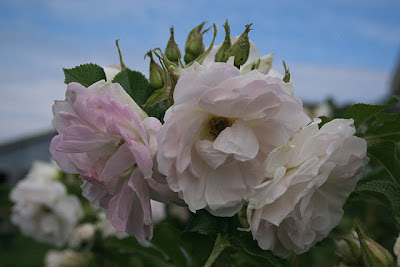 One of my favourite roses is the rugosa hybrid 'Polareis', which I bought at Cornhill Nursery about seven years ago and which is a spectacularly floriferous and well behaved shrub. It does get some aphids on its buds, but I just spray a blast of water from the hose on them or let their predators feast on them. 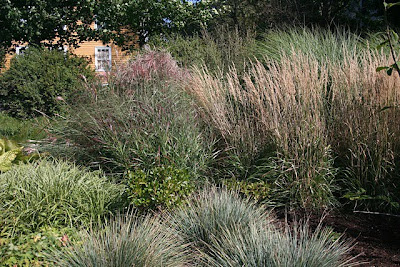 This is the season when perennial grasses are really coming into their own. Some of them have finished flowering, but others, such as the miscanthuses, panicums, molinias and schizachyriums are just coming on. 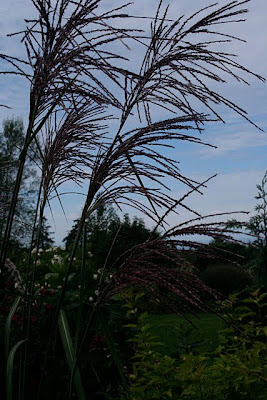 I have half a dozen or more miscanthus varieties around the property, not all of them clearly identified. Since this one came from Baldwin's Nurseries and is the earliest to flower, I'm fairly sure that it's 'Malepartus'. It was unperturbed by the wind, whoever it is. 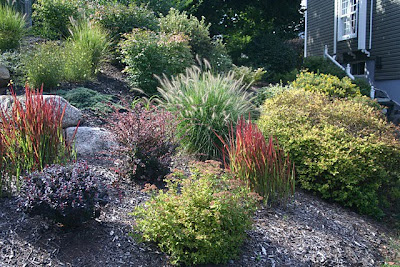 While I am kicking and screaming about going into rapidly shorter days, I do like the light of September, especially when it plays on foliage such as in this garden. This is a garden in Wolfville that I discovered today; along with numerous low growing shrubs such as barberries, there are Japanese blood grasses (Imperata) and fountain grasses (Pennisetum) catching the light. 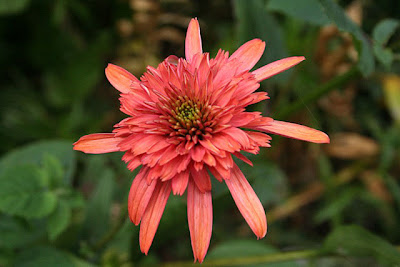 Although some of the echinaceas were battered and petal-bruised by the weekend weather, 'Secret Passion' decided to comfort me by producing several new blooms. It's not quite as awesome as 'Hot Papaya', but it's pretty close. 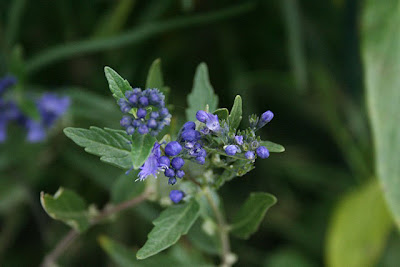 To go along with my lovely yellow buddleia, here's another late-blooming shrub: Caryopteris, or blue mist shrub, sometimes also called blue spirea. This is a small plant, bought this summer from a nursery that had brought it in thinking it was somehow a perennial (I think the nursery they ordered from screwed up their order). I love caryopteris, though it can be really slow to bloom here; its cooling blue flowers work beautifully among the hotter colours of many of September's blooms.