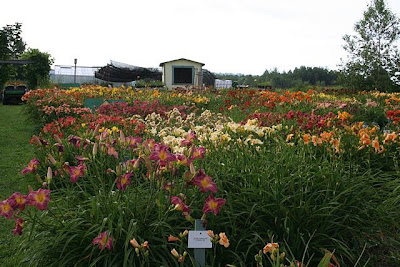 As I mentioned in my previous note, daylilies are a plant propagator's delight, which is why there are more than 60,000 named varieties out there. There are some very famous breeders, including the late Steve Moldovan, whose partner carries on his work; Frank Smith, whose plants are simply awesome in the extreme; James Marsh, who created the 'Chicago' named series of hybrids (and others) such as Chicago Sunrise and Chicago Scintillation; Pauline Henry, who was responsible for the 'Siloam' series, including Siloam Frisbee and Siloam Plum Tree; and many, many others. 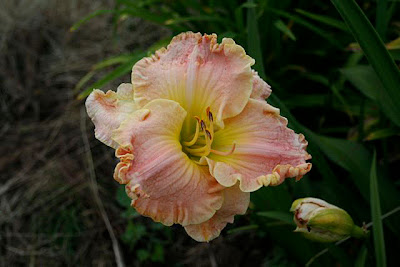 I stopped by Canning Daylily Gardens last night on my way home from somewhere else, because I liked the light and because Wayne and Wayne were still at the field. I wandered around with my camera, snapping photos of some of the cultivars I just gotta have one of these days, although some of them are a bit expensive for me yet. This beauty above is called 'Smile Again', and is one of Frank Smith's new releases from 2006. 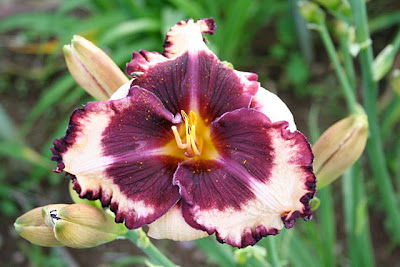 The Waynes bought a whole series of Frank Smith daylilies new releases in 2006 and I've been slobbering over them ever since, watching them as they (slowly!) multiply. This is the strikingly gorgeous 'Voodoo Magic' which is not yet for sale in Canning. But gazing on it is free... 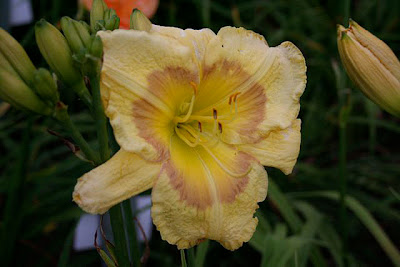 I actually have this one but didn't have a good photo of it for my previous post: this is called 'Russian Easter' and is a David Kirchhoff release. (There's also a daylily, hybridized by Henry, called 'Siloam David Kirchhoff', and I THINK I have it somewhere in my garden....) 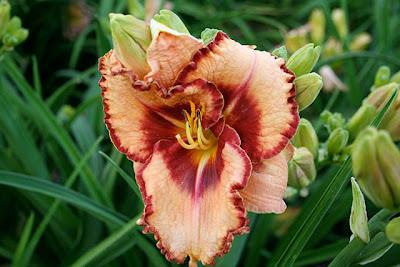 Sometimes I just adore daylilies for their names, which can be hilarious, touching, or just plain whimsical. This one is called 'Lies and Lipstick'. 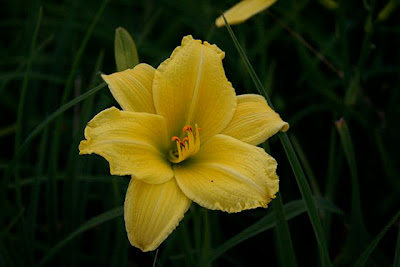 And this is Green Flutter, which I know I have somewhere in the garden too. Big Wayne told me to bring down flowers of the ones suffering from Lost Label syndrome, and he'd identify them. 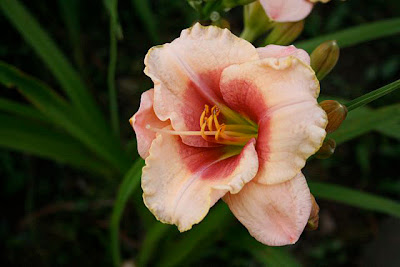 Of course, if you have lies n lipstick, it's inevitable, perhaps, that there'd be a daylily called 'Beloved Deceiver'. 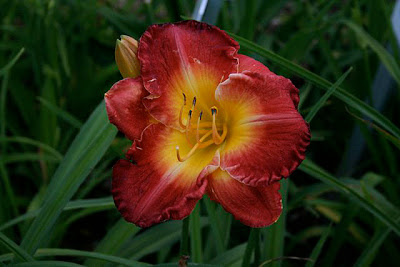 And if you're very, very good, perhaps you'll become 'Forever Redeemed'. (I did roll my eyes at some of the names, but this is such a gorgeous daylily I had to include it. ) 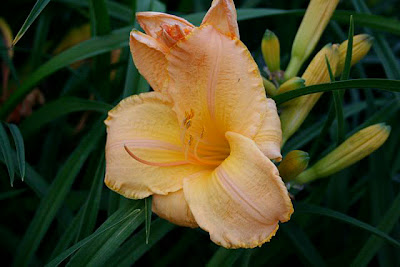 This is another of those "I'm pretty sure I have this one, but I'll wait til they all flower or else I'll buy this and find it already in the garden". 'It's called Etched in Gold.' 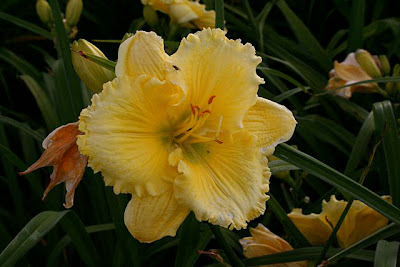 Since it was late in the day when I took my photos, some of the blooms were just starting to lose their splendor, while others had faded to mush, and still others were yet to open. I like the softly yellow ones, such as this, which is called Dianne Lee Longson. 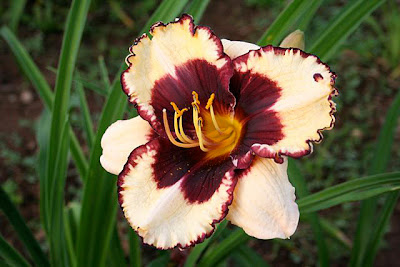 This is my most must-have daylily. My father's name was Ivan, so it goes without saying that I'd need this Frank Smith introduction, which is called 'Crazy Ivan'. But it's still very expensive, and I can get a dozen other daylilies for the cost of one fan of this. I'm patient. I'll wait. 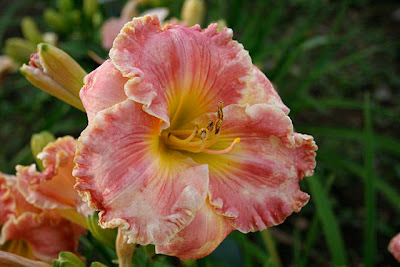 This is called 'Circle of Fire', and I'm not sure why, but it's 'right some beautiful', as the saying goes. I like the cultivars with frilled or ruffled edges, especially in contrasting colours. 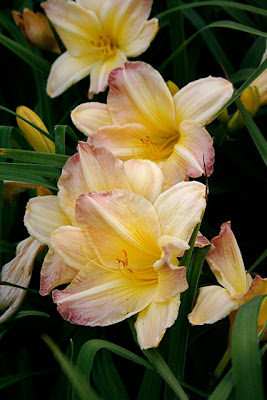 I've been admiring 'Artiste's Favourite' for a few years and I don't think I've bought it yet. Of course, it's possible that I'll go to get it and find it's sold out. The Waynes do a huge business and now with so many varieties in bloom, people come in to look at the display beds and snap up plants as fast as they can. So I'd best check it out today! 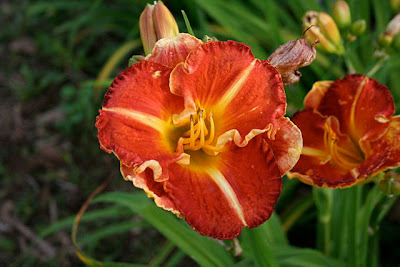 Rounding out today's rainbow of "I want that!" daylilies is the very striking 'Art Imperial.' I stress that's today's group of those I want. It's raining so I won't go to the garden today, but I know full well that when I do, I'll come home with another batch of photos of my must have daylilies. Hopefully this is enticing you even more, too.