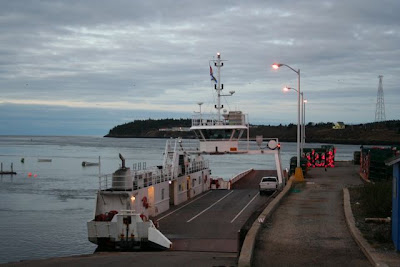 So I've been amongst the missing again, but with good reason. With surgery day approaching in December, I've been madly working on articles and other projects (you know, the kind of writing that pays the bills) and haven't had much free time for anything else. I DID get all my bulbs planted except for 20 alliums and 12 pink narcissus, and if the rain and fog stops this weekend I'll get those in. So that's about a month and a half earlier than last year. But last year we had snow on Remembrance Day (Nov 11) and then the ground froze hard and stayed that way until Christmas Eve. So definitely a better autumn this year. 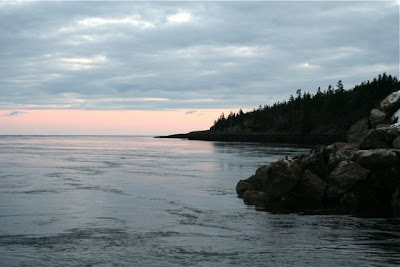 So what do these photos have to do anything? Well, one of my projects this year is through Writers in the Schools, administered by the Writers Federation of Nova Scotia, or Ma Fed as we call her. So I get to go around to a number of schools and give workshops on writing to kids of all ages. Though I have to say, sometimes I'm not sure who learns more, the students or me. They're awesome. Anyway, this week I was at a school in the city, and then for a total juxtaposition, at two rural schools on the Digby Neck islands. You travel on a 3-5 minute ferry ride to each island. First stop is Long Island, which you reach by ferry Petit Princess, seen here on the mainland side preparing to load. Yes, at a rather ungodly hour, at least for this night owl. And did I mention it was a 2 1/2 hour drive to get THIS far? Thank heavens for Tim Hortons coffee and a good stereo system in my car. 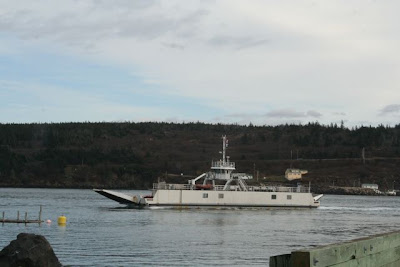 But I had to take two ferries first off, because my first port of call was at Westport School on Brier Island. This was the coolest school, because it holds exactly 16 students in two classes; Primary, 1, and 2 in one class, and grades 3-6 in the other. I hadn't seen a small school like this in many, many years, and I loved it; could have happily stayed there all day. But life on islands can be run by ferry schedules, so once my workshops were done there I was back to the ferry and back to Long Islands to the Consolidated school there. A much larger school with 140 students in grades from Primary to 12. I had a great time at both schools, and apparently, (most of) the kids I was with did too. 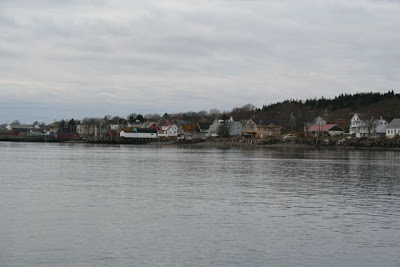 The villages on both islands are based on a fishing and ecotourism economy; during the summer, there are numerous whale watching expeditions, but also hiking, kayaking and other outdoor activities. The fishing is mostly for lobster, but some probably hold scallop and groundfish licenses too. The lobster season starts in less than two weeks, but it's a bit nervewracking this year because prices to fishermen are way, way down, while expenses are up. The stock market quakes in our country and our dear US neighbour have caused havoc in more ways than in mortgages, believe me. (But hey, at least our American friends have an awesome new president-elect, while we got stuck with that loser Harper again after our election. Maybe the Yes-We-Can optimism of the US will flood our way...congratulations, you guys!) 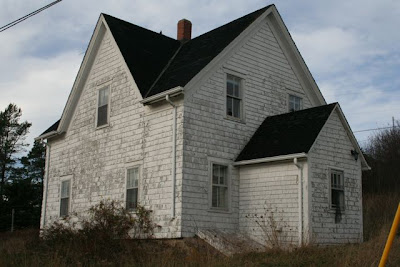 Once I was done at the schools, I worked my way more slowly up Digby Neck, back on the mainland, to do some research for upcoming assignments. I was concerned to see a number of homes for sale both on the Islands and back on the mainland...and some that are not for sale but are simply abandoned to the elements. Sad, troubling and downright scary. 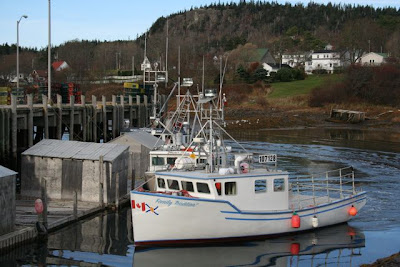 In Sandy Cove, there's an air of anxiety at the wharf, as the fishermen prepare for season's opening, rather than the usual anticipatory excitement that usually surrounds Dumping Day. The only truly happy individual I saw on this wharf was a small beagle-like dog, who came racing across from the baithouses to follow this boat's progress as it came in around the wharf. Maybe the dog's owner was running the boat, or maybe the dog was just a happy mascot for the harbour. 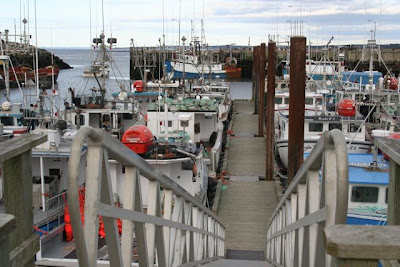 As you can see, fishing is a huge part of the southwest part of the province. This is a view of just one part of the big harbour at Meteghan, one of the Acadian communities in the municipality of Clare. A big boatbuilding industry is located in this stunningly beautiful community, as well as the fishing fleet. Come the last Monday of November, there will scarcely be a vessel to be seen, at least until the traps are all set. 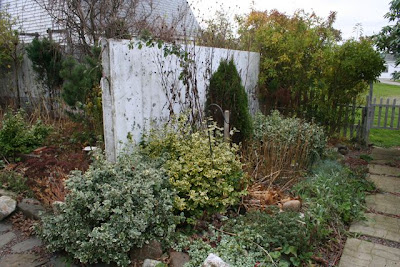 My destination was my friend Flora's home, as illness has kept me from visiting since late spring. Now we're into late autumn, but Flora's garden is always a plethora of joyous colour, even after the gales of November have scoured the leaves from trees and turned most perennials to mush. 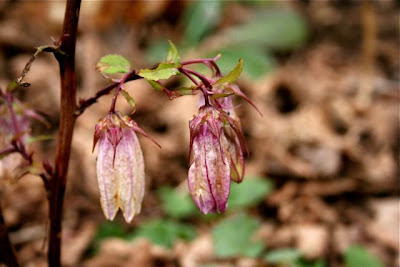 I say "MOST" perennials, because there were still some interesting flowers to see, including this defiantly budding and flowering campanula. 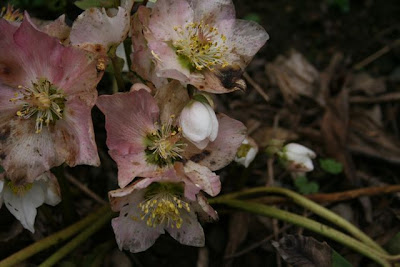 And this Christmas rose decided to come early, maybe aping the merchants and advertisers who want to shove Christmas down our throats as soon as Halloween is (barely) past us. 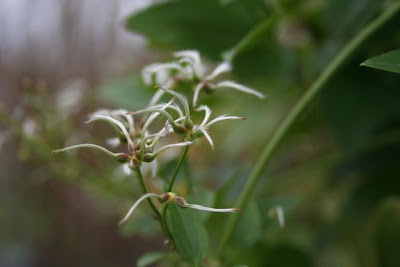 One of my favourite clematis (and my friend's too) is Sweet Autumn, here down to its seedheads but still gracefully pretty. 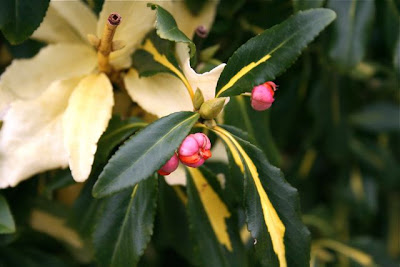 And the gay foliage of euonymus is always a delight to the eye, but never moreso when there are berries to add an extra element of colour to the shrubs. 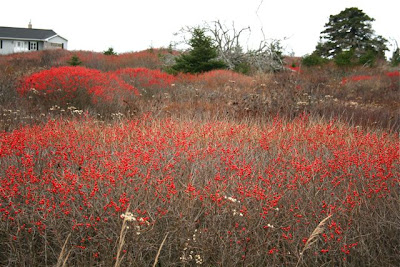 Now, if you want colour...this is a banner, BANNER year for winterberry or Canada Holly (Ilex verticillata). I know I've sung odes of adoration to this particular native shrub before, and I will at every opportunity, because it's such an awesome plant. Like other ilex species, it's dioecious, and it was obviously a banner year for pollination because the female plants all along the Neck and the French shore are absolutely burdened with berries. And big ones too, though my friend tells me it was quite dry at times in her community, despite being on the shore. Had I known, I'd have gladly sent down some of our fog and rain! Anyway, the shot above is from the road outside Meteghan; there are quite literally thousands of acres of undeveloped land along the shores, and they are covered in Canada holly, wild roses, alders, grasses, and other plants, and currently are ablaze with the fiery reds and oranges of the winterberries. This is good news for the birds who overwinter; I saw a large flock of robins in one thicket of female winterberries, stuffing themselves on the fruit, which surprised me a bit as they usually go for worms, etc. 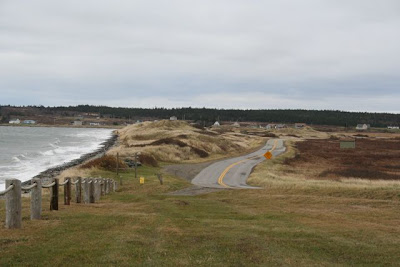 And finally, on my way back home yesterday, I stopped at one of my favourite beaches in the province, at Mavillette. It was chilly and windy yesterday so I didn't walk on the beach or poke around on the dune, merely smelled the salt air and listened to waves and wind in the grasses. And was happy even on a grey November Day.