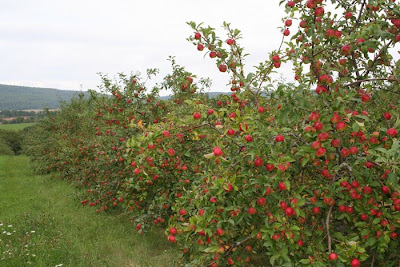 The Annapolis Valley of Nova Scotia where I live is world-renowned for its apples, and rightly so. This is the height of apple season, with much of the crop already in, and apple-lovers like myself happily toting home litres and bushels and pecks and bags of various apple varieties 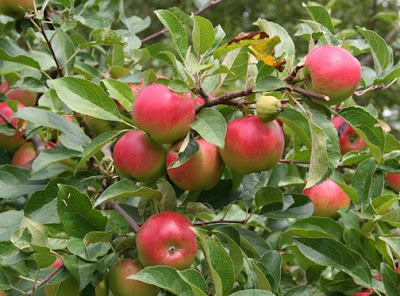 How many apple cultivars can you name? Everyone will mention the McIntosh (in my opinion, the most over hyped apple next to Granny Smith), and probably Red Delicious, Cortland, Northern Spy and Gravenstein. But how about Sunrise, Ginger Gold, Macoun, Ribston, Jona Gold, Jonathan, Royal Gala, Fuji, Cox Orange Pippin, Russet, Spartan, Melba, Paula Red, Spigold, Empire, Braeburn, King, Golden Delicious, Mutsu…there’s a world of taste in these and many more. 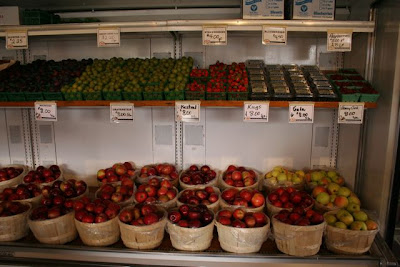 I buy most of my apples at Noggins Corner Farm Market, in nearby Greenwich. This seventh-generation farm grows a wide variety of produce, but to me it's their apples (and pears) that are the star attraction. I only buy small amounts of apples at a time; usually 4 quarts or a half-bushel. The farmer has controlled atmosphere storage and I'd rather pay HIM a little extra for fewer apples and have them always fresh, than bring home a large amount and have them go soft after a couple of weeks. 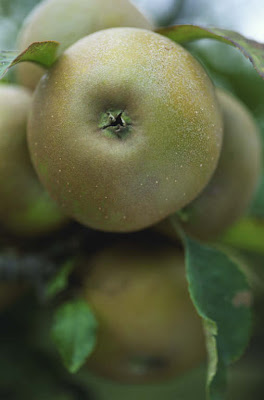 Like everyone, I have my favourite apples, and the Russet is one of them. Although they're starting to harvest them now, I won't eat any for a few weeks yet, as they need some time to mellow and ripen a bit. But they're fantastic when they are ripe, and they're one of the varieties that is in the background/heritage of a number of popular cultivars. 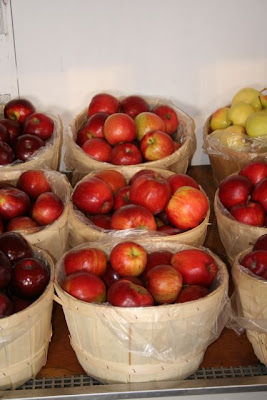 Long ago as a fresh graduate from the Ag College, I spent a couple of months one autumn picking apples for a local farmer. Apple picking can be a lot of fun, on sunny lovely autumn days. Not so much on cold wet rainy windy November days when there are idiot hunters out nearby. This is a King apple, and it was the first variety I picked; they can be huge apples, and while they're usually used for cooking, there's nothing like a fresh apple right off the tree--no matter what variety it is. Even a McIntosh tastes good then. 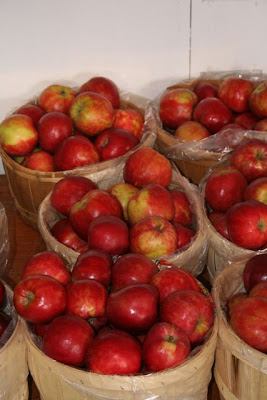 While 'summer apples' don't do it for me other than to give me an early taste of my favourite fruit, I do love Gravensteins. While there are earlier apples, perhaps one of the best-loved in Nova Scotia is the Gravenstein. We feel a warm attachment to this apple because it was introduced to our province by Charles Ramage Prescott, whose home Acacia Grove in Starrs Point, Kings County is a provincial museum. Prescott (1772-1859) brought more than 100 different cultivars of apples to Nova Scotia, but the Gravenstein took hold because it was truly an all-purpose apple, good for fresh eating, cooking, and of course, making cider. There are actually several different types of Gravensteins grown in the Valley—the old-fashioned type grown by Prescott, which is yellow-green in colour, and the red-skinned Crimson Gravenstein shown here, a sport of the original variety but tasting very much the same. Recently, the Nova Scotian Old-fashioned Gravenstein was named to the Slowfood Foundation for Biodiversity Ark of Taste, a catalogue of rare and unique quality foods from around the world. 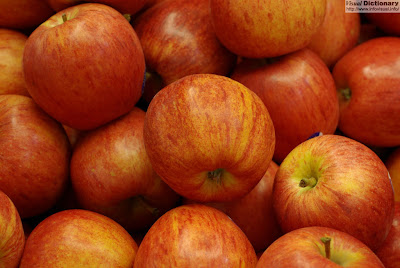 What we like for apples depends very much on personal taste, although various growers have told me that in the past, customers looked more for large red apples than they did for tasty varieties. That seems to be changing with the introduction of apples such as Jona Gold and Honeycrisp and Royal Gala and other varieties that have a green, gold or orange-yellow ‘ground colour’ with perhaps a red or reddish blush over that. 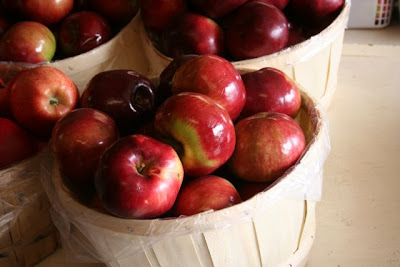 This is a heritage variety named Kestrel, about which I know very little, but it's fairly early and tasty. That's pretty well good enough for me. I like my apples firm, with a real snap when you bite them, and a sweet-tangy flavour. Those that are mealy or bland...go to the horse. 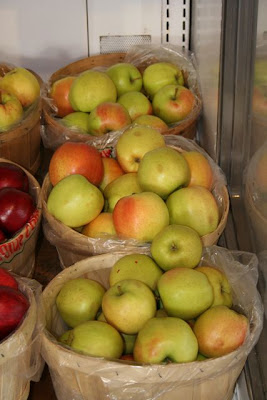 Despite their name, Honeygold aren't related to Honeycrisp, at least not directly; an older apple, circa 1935s and developed to be grown in colder regions as a substitute for Golden Delicious. They're quite good, but we grow awesome Golden Delicious here too, so I tend to opt for the latter more often. 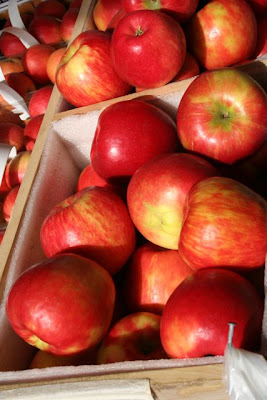 Ah, yes, Honeycrisp. This is the designer diva apple these days, with people going completely gah-gah over them. Myself, I don't buy them, other than one or two in mid-winter when they taste great. But I find there are other apples just as good, if not better, and a lot sooner in the year. What I DO love about Honeycrisp is that producers get top dollar for them. They grow very, very well here in the Valley, but they're a challenge to grow, harvest and handle. Pickers actually clip the stem of the fruit because otherwise the thin skin will get pierced. Isn't that interesting? 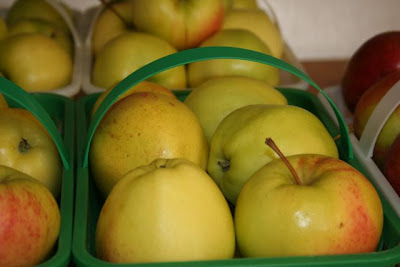 This is Gingergold, another sport of Golden Delicious; they're earlier than GD, and I don't know how well they keep because I don't see them for sale in winter. It may be that there just aren't large enough crops of them to hold for long periods of time. A late farmer who was a friend of mine put me on to these apples about 8 years ago, and while I like them, there are others I prefer. Including.... 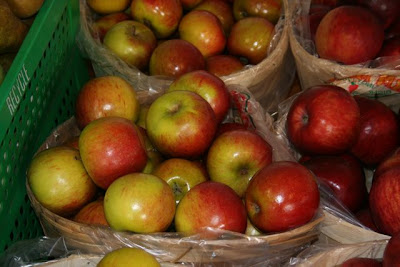 My favourite old fashioned apple, the Cox Orange Pippin. My dearly departed dad also loved this apple, and they do have a distinctive flavour that is sort of orange-like. They also smell simply divine. The Cox Orange is a sport of the Ribston Pippin and has been around since the mid-nineteenth century. They're just now getting to the point where I'm prepared to buy and eat them; a staffperson at my favourite farm market and I were giggling a couple of weeks ago because the Cox Orange were for sale, but when they're green they just aren't that great. I was looking longingly at them and then saying, "NO! Resist! Not yet!" I took home some Gravs and Galas instead. 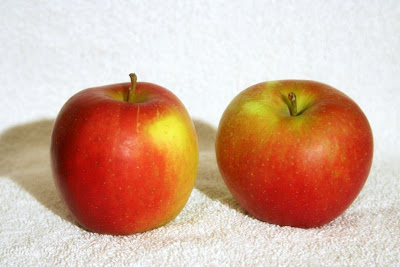 Now I'll put this apple up against Honeycrisp any day of the week. It's Jonagold, and probably the apple next to Cox Orange that I eat the most of. They're awesome; crisp, juicy, sweet-tart, cook well, store excellently even in a fridge, and just delicious. A cross between Jonathan and Golden Delicious, also apples I like a LOT, and it's always fun when I pounce on a basket of Jonagold in the farm market while others are slobbering over Honeycrisp or Macs or Red Delicious. I get puzzled looks, and I tell people to try these apples if they want something excellent. Heeeee!

Notice there's no Red Delicious or McIntosh in this Ode to Apples? With good reason. Red Delicious are pretty, and they're okay straight off the tree, but too often they're sold in gas stations, convenience stores, and elsewhere where they haven't been stored correctly, and you bite into the apple and find a texture and taste like sawdust. Blerk. To my mind, the only good McIntosh is the computer of the same name *and slightly different spelling, of course. The apples are tough-skinned and sour but tasteless except right off the tree. Yet this is still one of the most commonly grown cultivars because people think they love it, probably due to it being ubiquitous in stores and markets. Now, the Mac IS important in the heritage of some apples I like much better, as you'll see. 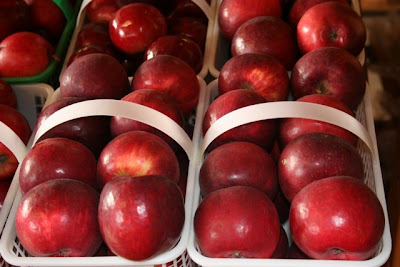 This is one of my all-around favourite apples for cooking and eating, the Cortland. And IT'S a Mcintosh hybrid, nearly a century old now, but without the tough skin and with a far superior taste.
Speaking of taste: One of my pet peeves is going into grocery stores and seeing displays of apples in a rainbow of colours—and finding them all a product of somewhere else, be it Washington, Ontario, New Zealand or South Africa. These might LOOK great, but their taste leaves much to be desired, both because they’ve been trucked halfway across the world (in some cases) and are stored and displayed improperly in the stores. After all, the Annapolis Valley is the apple growing capital of the province and the region, so these imported apples are an insult to growers and customers alike. And I'm sure that many of you, living in your own apple-producing regions, come up against the same situations in your grocery stores.

This is where customers need to complain vigourously to produce managers (and head offices, if need be) to demand local fruit. Don’t accept the excuse that local fruit isn’t in season, either, because today’s storage practices ensure that local apples are always in season, at least in terms of quality and taste.

And with that...I must go eat an apple. WHAT!? There's only one left? Time to head to the farm market, obviously. I'll see you all later. 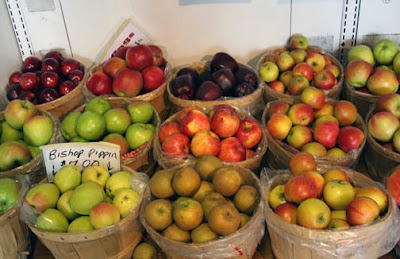