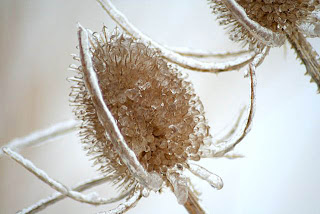 Well, Her Cold Majesty the Ice Queen decided it wasn't Within Temptation to leave us alone, and she has paid us one heck of a visit. The temperature has hovered around freezing all day today, so that most of her handiwork has yet to disappear. And that's not necessarily a good thing. I always enjoy a bit of ice on plants, for a few hours or so, but it's now been more than 30 hours since the ice first started to form. 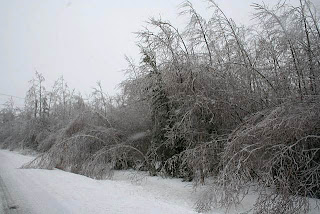 In the Valley, it's all melted. I wish I had taken my camera with me today when we went to the Valley, because you could see about halfway up the side of the mountain where the ice started on the trees. I did go up the road a ways this morning to have a look at the trees, and it's quite evident that there are going to be some very damaged trees come spring. Some of these have already broken off.

In our garden, the evergreens just shrugged their limbs, drooped down as they were with a mantle of ice, but are mostly unphased. The big spruces, especially, have seen far worse. In 1995, we had an ice storm that left the Valley encased in crystal for several days. And then there was the great ice storm of ten years ago, early January of 1998. THAT did a lot of damage, of course, and not just to trees. So it's all relative, isn't it? 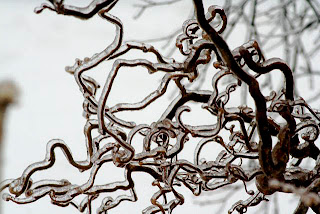 My Harry Lauder walking stick (Corylus avellana 'Contorta') seems quite unphased by the ice, probably because his limbs are already twisty and flexible. 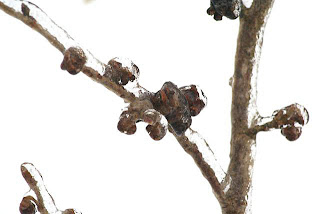 It wasn't until I was examining this photo of my 'Diane' hamamelis that I realized inside the ice you can see the starting of flower petals! EEEEPS! She's trying to flower and she's covered in ice?? It's her first winter in the garden, and now I want to go out with an electric blanket and warm her up. Okay, just kidding. But I want the ice OFF her! 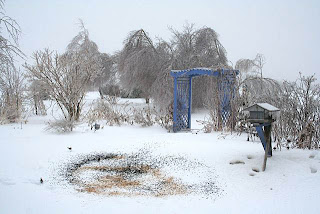 Do you ever find that no matter HOW MANY photos you take, there's never the exact one you want? I've poked through hundreds of photos looking for a similar view of this part of the yard in summer. I know some of you will recognize the arbour, of course... 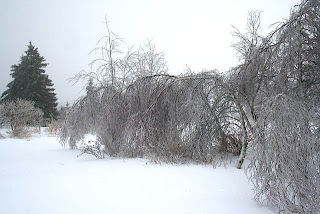 These are the birch trees behind the arbour. They're normally between 20-25 feet high, some maybe a little more. Not right now. Several are broken in the tops, necessitating some surgery or outright removal come spring. All of them are bowed down under the huge weight of ice. 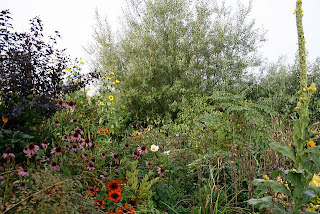 And again, this isn't quite the angle I wanted, but you can see one of the young willows in the centre background. We planted these as little more than branches picked up from a broken willow, about seven years ago, and they're all about 15-20 feet tall now. 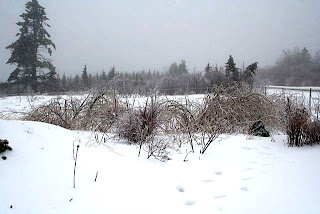 Well, they WERE...being willows, they may well spring back, but one is laying down in the horse's paddock, right over the fence (also flat). The other shrubs in the area are fine, the barberries and roses and Acer ginnala and Physocarpus opulifolius, etc are all fine, but the top is broken from a birch nearby too. 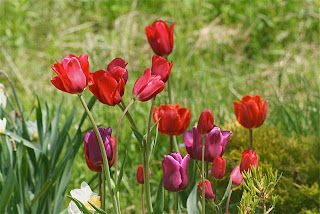 Well, let's look on the bright side of things. No one is hurt, there are no flooded roads like in some parts of our region, and as I said the Valley has mostly thawed; we will tomorrow, when the temperature is supposed to go up to 8 C. The power didn't go out, the Internet came back on last night after we got home, and January is nearly over. Which brings us one step closer to spring. And tulips. And other pleasures.

It'll all be okay.