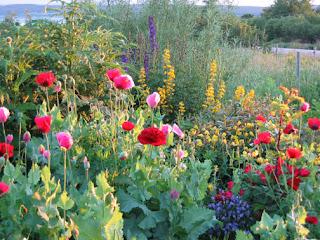 Before I start rambling about plants, a little commentary on the weather this week. On Tuesday afternoon, I sat out on the back deck soaking sunlight up like a plant coming out of dormancy—it was mild, mild mild, although the next day it was milder yet—62 degrees F in midafternoon. By that point, the drifts of snow had all but melted, which led me to remark that watching ice melt can actually be quite exciting…when it’s melting at as prodigious a rate as it was. We had a bit of a stream running through the yard and into the rockwall basement of our century old farmhouse, but no harm was done—that’s why we have a real good sumppump. When we win that lottery I’m always gonna win, there will be some drainage solutions around here, believe me!

Today, however, we’re back in the fro-zone… the rhododendrons look like they’ve been doing aerobics the past few days. Leaves up…leaves down…leaves open…leaves furled again. And while others have reported snowdrops in bloom, it’ll likely be a couple more weeks before we see the dear little things trying to pop up around here. Although on Wednesday, we saw a bat—yup, a little brown bat—fluttering around the yard for a bit, before he went back into the bathouse where we assume he’s been spending the winter. Since rabies isn’t an issue here, I wasn’t worried that he was a mad bat—just an early riser. I’d seen a (sadly) dead skunk on the road earlier that day, so a lot of the sleepers were awakened by the mild spell.

There has been discussion on various garden blogs lately about new plants, as well as old favourites. Some want to try all the latest, to see if they’re also the greatest. Others are content to stay with their tried and true faithful plants.
I fall right into the middle on this discussion. My theory is, of course, to bloom where you’re planted, and plant what brings you joy. Orange-red geraniums aren’t my thing—I prefer hot pink. Impatiens make me impatient, at least in my own yard, but I’ll happily enjoy them in yours. I’m not crazy about penstemons, I never plant a begonia, and of course everyone knows how I feel about goutweed. JUST SAY NO!

Like many gardeners, I have some old trusted and true plants that I wouldn’t give up for any reason, things that have been in my garden for ages and that aren’t going anywhere. 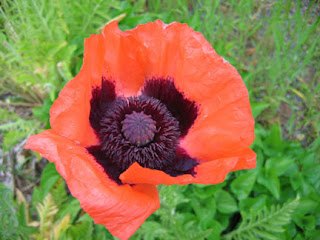 Orange oriental poppies, for example, make my heart exceedingly happy. Well, okay, I admit I never met a poppy I didn’t love, of course, but those big crepe paper orange ones just shout summer joy to me.

There are a few unnamed daylilies in the back garden that may not be as fancy or unusual in colour as newer ones, but they just flower their little heads off with little attention from the sometimes overworked gardener.

The writer and curious, compulsive gardener in me also needs to be able to try out some of the new plants so I can tell other people about them, but also some of the newer plants just make me glad to be a gardener. Black Negligee cimicifuga, for example (now classified as Actaea by those taxonomists who love to tease us), is a beautiful plant, and one that has never given me even a moment’s trouble since I first planted it three seasons ago. There may come along ‘blacker’ variations any day now, but I’ll stick with this one, thanks. This year, I intend to try some of the fancier new daylilies that Wayne and Wayne will have available at Canning Daylily Gardens especially any that are fragrant. It may be a couple more years til their Frank Smith collection of cultivars is really to sell, but I’m patient…and there are plenty of others to choose from.

And while I haven’t started making this year’s list of things that I really, really want to get my hands on—other than that blue-flowered hellebore—one of the greatest pleasures I know of is arriving at a garden centre and finding a plant, be it genus, species or cultivar, that I either didn’t know about (and there are a gazillion of those) or hadn’t thought about (ditto.) Of course, that’s why my grocery budget seems to dwindle some weeks, while the ‘garden groceries’ seem to take up much more room in the back of the car.

If you browse a variety of nursery websites, you’ll find that they often have a top-ten list of annuals, perennials, shrubs, etc for the coming gardening year. Some of them have a mix of old favourites as well as new plants. For example, Burpee lists both Echinacea ‘Sundown’ (a recent new beauty from the Big Sky series of echinaceas) and the proven performer Jacob Cline monarda (bee balm), which would definitely be on my list of top ten perennials. Canada’s Heritage Perennials, on the other hand, don’t have any truly new plants on their top ten; most have been bred in the last decade or so, and are definitely top-performing perennials—Hosta Patriot is one, as is Goldsturm rudbeckia, but there’s certainly nothing that would cause me to search nurseries tirelessly until I found it. Most of these plants I’ve seen growing quite nicely here in Nova Scotia for some years.

A while ago I started writing entries on my favourite plants, old and new. I got somewhat derailed because I was busy worrying about the Avon Peninsula Watershed Preservation Society and a few other things, plus doing my regular deadline dance, but I will get back to them now that gardening season is really approaching. For now, here’s my list of top ten perennials. I won’t go into cultivars or species right now: we’ll just name the genus and I’ll go into detail on each one as I can, okay?

And the top ten perennials that I simply can’t be without are: 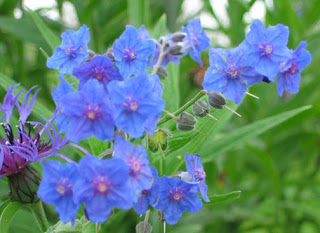 Yes, I know that adds up to thirteen. It’s my list, however, and I can break my own rules, right?