The Stillness of the Morning

Every now and again, there’s a truly perfect winter day up here on the mountain. Surprisingly, we’ve actually been having winter for five days running now, after the deluges of Friday. Even the gale of wind finally blew itself out sometime yesterday morning, and it’s been refreshingly calm ever since.

Ambling out to the mailbox, still a bit bleary-eyed and lacking that second cup of coffee, a dance of light in the driveway caught my attention. I’d dropped a glove last night getting out of the car; frost had rimed this with silver, and the sunlight was causing a pleasing shimmer. A closer look around the yard, and I darted for my camera. While the bluejays scolded me for having the utter gall to disturb them from stuffing themselves into repletion at the feeders, I had a nice ramble around the garden catching a little garden art—fleeting and ephemeral, as the sunlight has since melted the frost, but pleasant none the less.

An intriguing part about walking the garden and observing is that my mind gets to wander to other topics at the same time as I photograph subjects. For the past several weeks, my mind has been troubled by the plight of Nova Scotian farmers; in particular, the province’s pork producers, but other farmers as well. We have a provincial government that is far more interested in developing Cape Breton tourism (more Gaelic and fiddle music, anyone?) and covering its own excesses and misbehaviour than in tending to the problems besetting our own agricultural producers. Talk about shortsightedness. If our farmers go bankrupt, or sell their prime land to become plastic subdivisions, who is going to feed us? Apparently the so-called brain trust in Halifax fail to understand that when food isn’t produced locally but is brought in from elsewhere—by the greedy big-two grocery stores, primarily—we set ourselves up for problems in what is called food security. I’ve written about this before, I realize, both here and in publications, and it seems I’ll have to do it again. So these thoughts, and plenty more, were rolling around as I snapped garden art. I’m not alone in my concerns, of course. Fellow writers are taking to their pens—or their keyboards—and voicing their worries and support for our farmers. I hope it’s not too little too late.

Back to the garden, while I ponder this further.

Although I sometimes grumble about the seedy abundance of teasels, especially when I’m digging out some of their tenacious offspring, these spiky monsters are actually a favourite plant. 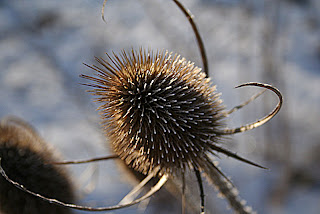 They provide food for countless birds, they give winter interest all season long—right into spring when I finally cut down the seedheads—and they are certainly dramatic in the summer garden too. Days like today, they show their artistic side even moreso.


If I were a better bird-gardener, I’d have a heater in this birdbath to keep the water open; 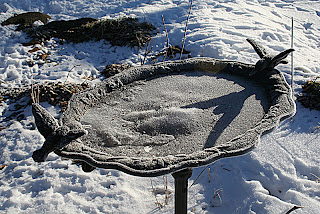 I tell myself the old apples that I put out provide adequate moisture for our feathered friends, and besides that, it could rain again tomorrow. I’ll just enjoy the ice sculpture while it lasts.

This is one reason why I select so many hardy rugosa-type roses for our garden; not only are the fleshy hips loved by many birds, they delight the human eye too. 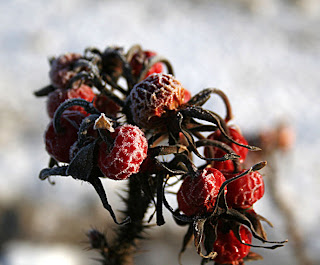 Is this a rose-morel or a piece of modern art? You decide.

It’s hard to believe this is the same rosy milkweed that played host to monarch butterfly caterpillars well into the autumn. It too is a favourite plant because it truly performs all year long. 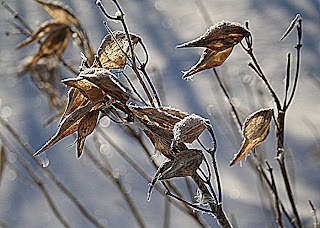 Its only drawback is that it’s difficult to transplant or move unless you find seedlings early in the spring; but it germinates nicely from seed.

And this peaceful shot of a frozen saxifrage rosette—which cultivar, I don’t remember naturally—rounds out this morning’s arty-blog. 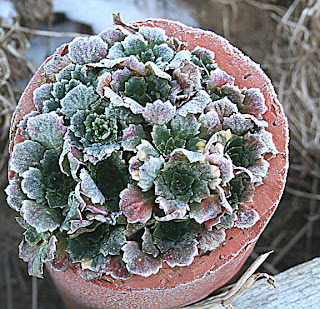 One more thing that I couldn't photograph--the fragrance in the air. Maybe it's because the wind has stopped blowing, at least briefly. But I'm sure I can smell spring.