And they think there’s no global warming?

Talk about the weather vagaries. First, we had a snowstorm a few days ago; not a terrible one, just your average Nova Scotian winter snowfall with wind, snow, and so on. Then it got cold. Waaayyyyy frigidly cold with blustery winds and drifting snow, compliments of the cold snap that western Canada had been enduring earlier in the week. That was fine with me because I wasn’t planning on going outside anyway except to give a talk, (which didn’t happen due to both the weather and my having some weird flu bug). Our century old farmhouse is well used to such weather and we were kept nicely warm, but the only window in the house that isn’t thermal, an antique ‘stained glass’ window, always provides us with the most marvelous frost art during such cold snaps. 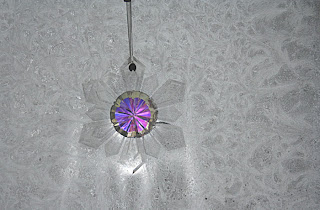 Of course, such cold weather can be hard on plants, which is why we tend to mulch some of the more tender perennials and newer shrubs after we have a freeze. These plants have been snuggled down under their conifer covers (the perfect use for a no-longer needed Christmas tree) for several weeks now and then the blanket of snow further protected them.

However…today we are having a rainstorm. Yes, that’s right, a rainstorm. Wind screaming inspiredly out of the southeast this morning when I went out to check the mailbox was decidedly milder than yesterday, and at that time we were getting the big, wet snowflakes that everyone knows means we could be getting wet shortly. And sure enough, before noon it was pouring in earnest, and it’s continued on throughout the day. So far there’s still quite a bit of snow left around the yard, or there was before dark; but by morning we could well be back where we started.

Still, we’ve had nothing too dramatic one way or the other for weather so far this winter. Lots of wind, but that’s nothing unusual for the Fundy. Whereas our friends on the west coast, and in parts of the US, and now in Europe too, have been receiving one pounding after another. And no matter what Stephen J. Bush and George W. Harper might say, we humans ARE making havoc with our environments and our climates are changing as a result.

I’d like to have decals made up saying “thanks so much for contributing to global warming…” which I would then stick on every Hummer and other obnoxious oversized gargantuan SUV that I could find in parking lots around the Valley. What are these people THINKING??? Who NEEDS something the size of a small tank to run around a city or town? Surely not this simpering, smug bleached blonde botox yuppy mamas that I see so often at the wheel of these monstrosities, driving their pampered children to freearange interpretive yoga or minor-minor-minor-peewee league no-contact no-ice hockey, or advanced geophysics lab classes or whatever else they’ve signed their Nintendo-glazed offsprings up for, all so they can show off more to their neighbours about what THEY have that the others don’t!

Whew. That was a bit of a rant, wasn’t it. On to other topics, I think. Ah yes. Here’s a rare two-headed feline reclining in the chair nearest the woodstove in out kitchen. 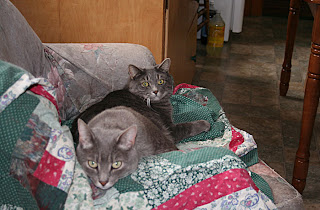 I was vastly amused by these two sharing the same chair, because of the herd, they are two who do not get along as a rule. I happen to adore them both and they seem to regard me as their personal person, so they sometimes are a bit competitive. Hence Simon laying as far away from his neighbour as he can, although their hind ends are touching…

To help drive the winter blues or blahs away, it’s always nice to have something flowering around the house. While our amaryllis are some weeks from flowering, they have all sprouted nicely after their time resting in the basement. I neglected to pot up any bulbs to force for the house in the fall, but there’s no worries about that; there are always potted bulbs on sale at grocery and department stores and some nurseries. Last week a pot of dwarf iris pleaded to come home with me, as did a white hyacinth; both are providing lots of brightness in the office window now, with the hyacinth also offering its sweet fragrance. 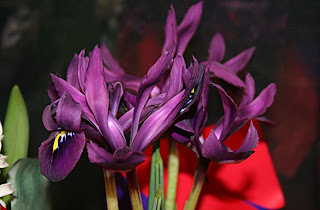 When out doing some things around the yard last week prior to writing an article about how this weather is or isn’t affecting our gardens, I took the secateurs to the forsythia, one of the honeysuckles, and the bittersweet vine. I clipped off a few twigs, brought them in and put them in a vase with a couple of inches of warm water, and let them sit for a few hours. Then I filled the vase with clean water and put it in the kitchen window. Two days ago, I was rewarded with the first forsythia buds: 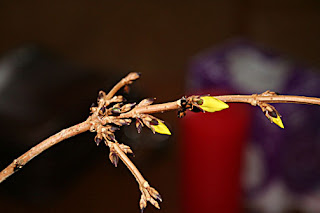 Which are now already opened, with more to follow. The honeysuckle is sulking, mostly because it was showing some leaves and buds when I cut it, I think, but the bittersweet is showing nice green buds too. Forcing twigs is just SO easy with some plants. I’ve never tried our magnolia because it’s still too small, and the same with the two quince shrubs. The warm smiling yellow of forsythia, and the exhuberant growth of bittersweet, and even some twigs of red osier dogwood, never fail to produce smiles throughout whatever kind of winter we’re having.