Toronto's Diva gets a facelift 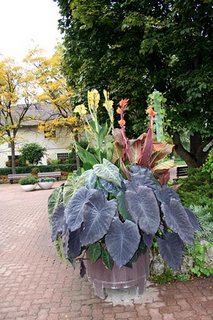 I’m a trooper when it comes to visiting gardens. After rolling into Toronto at nearly 11 pm, where the highlight of the trip was being met by my son Ryan, (newly moved to Toronto), I was up and going again by 745 the next morning. First I ‘rode the rocket’ of the Toronto subway to Eglinton, where a transfer to a bus took me down the road a few more miles to the Toronto Botanical Gardens at Lawrence Street East. There I found a surprise—these gardens are open to the public at no charge! In the courtyard nearest the main building, a group of seniors were drifting through the movements of tai chi. I wandered around for a little while before being met by my guide for the visit, a very nice man named (I think), Ken—a Friend of the Garden who volunteers regularly at the Music garden downtown at Harbourfront, but who also lives near the TBG and was willing to give up an hour or so of his Saturday morning to squire me around.

Like many aging dowagers, the TBG is going through a period of rejuvenation. But in this case, it’s not liposuction and botox that is bringing this space back to its glory days, but the vision and dedication of its planners and planters. Much of the plantings now on display are new, tucked into the ground this spring, after a massive renovation of the grounds and the main building of the Gardens. There are twelve themed gardens in total, ranging from a very cool herb/kitchen garden, where each year a particular culture’s vegetables will be showcased, a terraced garden, a trial or show garden focusing on choice and sometimes unusual plants suitable for city gardening, a spiral mound (originally meant to be covered in thyme but currently grassed) from which you can view most of the Garden’s layout, and far more. Walkways are wide and most are paved, and there’s a lot to see in a compact locale—just like most Toronto yards, the Garden make the most of its available space. 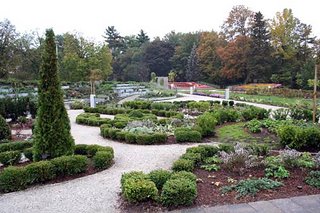 My host said that people are sometimes offput by the fact that the gardens aren’t all as full and lush as they expect—but I think this is actually excellent, because it also gives real gardeners, whether seasoned or new, a look at how a garden develops and grows over a period of time. After all, we all face this, especially when planting perennials, trees and shrubs—things look a little sparse initially. But I thought everything looked excellent. There are marvelous drifts of grasses near the entrance to the parking area; these look like they’ve been here for a while; then as we walk down the stone-paved paths towards the heart of the property, there is a wonderful planting that will, in time, look like a wildflower or prairie meadow planting, featuring some native as well as introduced species. There’s a unique long curving wall, built using a variety of materials from the portion of the building that was torn down for renovating, and planted with sempervivums and other groundcovering plants. Some think this planting resembles a train, or perhaps a slice of the Niagara Escarpment—I just know that it’s quite striking now and will be even moreso next year when it fills in further.

The two carpet bedding displays at one end of the Gardens acknowledge another garden, Edwards Gardens, which is a City of Toronto park. The TBG is a charitable organization, funded by generous patrons and donors around the city, and shares space, as it were, with the neighbouring Edward Gardens. 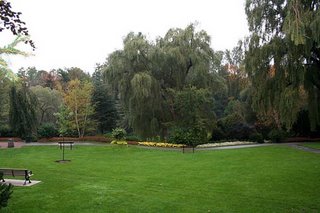 I didn’t have a whole lot of time to visit Edward, but looked longingly down a hill—one of Toronto’s famous ravines’ at mature trees, a lovely creek, walking trails and much more. 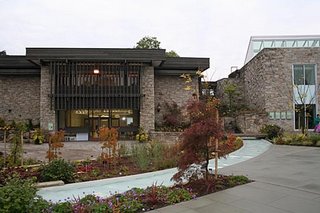 The Garden Hall itself has areas that can be rented out, whether for weddings or other special events. Ajoining one part of the facility is the Floral Hall Courtyard, a screened in terrace also ideal for weddings and such. About this courtyard, I have to comment, because this is the third site in two days that I’ve seen featuring horsetails in a design. Not the irritating field horsetail, but the scouring rush, Equisetum hyemale, which DOES have a sort of Oriental quality to it and look really quite striking in a dedicated bed—bounded by stone so it can’t jump elsewhere.

My only negative comment about my visit is that I hope that the TBG revises their website soon—it doesn’t display properly, is hard to navigate and has more administrative stuff on it than information about the gardens themselves, which is why I haven’t bothered adding a link to its URL in this entry.

One amusing aside—during my stay at the Fairmont Royal York, I opened a bottle of mineral water in my room, thinking it was the water they provide with their turndown service. Imagine my surprise when my son announced that he’d never SEEN an EIGHT DOLLAR bottle of water before! When I went to check out, I told the clerk to add the bottle to my tab (for Internet service—this is the only hotel I’ve stayed in in months that charges for high speed internet—a black mark on them) but she graciously dropped that charge and seemed somewhat embarrassed at the high price. I was more amused than annoyed, but was also touched by her thoughtfulness.

There are many more gardens throughout the city, including at the famed Casa Loma, which I'd originally been scheduled to visit but which was just not possible in the time allowed. Maybe I'll go some other time, although Toronto gets more than enough press without needing any from me. And yes, I'll confess right here--Toronto is still not my favourite city by a long shot, even if my son does live there! 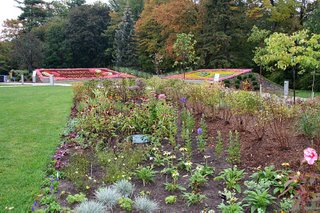