Well, that’s about how I felt on Sunday morning, after getting into Windsor late Saturday night. Nice surprise at the Hilton when I got there—along with a great information package about the city and its parks, etc, there was a lovely bottle of locally produced Late Harvest Vidal…which I’ve faithfully tucked away in my bag to bring home to share with my better half. And my room was on the 21st floor, looking out on the Detroit River, the Ambassador Bridge, and Detroit. Wow….a nice place to visit but I wouldn’t wanna live there, though. It’s the flattest part of the country I’ve ever seen next to the Prairies, of course. And in fact, this part of southwestern Ontario is the edge of what was once a mighty tallgrass prairie! I didn’t know that, not until I read the package of information waiting for me at the Hilton when I arrived on Saturday night. The remnants of this once mighty ecosystem are under protection at the Ojibway Prairie Provincial Natural Preserve, located on the edge of Windsor. Of course, I could see none of this from my hotel window, on the 21st floor of the hotel, overlooking the Detroit River, the Ambassador Bridge, and of course, Detroit. 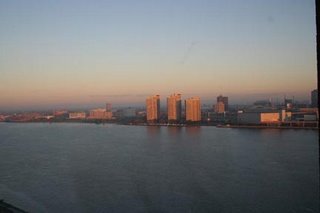 If Windsor and Detroit are sister cities, Windsor is obviously the beautiful sister. What an attractive, green, and clean city this is! I spent more time exploring Windsor than I did anywhere on the rest of my trip except Burlington, and liked what I saw. I had a guided tour all day Sunday courtesy of the Director of Parks, Don Sadler, and his partner Lou Ann Barnett, a professional photographer from whom I could learn a lot, if I could follow her around for a few days. They picked me up Sunday morning and proceeded to show me everything from the incredibly lovely riverside gardens to a couple of nature parks to several recreation parks to distinctive formal gardens to that tallgrass prairie. And I was smitten. 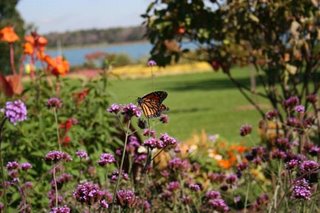 Windsor is a city of around 200,000, and while there have been some hardtimes courtesy of the downturn of the American car manufacturing industry, this is a city that loves its public green spaces. And not only that, the community supports that love with financial backing, so that the parks and green spaces and athletic fields are well tended, beautifully groomed in fact—and done so using green gardening techniques as much as possible. Put a city beside a lovely waterway—and there’s swimming at public spaces along the way—and clean up the waterfront to become a series of parks and gardens, and it’s amazing how people will flock to use it. On weekdays, office workers fill the parking lots as they take a break to walk through the gardens and along the waterfront; on the weekend, it’s family time, with scores of people out with their children, young couples dreaming their way along the waterfront…and there’s no litter to be seen! People actually use the large but discreet garbage bins! I was delighted by that, being accustomed to seeing the disrespect shown in some communities for public spaces.

The riverside gardens include three main areas; Reaume Park and Coventry Gardens, and features something for everyone. Children enjoy hunting through the gardens to find the various topiary sculptures of animals from dogs to dragons; the huge floating fountain, the Charlie Brooks Memorial Peace Fountain, creates more than 2 dozen spray patterns as it throws water high into the air; 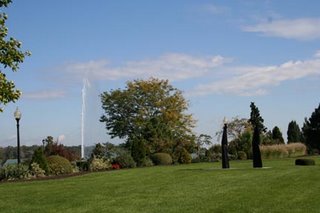 the gardens are full of imaginative plantings, using a wide variety of annuals, perennials, shrubs, and even tender perennials and tropicals (which go indoors for the winter, of course.) Further along is a wildflower garden, then the Bert Weeks Memorial Garden, built in honour of a former mayor. This place was incredible—well planted with perennial grasses, which were in full bloom and song when I visited, and which provided a wonderful counterpoint to the sound of music from the huge water feature called the reflecting pool. At the river’s edge is an interesting brick structure, which now is used to pump water not to the community but to irrigate the gardens along the river. 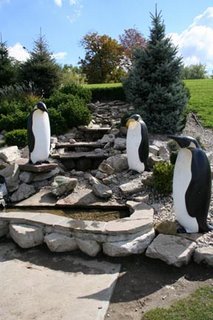 Naturally, I was entranced by the whole riverside garden experience, but there was far more. Further along Riverside Drive is Odette Sculpture Park, which is dedicated to a generous number of modern art sculptures. There are two totem poles, bronzes of horses and humans, wire sculpture, and my favourite—penguins!

One thing about Windsor—it’s a flat, flat city. There are two hills in the entire city, and both of those are manmade, reclaimed areas that are natural parks with trails for runners and cyclists and others to enjoy. We went to the top of both these hills, (Malden and Ganatchio) and could survey not only the city, but across the river to Detroit! Naturally, one of these hills is much loved as a toboggan run in winter—when there is snow that lasts any amount of time, of course, because this is a mild-wintered part of the country. 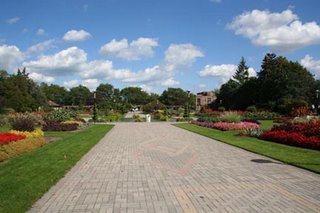 From the wild beauty of Ojibway and Malden and the Ganatchio Trail, we went to a completely different area: Jackson Park, dedicated by Queen Elizabeth some years ago, and featuring formal gardens and walkways (perfect for wedding pictures) and several war memorials to veterans. That was a particularly striking sight—there are two replica planes in one section of the garden, a Spitfire and a Hurricane. 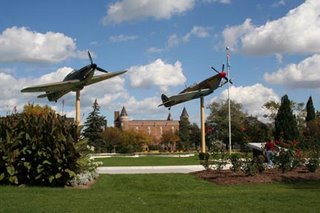 The third, a Lancaster, is being restored and is to be located in another park, but its silhouette has been outlined on the ground under the two planes, a haunting echo and a moving tribute to the sacrifice made by so many. Seems highly appropriate especially given our current state of affairs in Afghanistan.

There was almost too much to take in all in one day in Windsor—were I planning another trip, I would spend no less than two days in each of the cities I visited on this trip, and more if I could. It would be hard to pick a favourite site, either in Windsor or on the whole trip, so I won’t—I enjoyed all of them for different reasons, as each is very good at what it does.

After an early supper, I returned to my room to download another 150 or so photos, and pack up for a very early morning. Two days on trains, basically, brought me through Ontario and Quebec and back into the Maritimes via the Ocean again. About Miramichi, however, I decided I was getting restless to be on the ground again, and called my longsuffering spouse to meet me in Truro. It’s always wonderful to go away—and this was an exceptionally fine trip—but it’s even more wonderful to see my darling other half standing on the platform waiting for me. And be it ever so humble, there’s no garden quite like our own, is there?