Beauty for a day--the daylily 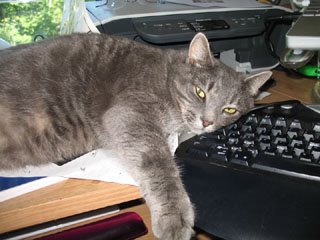 Well, there’s no such thing as moderation in our weather anymore. We’ve gone from muggy and humid and foggy to just plain hot hot hot! Hot enough to cause little cats to just lay around in puddles of tiredness, too bushed to do anything more than sleep. That includes laying on my desk leaning against the laptop keyboard, when they’re just too tired to move, right Spunky Boomerang?

The hummingbirds and honeybees are still going strong outside, and it’s fun to watch the hummers roaring back and forth between flowers and feeders. Earlier this morning, before it was quite so sweltering, my darling husband pointed out the numbers of honeybees feasting on three sea holly blossoms…(the big blue Eryngium, I forget the species at the moment but it looks like Miss Wilmott’s Ghost except for being blue, not silver.) Not to be confused with E. planum, the smaller flowered seaholly which we have in various spots in the yard.

The heat and sun has helped to dry up plants that were feeling a bit overwhelmed by all the wet, including the roses that were balling their blossoms into soggy tissue wads…right now there are fireworks in the garden, as all the yellow evening primroses are in bloom, as are the brilliant orange Asiatic lilies; a real pretty type, not the common ones but a vibrant orange without speckles or spots of contrasting colour. The red bergamot Jacob Kline is also in bloom, as is the Maltese Cross, a host of annual poppies, the giant Macrocephala knapweed, and there are cooling touches in the hot colour scheme being contributed by monkshood, veronica, and some of the darker foliage like Diablo ninebark and Rosy Glow barberry.

And the daylilies have started to bloom. Of course, the oldfashioned ditch lily, Hemercallis fulva, is the first with its bright orange flowers. It’s common as crabgrass but I still love them because they are tall and elegant and will flower anyway.
But the REAL obsessions with daylilies are all the thousands of gorgeous colour combinations, flower sizes and shapes that can be found in the named hybrids—of which there are over 50,000, and perhaps even over 60,000 by now. There’s a daylily for everyone—or five or six dozen, or five or six hundred—and for every spot in your garden. Take for example, this exquisite Minstrel's Fire...I don't have it--yet. But I will. 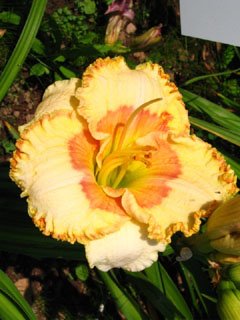 I’ve loved daylilies for a long time, but I REALLY got into them after I first visited Wayne Ward and Wayne Storrie’s labour of love, Canning Daylily Gardens right here in our own community. The two Waynes have been into gardening for years, but a few years back they decided to try operating a daylily nursery—and it’s a wild success. They have over 800 cultivars growing in the display gardens, and somewhere between 350-450 cultivars for sale. It’s pretty hard to pick out just a few that you like, which is why I have some five dozen or so now. Some are fragrant, some aren’t. Some flower all season long, others only for a few weeks; they come in every colour but true blue and true black, but daylily breeders are a persistant bunch, and one of these days….

I have bought a number of daylilies from Wayne and Wayne so far this season, including the gorgeous Smuggler’s Gold, the deeply purple Strutter’s Ball, a wonderfully contrasting Edge Ahead, the cute as a bug Bug’s Hug, and the exquisite Malaysian Monarch. Today, the Waynes were cleaning up the display gardens prior to the official opening of their Open House days, from July 20-31, and they were moving a couple of clumps of deep red daylilies, name and breeding unknown. Would I like to have them? Well…it wasn’t long before these two big clumps were in my car, ready to go home and be planted…they may be of unknown name and breeding, but they’re going to be named; the taller of the two will be Big Wayne Storrie, and the shorter one will be Little Wayne Ward, and they’re going in my memory garden for Marilyn; just as the two azaleas I brought home from Bill Wilgenhof and Sharon Bryson’s gorgeous place in Antigonish got named Bill and Sharon. After all, Bill bred the azaleas himself, and what better way to pay tribute to the generosity of fellow plant enthusiasts than to call their plants (at least in my garden) by the name of the breeder?

Speaking of breeders, the daylily world was saddened on Friday at the death of daylily breeder Steve Moldovan at age 68. Wayne and Wayne had the privilege of meeting this giant of the hemerocallis world at the national daylily meetings in Niagara back in the spring, and were charmed by his warmth as well as his vast knowledge of daylilies. The world is a little poorer for his passing—but heaven should be well and truly laden with daylilies.

In the meantime, if you're in the Canning area, drop out to Canning Daylily Gardens, 165 Pereaux Rd, and visit the gardens, which are nearly in full bloom. The two Waynes have daylilies and hostas for sale, but you don't have to buy anything to come and visit--they're always happy to meet new people, and to talk about their passion for daylilies. But I defy anyone to come away without purchasing a daylily...or three...or three dozen.... 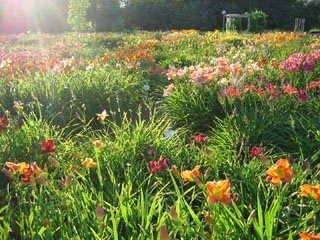