Oh, me nerves, as my fellow Newfoundlanders would say. We are into day I-don’t-know-what of high humidity, mega-fog, abrupt tropical showers, and other irritations. One friend is beginning to think he should wear a disguise when he goes outside, because every time he shows his face, it rains. My darling husband feels it’s all HIS fault it is so excessively wet, because whenever he plans to start mowing the lawn, putting a line of clothes out to dry, or even thinks about having a nap, the heavens open. It’s ridiculous. There’s mould on the horse’s bridle. The concrete floors in the barn are weeping moisture. Annuals are rotting off in containers; containers that we mixed with a little bit of moisture retaining product so as not to have to water so often. As if…No one can sleep.

Everyone is as touchy as a bear with a sore paw, including the cats…here’s Tigger and Mungus saying “this here window ain’t big enough for both of us…” Tigger, the senior cat, may not have double paws like Mungus does, but he’s the fastest paw in the house, and Mungus finally decided that maybe it would be a good plan to back down. 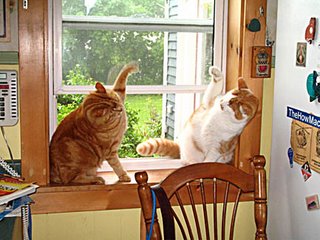 Mungus is a smart cat in all kinds of ways. Because he’s the apple of my darling husband’s eyes, he’s not allowed outside without adult supervision, which in his case means going on a leash, which he learned to do in about five minutes. He likes to be wherever we are, and he whines gently if he’s left alone outdoors, staked out on the lawn like a horse. He enjoys helping me in the garden, mostly by rolling around in the grass and purring a lot, which works fine for me, and with those polydactyl paddypaws he can really dig well, too. Indoors, he generally likes to burrow under the bedcovers and then start his LOUD, diesel engine purr…but he’s too hot to do that in these dogdays of June—why are they dog days, not cat days?—so he’s mostly laying in other windows (those not chosen by Tigger as his favourite window of the moment) and waiting, like the rest of us, for better weather.

The garden is wildly out of control, with weeds exploding into growth every time we have another rainshower. But the perennials are also growing exuberantly, although several of the peonies have blackened buds from all the wet weather and the fog. The perennial Oriental poppies have been doing beautifully when NOT becoming bedraggled tissue paper in the rain, and there are nice bursts of colour from the spiderworts, irises, soapwort and wood anemone. Most exquisite colour in the garden right now? The exultant true blue of the blue corydalis in the front bed by the door. 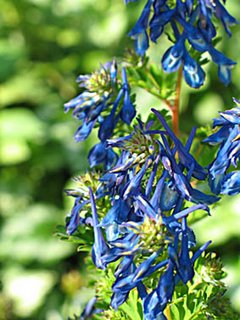 And as a bonus, it’s fragrant too. I am going to plant one of the Sundown Echinaceas near it, I think. That blue and the orange-melon of the echinacea, coupled with both their sweet fragrances, will be divine.

I had a really, really exciting experience yesterday—I had the great good honour of interviewing Margaret Atwood, she of Alias Grace, The Handmaid’s Tale, Moving Targets, and Oryx and Crake fame—among many others. I stayed up wayyyyyyy too late the night before, preparing my questions for Ms. Atwood, worrying about what she would be like to interview. Would she answer my questions? Would she clam up? Would she be irritable, bored, distant? Would she cut me to shreds.

She was an interviewing dream. It’s funny, she is this tremendous literary giant who you expect to be somehow larger than life, but in person she’s small, delicate of structure but wirey too, and with a firm handshake, a genuinely warm personality and a wonderful smile. We had 50 minutes scheduled, but we went to over an hour—I kept worrying but she seemed totally unconcerned. Maybe she enjoyed herself too. We had some commonalities—her parents are both Nova Scotians, one from the south shore and one from the Valley; she’s a gardener of great enthusiasm who told me about her challenges, and we chuckled over how plants sometimes just plain die. We share similar concerns over global warming, the Harperites dissing the Kyoto protocol, the absolute disdain of Harper for ‘alarmists.’ She put it so well; (I’m going to paraphrase here, as I haven’t yet transcribed the whole interview). “an alarmist is sounding an alarm—which is something that is warning of danger.Why is Harper dismissing people who are warning of danger to our world?” She thinks Al Gore is a marvelous person, and she met him at Hay-on-Wye during the festival there, where she said that after his talk on climate change, if he’d called people up to the front to be saved, in the manner of evangelical preachers reaching out to the sinner, everyone would have gone forward—to take up the cause of doing something about global warming.

Maybe all this muggy, wet, almost-tropical weather is an alarm that we should take seriously.