Actually, I have a confession. Currently I’m without windowboxes. I have plenty of wonderful containers for outside, and some of them could be windowboxes if they were mounted on the house, but I need to cajole my dearly beloved, long-suffering spouse into building us three new ones that are all the same, and then put them up after we do some painting on the house this spring.

I love container plantings of all kinds, but the more interesting, unusual and colourful the plants, the better I like them. Ever hear of Anagallis? 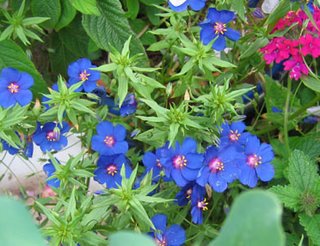 It’s an annual, sometimes called Blue Pimpernel, with truly dazzling, cobalt blue flowers that close up on cloudy days or when it’s going to rain (hence another common name, Poor Man’s Weather Glass). Now there’s an equally dazzling anagallis called Wildcat Orange, and it’s awesome paired up with the blue and with something hotly magenta, and some vibrant lime-green foliage.

Are some of you shuddering? That’s okay. We all have different colour tastes, and I love to play with colour in containers, because if something doesn’t work—there’s always next year. Or I’ll just add a couple of different plants with more muted colours to tone down the mix if it doesn’t work like I anticipated it would after it’s planted. For containers, hanging baskets, windowboxes, I do like vibrant, especially in spring when we’re all hungry for something bright and cheery.

Like Sarah Raven, I like the bold and brilliant garden colours, jewel colours rather than pastels. This year, I hope to include those two anagallis, some brilliant green Bells of Ireland, and probably a hot coloured verbena in at least one planting. Hey, has anyone checked the colours on prom dresses lately? 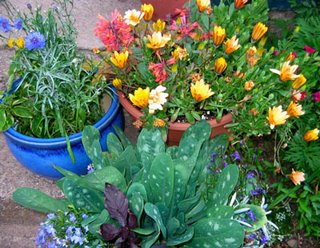 They’re just as vibrant, with neon oranges and pinks together, or turqoise and lime green…but I think I’ll keep my colour playfulness in the garden. Thankfully I’m not likely to wear a prom dress any time in this current reincarnation.

But speaking of windowboxes, for those who belong to garden clubs in the Maritimes, there’s something fun going to happen at this year’s Saltscapes Expo. Here’s what I wrote in an email and newsletter that’s going out to clubs in our region:

"Spring is still a ways off, but those of us planning for the Saltscapes East Coast Expo know that it's coming soon. For those of you who don't know about this, Saltscapes magazine hosts an annual exhibition "Saltscapes Live" , a three day extravaganza of fun, food, activities, shopping, demonstrations and more which will be held at April 28, 29, and 30 at Exhibition Park in Halifax.

"This year, we're excited to announce that we've got a new event tailored just for gardeners. As one of my many hats, (and because I'm Saltscapes' Gardening Editor), I'm delighted to be coordinating the First Annual Saltscapes Expo Windowbox competition, which will run throughout the show at Exhibition Park.

"This competition is open to garden clubs throughout Atlantic Canada. The rules are quite simple: dress up a windowbox in any kind of live plants, bring it to the show by 7 pm on Thursday, April 27. The entry fee of 15.00 per club (one entry per club, please) will be donated to Communities in Bloom. In return for a club's entry, the club will received an autographed copy of The Atlantic Gardener's Greenbook (written by yours truly) for their club library or to use as a door prize at future meetings.

"The entries will be judged by a panel of 3 judges, who will award 1st, 2nd, 3rd and honourable mention awards. There will also be a People's Choice award, voted on by visitors to the show and awarded with other prizes on Sunday afternoon, April 30th. Prizes will include a slate plaque donated by Scotia Slate, and a prize package of items which can be used by the club in any way they wish--whether as raffle items, or door prizes, or whatever! We've already got donations rolling in, and are really excited at the support we're receiving.

"Now we're hoping for an equally excited response from the gardeners of Atlantic Canada. Please consider entering the competition: you may use any sort of windowbox you want, up to 4 feet in length (bearing in mind it has to be transported and can't be too heavy) plus any sort of plants you desire--annuals, perennials, heaths and heathers, native plants, orchids, cacti, other succulents, spring bulbs--the only limit is your imagination, and you're all gardeners so I KNOW you have imagination!! We feel this will bring more attention (and more members) to the garden clubs of Atlantic Canada, which will be a great benefit to all who share our passion for planting. "

I hope this will be well received by our clubs! The judges have already been asked and have agreed (I’m not one of them, since I’m coordinating the competition) and some prizes have already been donated by various businesses. We expect to see some neat entries to this competition—late April is a bit early for getting bedding plants, but we’ve stipulated that anything goes for plant material, whether house plants, native plants, cacti, orchids…I hope plenty of clubs take up the friendly challenge.