Milk comes from a box, carrots come from the store? 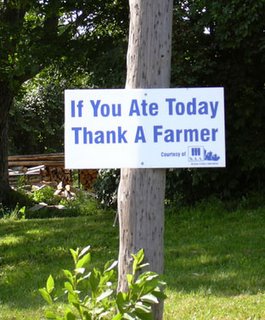 Yesterday I stopped at a local farm to buy some chickens. Not live ones; big, tender, wonderful chickens, grown to beyond the tiny size that grocery stores demand of farmers, processed at a local, inspected meat plant. I’ve been buying chickens from this farmer for years. Likewise, we get a quarter of beef from a pair of brothers who farm and also operate a sawmill, honey from a local beekeeper, vegetables and fruits from local farm markets (except for things like oranges and other non-local produce.)

We get excellent quality food, and at an excellent price; in some cases maybe slightly more than you’d pay in a grocery store, but it’s local, and the money is going to the farmer, not to Wal-Mart or Costco or superstore or whatever big box store is gouging farmers these days.

Now, I get very cranky at anyone dissing farmers. I'm not a farmer, and not from a farming family, unless you count the family farm my grandparents had while raising their kids in the thirties and forties. I went to Agricultural College--proud to be an Aggie!-- and I write about farming when I can, even having one of my stories on the family farm nominated for a journalism award. But I'm proud of farmers and protective of them because they are the people who grow the food we eat. Despite the fact that it seems a whole sector of the populace thinks that food just spontaneously generates in supermarkets, prepackaged, prepared, de-nutritionalized and with enough chemicals and additives in it that it should be glow-in-the-dark, nope, that’s not how a carrot is made. A farmer of my acquaintance told me about a visitor to his dairy farm who got QUITE indignant when it was explained to him that milk came from cows. Seems he thought that was obscene, or something. Bet he climbed into his 8 cylinder 451 SUV and stormed off to McDonalds for a Mcburger to calm his nerves.

Why am I talking about this? On a blog mostly dedicated to gardening? Because it’s my blog and I can—but mostly, because I really, really care about the welfare of our farms and our rural, farming communities. Because of something I read just the other day, about the income of farmers in our country. According to the National Farmers Union, in 2005, average farm income, before any sort of government payments, was negative 12,000 per farm. PER farm. Imagine if you worked your guts out day in and day out, paid all your expenses and bills and taxes and more expenses, and at the end of the year had a 12,000 negative income to show for all your labour! Is it any wonder so many of our farmers are discouraged, selling out, working two jobs as well as trying to farm?

Why is this happening? There are many reasons, but right here, I put a lot of the blame on the supermarkets. Never mind that one of them is based in Atlantic Canada and brags about how it buys local products. “Local” can mean up to 24 hours trucking time away, apparently. But the real deal is this: although the price of everything, from seed to fuel to fertilizer to feed to tractors to plastic bags for bagging crops, has gone up drastically—fuel prices alone about 30 percent in the past year—the farmer is not getting any better prices for the food they produce. Oh, the price of food is going up all the time in the stores—blaming it on the high cost of trucking, partly—but that extra money isn’t going to the farmers, but to the middlemen.

So, what do we do to help? Buy local food. Go to your local farmers markets, and to farm roadside stands. Get to know the beef farmer down the road, the beekeeper, the apple grower. Ask them questions. Buy their products. Savour the flavour. That chicken we roasted for supper tonight was delicious, moist, full of flavour, not overly fat, and it’ll last for three or four meals, just like a turkey. And it helped out my neighbour, who in turn buys feed from the local mill, and fertilizer from a local farm supply store, and does his banking at the community credit union…

One of the nicest things I’ve seen a magazine do to help out farmers is the Buy Local Beef Directory that DvL Publishing puts out in its magazines as well as posting online. While not exhaustive, it gives a good number of farmers who sell their own beef, including some organic producers. This directory was born after the BSE crisis of 2003 threatened to destroy many beef farmers in our country. Somehow, many of them have hung on, mostly because they raise other crops or livestock and work off farm as well.

What’s the future for farmers in Atlantic Canada? Unless something changes dramatically, I wonder if we’ll even HAVE any farmers in another twenty years.

I’ll do what I can to spread their message. Support your local farmer. I don’t care if you buy conventional or organic foods, just buy them locally. Get out to your local farmers market or roadside stand. Get to know the farmers who produce your food, and ask them questions. They’re not trying to hide anything. Canada has one of the safest food supplies in the world, and also one of the cheapest. But when the last farm has been turned into a subdivision, and the last farmer’s child has gone to work in a city somewhere, and we’re paying 27.00 a litre for milk coming from China, maybe we’ll realize just how important local farmers were to our economy.

Like the sign says, If you ate today, thank a farmer. Better yet, buy some food from him.

Email ThisBlogThis!Share to TwitterShare to FacebookShare to Pinterest
Labels: not really gardening, rant about life