If I had a million dollars...I'd have WAY more plants!

In a perfect world, (meaning one with more money and time) I’d do some serious renovating to our house. We’d have a solarium or a conservatory, or a something with lots of glass and room for even more plants than we have now, where I could go when I'm feeling garden deprived in the height of winter's bleakness. I’d also have one office, or an office in one room, not spread out through three rooms and a hallway. My other have would have a heated workshop in the barn where he could create more marvelous garden furniture, birdhouses, and the like. We’d have a hottub outside where we could rest our aching muscles and contemplate the stars or the fog or the snow. And we’d have the gardens looking the way I’d like to see them.

Of all those things, the garden getting where I’d like to see it is the most likely to happen anytime soon. After all, I’m a writer, a freelance one at that, in Atlantic Canada…not a bank manager, a lawyer, a politician, or a highly paid civil servant. But that’s okay, because I’m also independent, and if I want to take three hours off to work in the garden in the middle of the day, and then work at night…it’s just fine.

And with a garden, you can pick up a few plants here, a few plants there…build a pathway this year, a wall the next, a garden room the next. You can’t put a few panes of glass into a solarium room one year, a few more the next. So I’ll work on the garden. Which is what we’ve been doing, of course, since we bought this place.

Right now, like many of us, I’m dreaming my way through magazines and catalogues and websites, looking at plants both new and old that I simply can’t live without. Today’s column in the Halifax Herald includes ten plant genera that I really like and feel are underused; but I have a wishlist of plants that I plan to get this year. 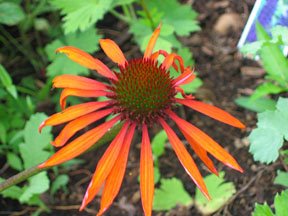 Last year, I bought an Orange Meadowbrite echinacea from a local nursery. It was expensive, and it wasn’t in good shape, but I’ve coveted that plant since first reading about it several years ago, and I had to have it. I hope it pulls through this winter, but if it doesn’t, the nursery has a year-long guarantee on its plants. I’ve returned at most half a dozen plants over the past half dozen years. So there will be no problem if it did succumb to whatever. There are more new echinaceas on the market now, too, in shades of orange, yellow, deep carmine, and even green—or rather, greenish. Probably I’ll add one or two of those, if I can find them locally.

Here are some other plants I intend to have more of:

Heaths and heathers. Blame it on Bunchberry Nurseries; at their open house several years ago, I became utterly besotted with heaths and heathers—not so much for the bloom, which is great, but for the foliage colours. The display gardens around Bunchberry, in Upper Clements near Annapolis Royal, are phenomenal; Jamie Ellison and Jill Covill have collected and propagated some unique and choice specimens over the years, not only of members of the Ericaceaous family of plants, but also of sempervivums and other alpine plants, evergreens both broadleaf and needled, grasses…problem is, I want one of everything and two of some! I’m starting out small, testing the drainage and protection from wind they might need—my friends Ami and Ian McKay have some delectable heathers in their back garden, growing to nice size now, here in our community so hopefully the half dozen I have planted out back will also thrive and grow.

Grasses. Yes, I’ve seen the light where grasses are concerned. And I’m sure, with the mild fall we had, many of you have also gotten the grass bug. Where we had next to no snow or frost leading up to Christmas, plantings of perennial grasses have stayed tall and gorgeous this year. Some of them have also been planted now for three or four or more years and are really getting some size to them too. Last year we put in probably a dozen different grasses, (I’m including sedges in the catchall term grass), including a gorgeous Bromus Skinner’s Gold purchased from Hillendale Perennials near Truro, and both a bronze and leatherleaf sedge from Springvale Nurseries, and several Miscanthus varieties from Blomidon Nurseries. I can’t wait to see how they do this year.

Trees. My friend Paul Grimm of Springvale Nurseries says, “The best time to plant a tree was twenty years ago; the next best time is right now.” Well, I’ll wait for spring, but on my wish list are the Dawn Redwood, Metasequoia glyptostrobioides, which Captain Dick Steele first told me about 4 years back. Also needing to come and live with us are a Japanese Katsura, a Devil’s Walking Stick, (Aralia elata) a couple of lindens and several amelanchiers (shadbush or chuckley pears). This doesn’t include the shrubs that I’m planning to add…I promise a blog entry on shrubs soon.

Foliage Perennials: What I’ll probably avoid are hostas and heucheras, at least til the ones we have now get well established and I see whether I like them where they are. Last year we added about a dozen hostas from various nurseries and fellow gardening enthusiasts, and three heucheras—Obsidian, Lime Rickey, and Marmalade, for a nice colour range. I really like perennials with interesting coloured foliage, including those that flower, but I don’t care if they flower or not if I like the foliage. Last year at the Royal Botanical Gardens in Hamilton, I saw this marvelous Stachys, a softly variegated green and gold variety. I resisted the urge to snip a piece…and it was hard…but now I’ve found someone who both knows what it is and has a couple of plants. So hopefully I’ll get my hands on Stachys byzantina ‘Primrose Heron’ come spring.

Flowering perennials. Oh, where to start? More euphorbias; more verbascums; more campanulas; (different ones, not more of what we already have!) More Oriental poppies; and at least three plants that I’ve never grown before. I’ll let you know what those will be when I figure out for myself.

Bulbs: More lilies, especially fragrant ones, definitely! I need to divide those we have now, which are mostly Asiastics, lovely but scent free. Non-hardy bulbs and tubers I don’t tend to grow a lot of, because of course you’re supposed to lift and store them. Well, I’m away so much in the fall…but Carol Cowan of the Netherland Bulb Information Centre told me over lunch to stop feeling guilty. “You plant annuals and let them die back at summer’s end,” she pointed out. “do the same with your tender bulbs if you want.” Good point, Carol. Maybe this year I’ll do just that.