A writer’s job is to write, correct? Yes…but also to do it well, and with passion. I am passionate about writing, because it’s not just what I do—it’s who I have always been, though it took many years for the still small voice inside of me to drown out the voice of the censor/editor who sits on my shoulder, offering criticisms. That censor has become more of an editor now, a friend rather than a hindrance. But when he does get too critical, I feed him dark chocolate, because he can’t talk with his mouth full.

So I’ve had a writing project on my plate for nearly a year, one that I thought I really, really wanted to do, because it’s a subject that I’ve had interest in ever since the event happened. I had some unique contacts and perspectives, and thought it would be a fun project.

Somewhere along the way, something changed.

I worked on this project while I was at sea with the Canadian Coast Guard last fall. I’ve worked at it sporadically in between writing and seeing the Atlantic Gardener’s Greenbook come into print. But it hasn’t come together, and I didn’t know why.

I’ve written here before that gardeners are a generous lot. So are professional writers, at least the ones I am associated with. I’m particularly fortunate to belong to PWAC, the Professional Writers Association of Canada, a 30 year old organization of non-fiction writers flung across this country. We have several internal, private, mailing lists, including the “L”, which is our virtual watercooler. We discuss losing weight, the pleasures of chocolate, red wine, and cats, the foolishness of politicians, whether Macs are better than PCs (yup, of course!), but also a huge range of topics pertaining to our profession/identity as writers.

A few days ago I had a virtual venting, and sent to the “L” a post about my struggles with this book project. The responses I got were warm, wise, and genuine. The one that stopped me in my tracks went like this, in part:

“Be the Jodi who moves me to tears, not the Jodi who produces inoffensive content to go between the ads. What do you want to be when you grow up? There, right there, just for a second, before you could censor yourself, your bliss went flitting by, but then you said, ‘Oh no. That’s not possible, not responsible, not acceptable.’ Follow your bliss, kiddo. We only go around once. No one lies on their deathbed saying, ‘damn, I wish I’d spent more time at the office.’”

Whew. That moved ME to tears. And caused me to look deeper. For the most part, I AM following my bliss…living where I do, with my dearly beloved husband and our menagerie of animals, writing about the things that I’m passionate about. And I do have some other projects in mind, that will come to fruition when it’s time. Still, even after reading the letters I received from my friends and colleagues, I needed to think deeply and make the decision honestly.

This morning it’s like spring again, unnaturally mild. In my office, it smells like spring. Back in November, I put a large hyacinth bulb into a bright orange forcing glass filled with water, set it on the window, and left it to do its thing. While I was away yesterday, it really opened up, and today, the whole upstairs is awash in this glorious sweet fragrance. 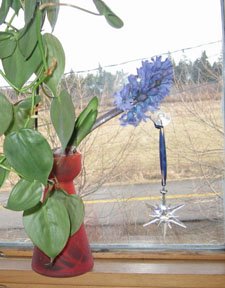 I sat and contemplated this explosion of colour and scent for a while, after rereading the letters about my project. I moved the vase to the window behind my desk, where there’s also a crystal snowflake. When the sun comes up, this room is filled with rainbows of light, which always make me happy. Watching the watery sunlight outside on the gardens, looking around at the icons of identity in my office, I realized it was time to say no.

Far better to write with my heart, which is what I’m known for doing, than do something that is in my head—I could do it well, but it won’t touch people the way I want it to. Monday, I call the publisher and say so. Without guilt, either.