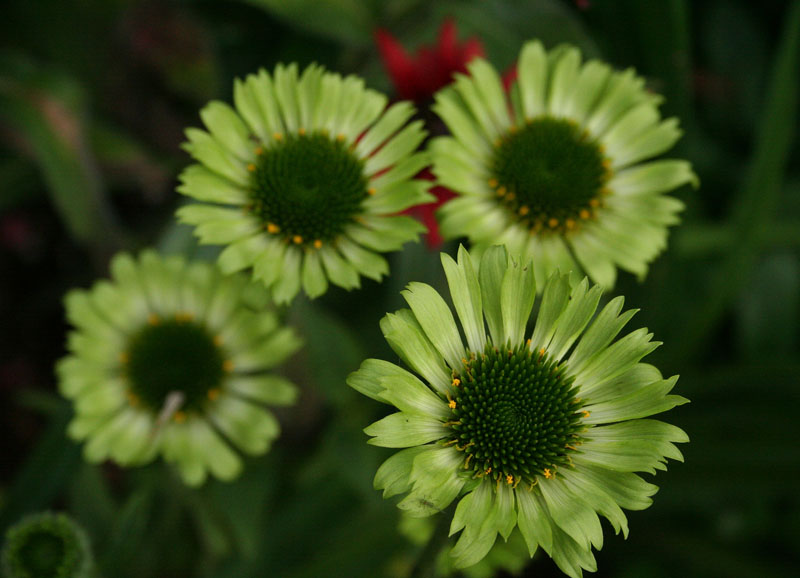 Perhaps no colour in the floral world is more polarizing than the colour green. Many people dislike green flowers, saying they don't show up well enough--others adore them. Put me firmly in the 'adore' camp. Let's kick off the festival with one of my favourite coneflowers, 'Green Jewel'--which is fragrant as well as gorgeously green. One of the arguments of those who don't care for green flowers is that they don't show up against equally green foliage. But many are flushed with white or other colours and that just makes them that much more appealing, in my books. Cool white and fresh green reminds me of snowdrops (also splashed with green on their delicate flowers) and that image is always pleasing to my heart. This is one of the masterworts (Astrantia), 'Star of Heaven'. Described as a white flower, but enough green in it to add it to my list! 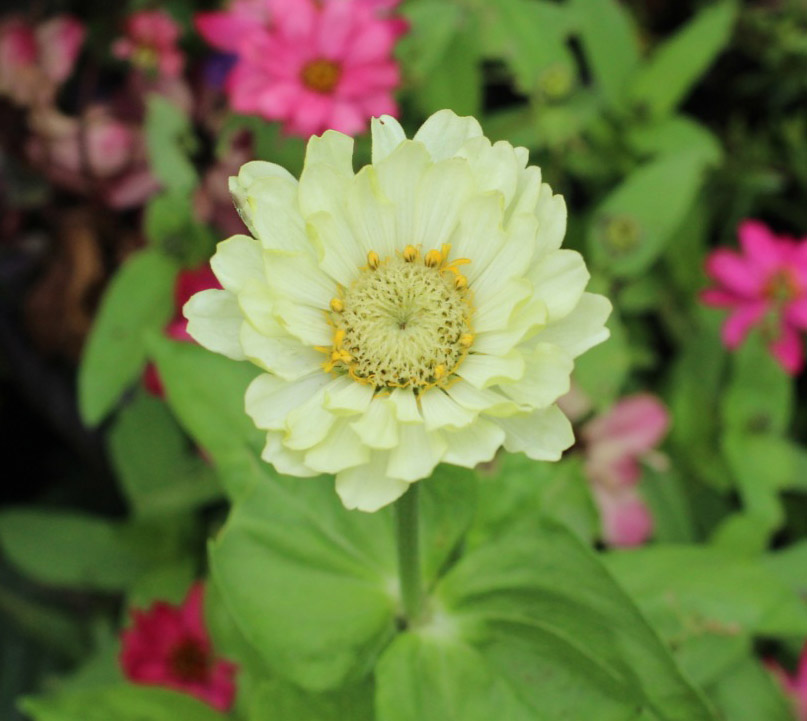 The same goes for 'Envy' zinnia. Not the greenest of flowers, but lots of white in the petals makes for a sharp looking flower. I have my one plant surrounded by other brightly coloured zinnias in hot pink, and they contrast marvelously. 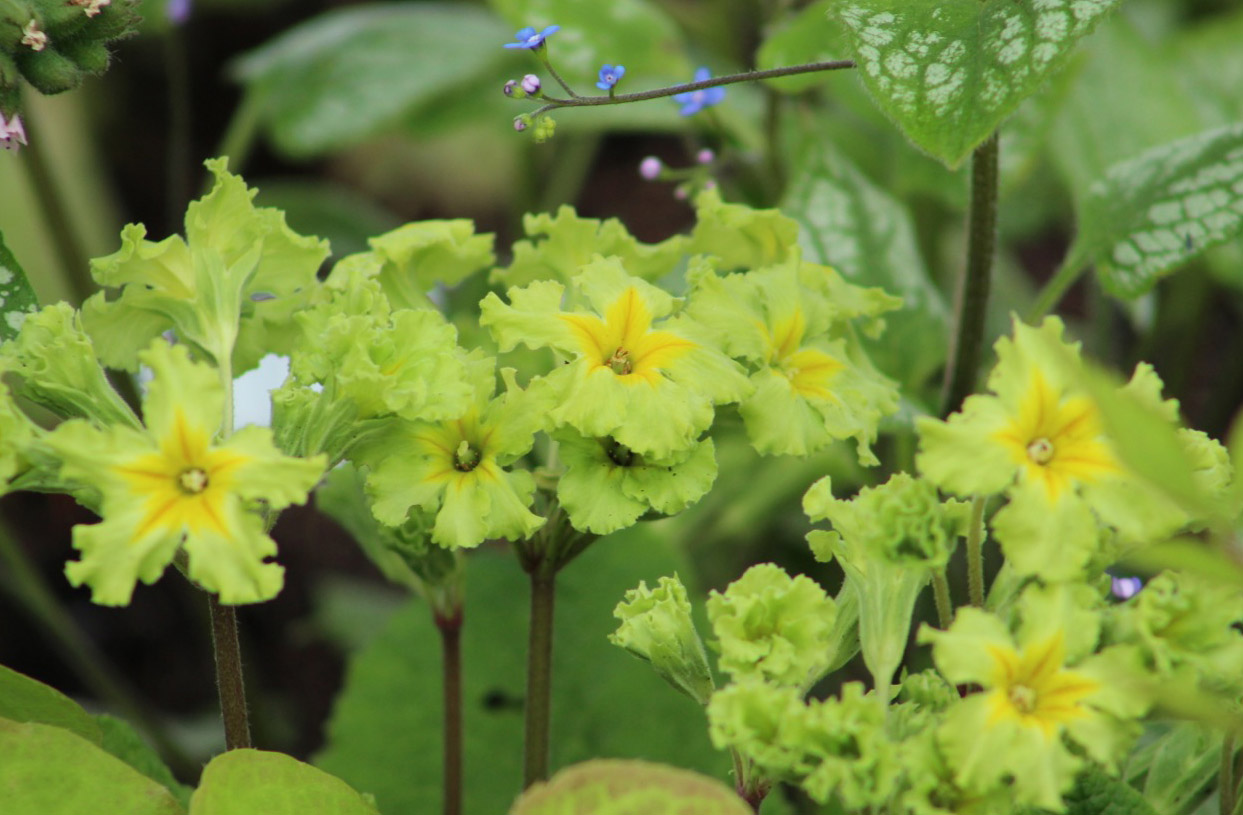 One of the must-have plants I got hold of last year, 'Francesca' primula is a green flowered delight. Not only that, there were STILL flowers on it last week, a little bedraggled by slugs, but it has been blooming since May with the brunnera and pulmonaria, with which it is planted. A very fine performer! 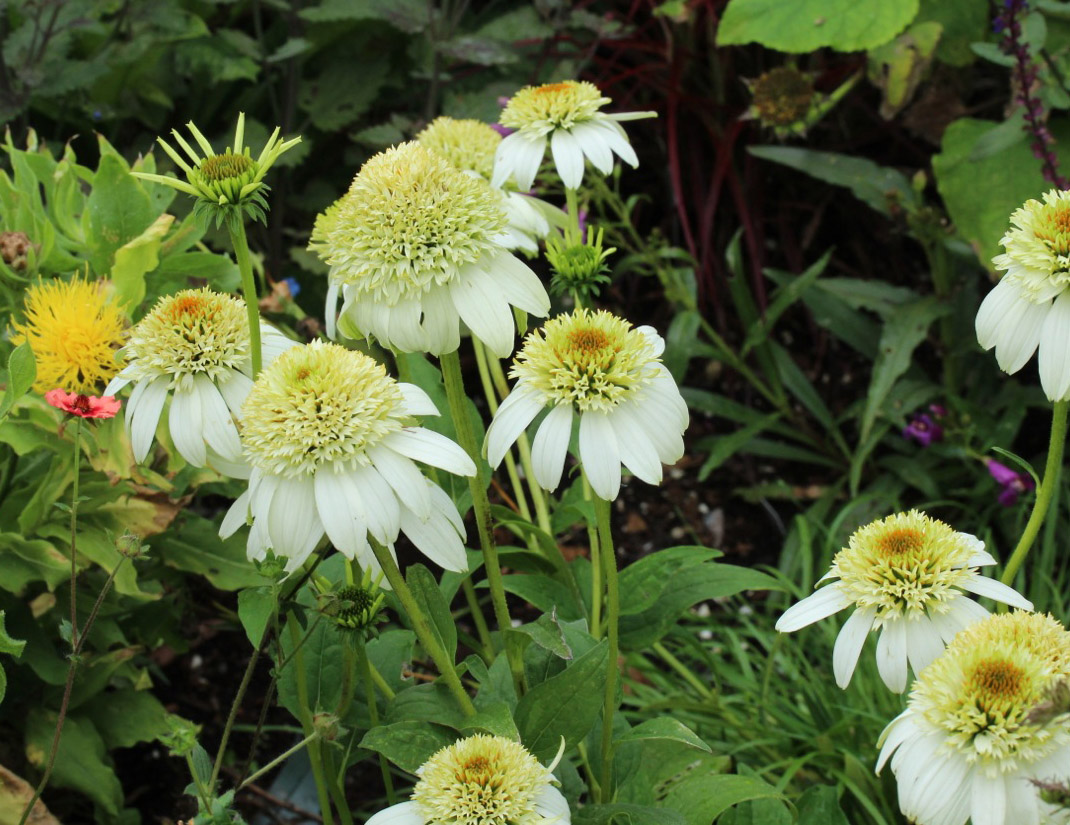 There are a few double coneflowers with green centres, including 'Milkshake' (shown here) and 'Coconut Lime'. As you can see, 'Milkshake' is flowering like gangbusters! 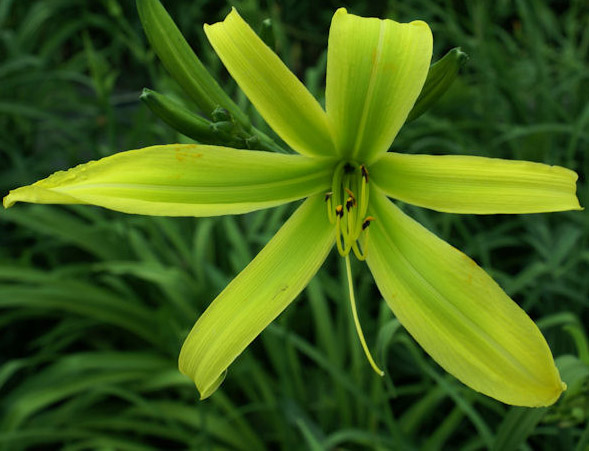 I bought this daylily, 'Green Arrow' this year and it's not yet blooming. But I saw it in bloom at Harbour Breezes and ran across the garden to look at it, and was so pleased I had bought it already from Carol Harvey. It is a tall one too, so it commands attention. 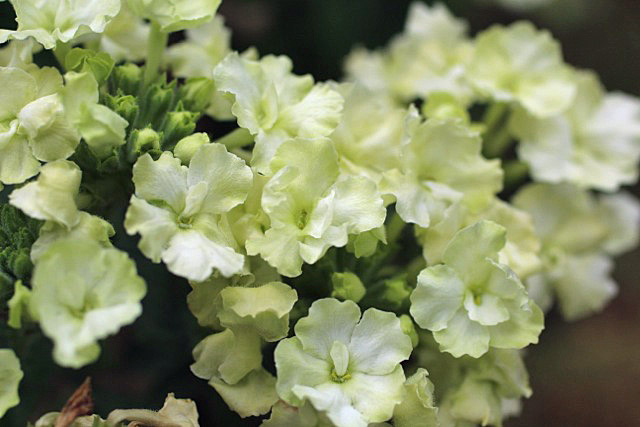 Verbena 'Lanai Lime' is not only delicately flushed with green, the flowers are fragrant. I only discovered this year that some verbena have a wonderful fragrance, especially those in the Lanai series of colours. How happy this makes me! They have a scent like a lighter heliotrope. It's just wonderful. 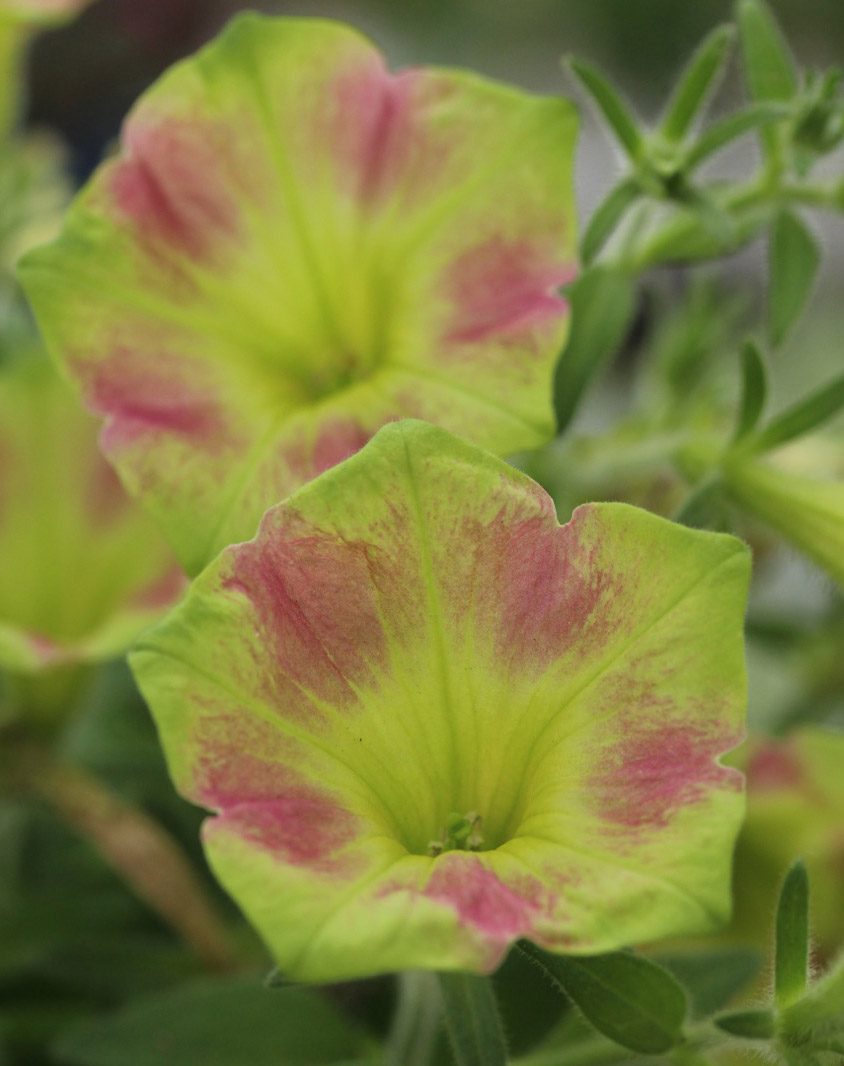 I've never been impressed by the Pretty Much Picasso petunia, however, there is a new series of green petunias called the Kermit series. This one is Kermit 'Piggy', so naturally, with my fondness for Miss Piggy, I had to have it. It has been flowering like gangbusters all summer, too. 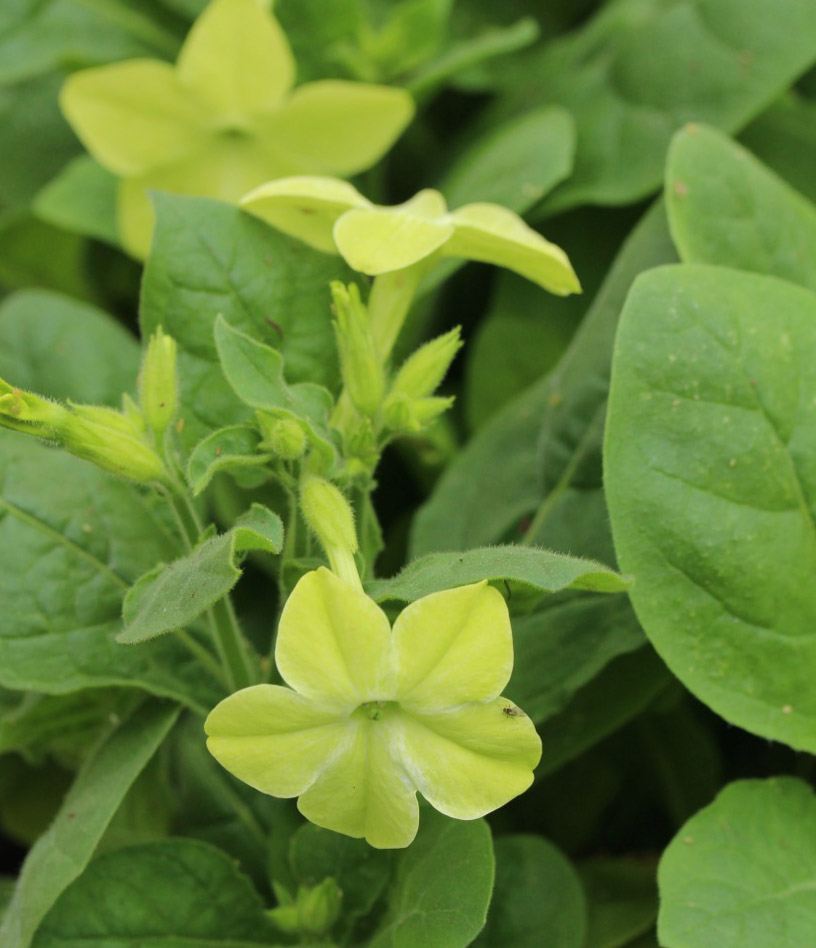 Normally, I like my nicotiana to have scent, like the species N. sylvestris and N. alata. However, I love the green flowered nicotiana, so I have this one from the Starmaker series, Starmaker 'Lime', in several containers and it has been flowering vigourously all summer, too. 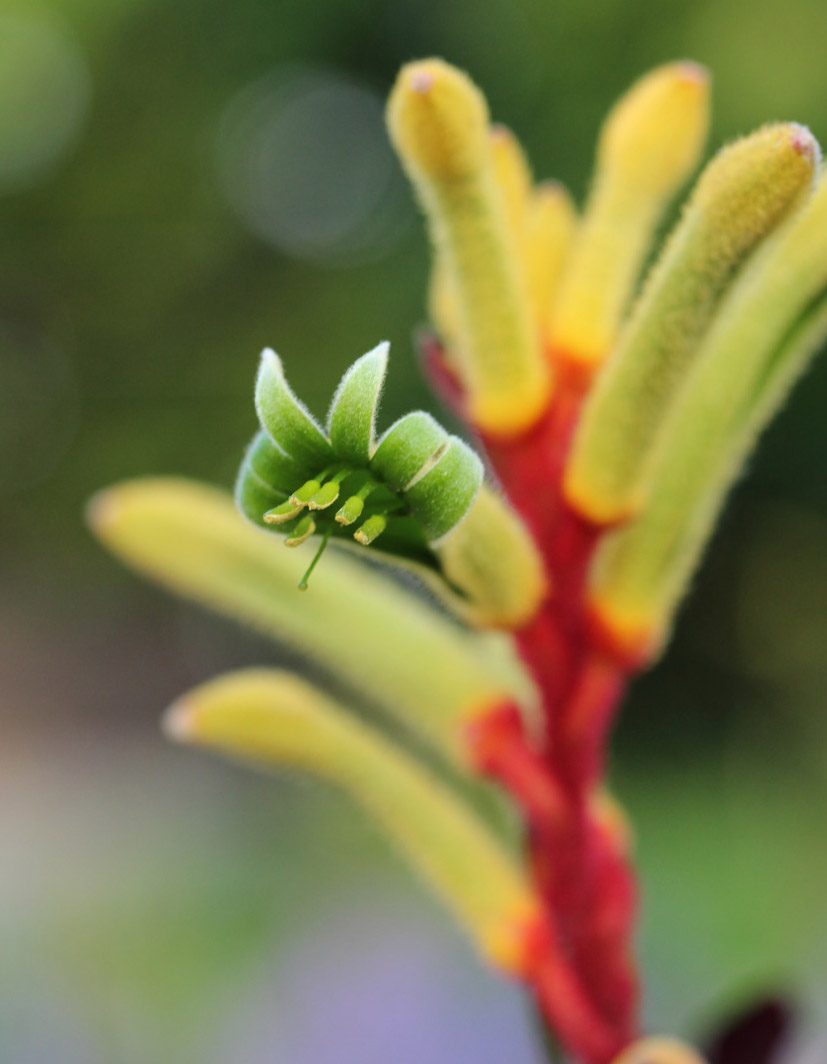 This is an Australian species of plant, Anigozanthos, also known as Kangaroo Paw. It cones in several colour combinations, but this one is my favourite. Red stems, yellow fuzzy flowers on the outside turn to the green blooms on the inside of the petals. I am going to try to overwinter mine inside, so we'll see what happens. 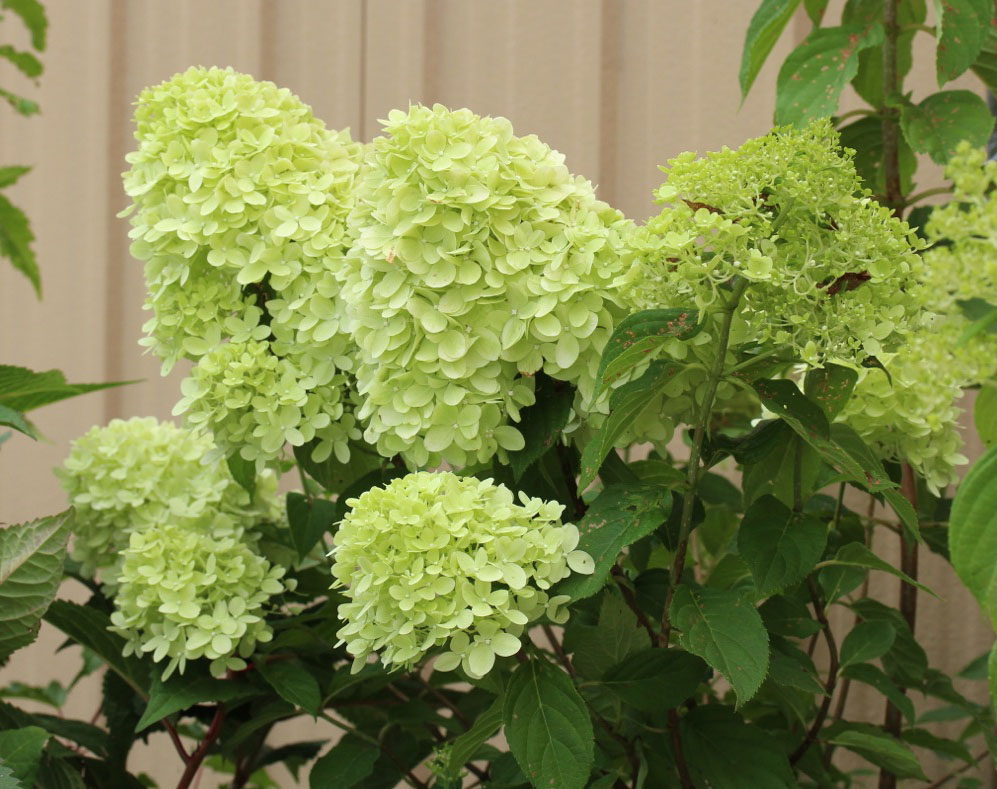 The first green hydrangea to come on the scene a few years ago was the paniculata 'Limelight'. I used to have this and I love its huge flowers, but space is more limited for me now. So instead, I'm going to add... 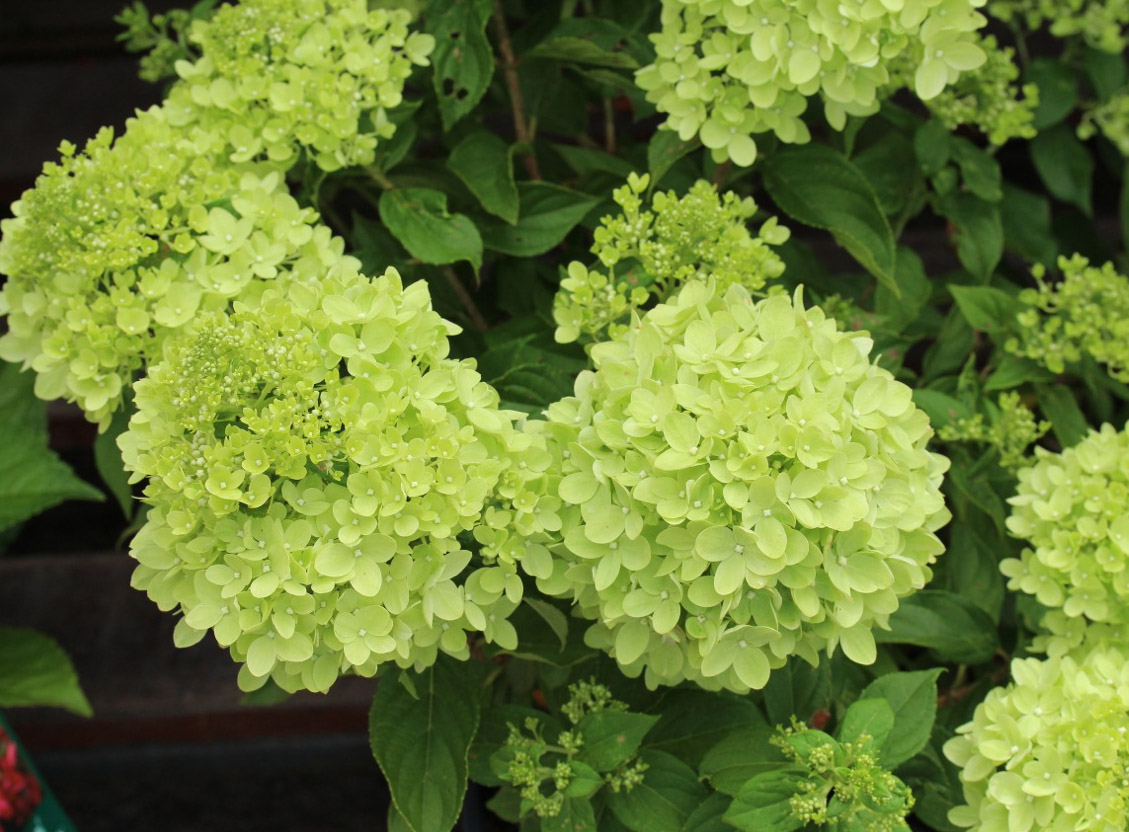 Limelight's little sister, 'Little Lime'. About half the size but hugely floriferous, just smaller flowers. It's one of a number of dwarf form PeeGee type hydrangeas now available, but it's the greenest so naturally I love and have to have it... 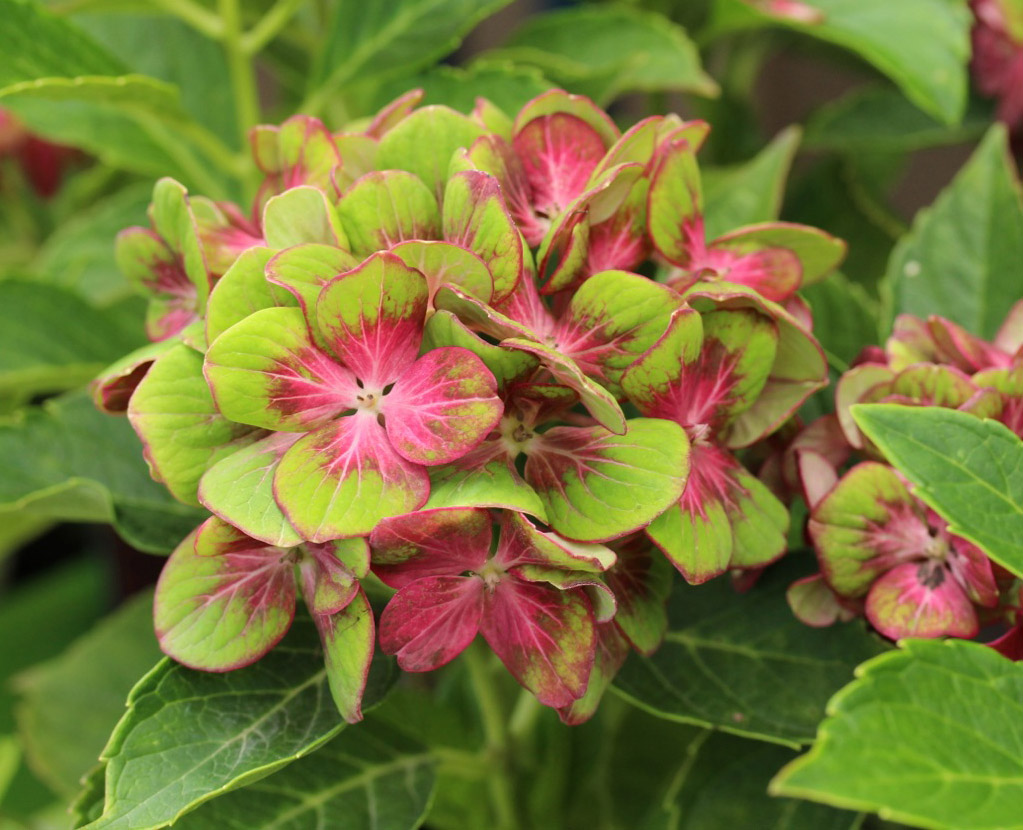 As I love and had to have this strikingly unusual hydrangea, the well named 'Pistachio'. It might be too gaudy for some gardeners, but it certainly solves the problem of green flowers not standing out against foliage, don't you think? It is blooming merrily in my garden now, one of a number of hydrangeas that I had to include in my plantings.

Okay, it's over to you--where do you fall on the green flower fandom? Yea or Nay?