Singing the Blues...of the Garden 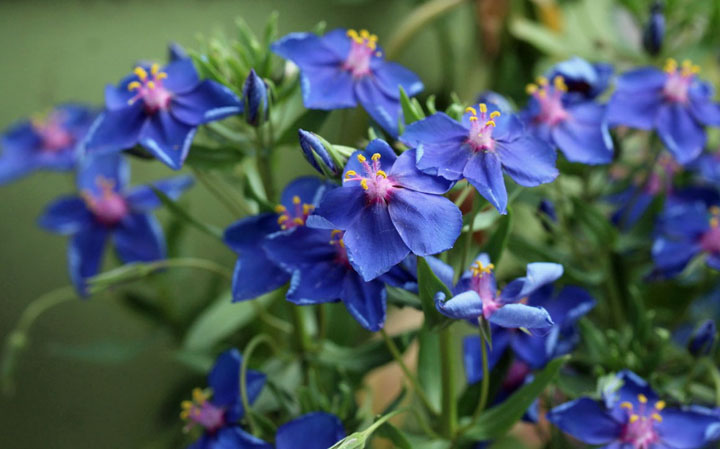 While flowers in any colour are quite lovely and sometimes fantastic, the blue flowers are definitely my absolute favourites. True blue flowers are quite rare, and as anyone who has ever browsed a seed catalogue, a plant website, or a nursery can attest, those who describe flower colours often play fast and loose with what they define as being blue. This flower, blue pimpernel (Anagallis 'Skylover') is for real blue. 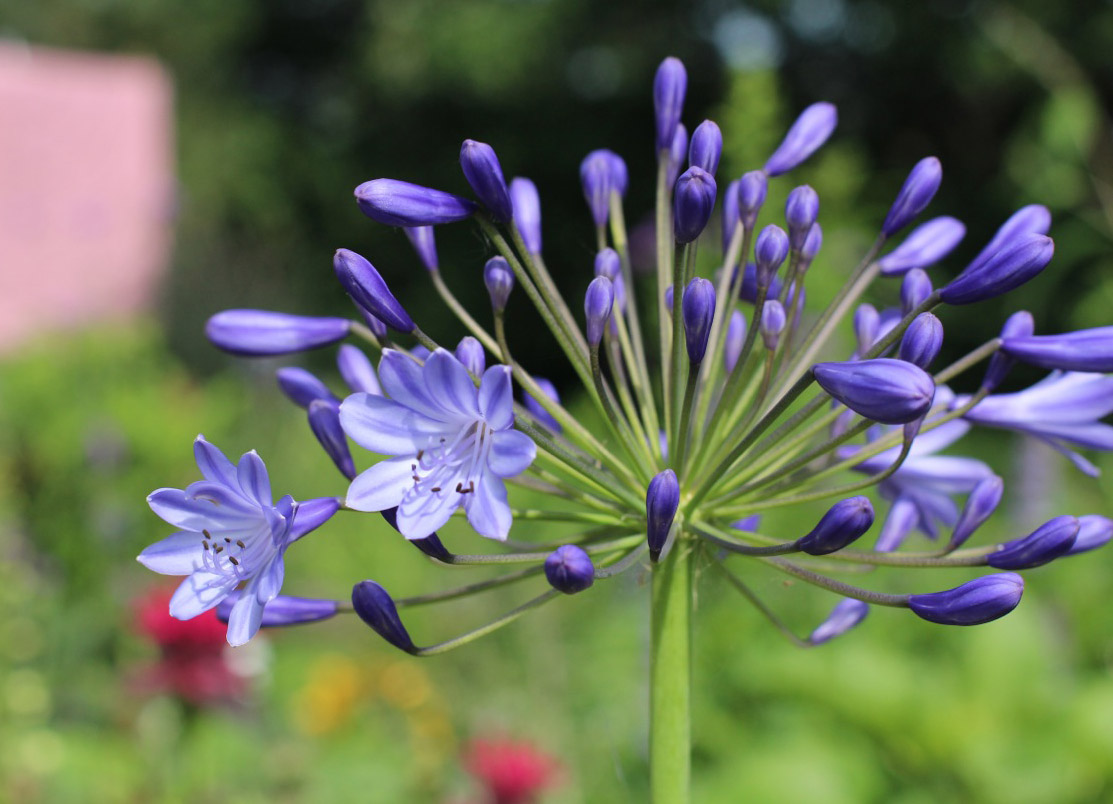 Often, the so-called 'blue' flowers are more purple than they are blue, which is fine because purple is a great colour, but when you have your heart set on something really blue and you get purple...well, it can be a little disappointing. This is an agapanthus, and it's fairly blue, but I see purple tints in those flowers, too. My other agapanthus is white with a blue stripe, and somehow, it seems more blue. Go figure! 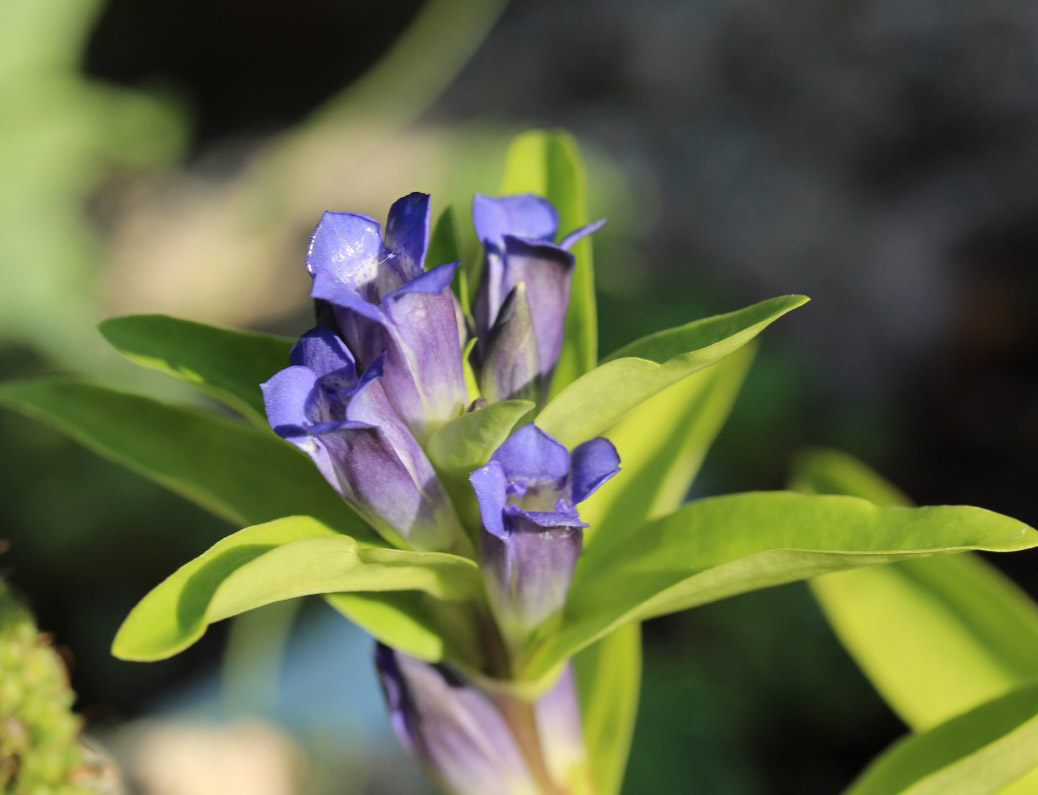 Blue flowers ARE relatively rare. It's estimated that of the 280,000 species of flowering plants that exist, not even 10 percent have blue blossoms. Some, as we know, are affected by soil pH--think of those hydrangeas that can be blue in acid soil, pink in alkaline soil, and absolutely purple in just the right soil. And some don't photograph accurately, depending on the type of light, and the type of camera, and the lens (if applicable). This little bottle gentian (Gentiana andrewsii) is quite blue when you look at it, but the camera was catching something more purple yesterday. 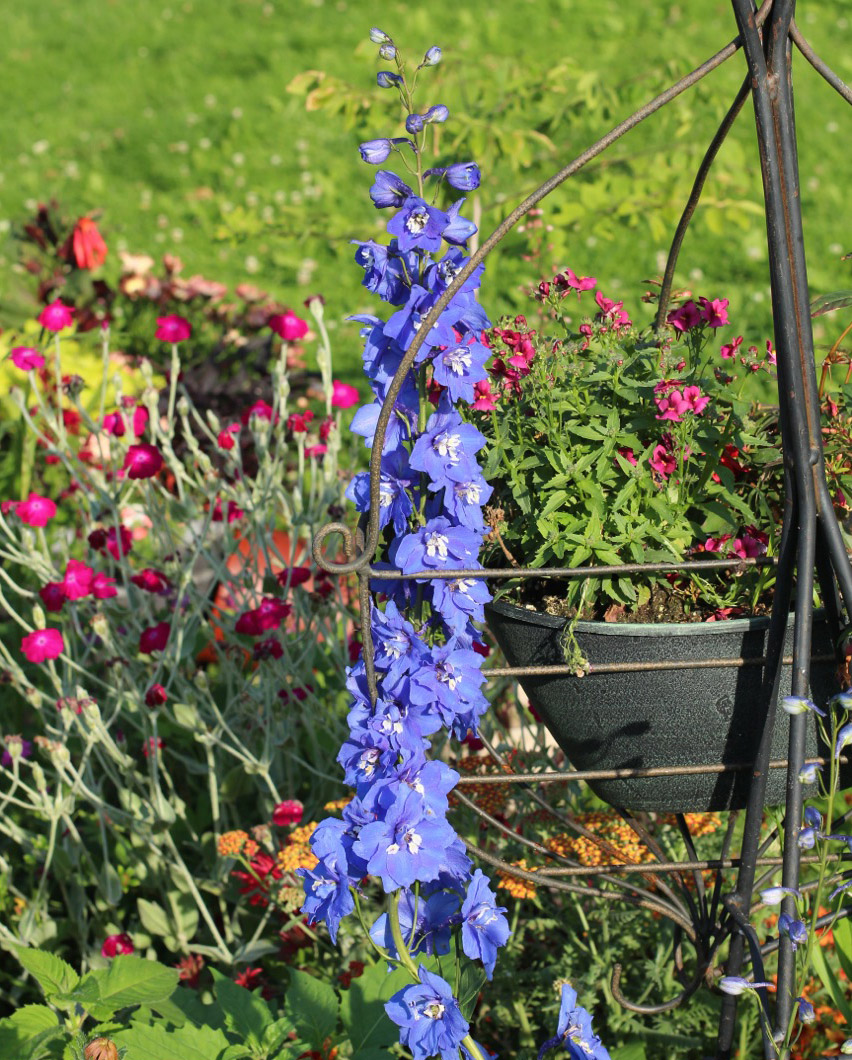 Some of the delphinium are definitely blue, (like this cobalt blue one which is called 'Aurora Blue') although there can be other shades mixed in with them. The pigment that makes their flowers blue is actually an anthocyanidin and antioxidant called delphinidin. You can learn more about blue flowers, and the science of them, from a wonderful book by Robert Geneve called A Book of Blue Flowers. I bought this book some years back and have kept it in my permanent library. 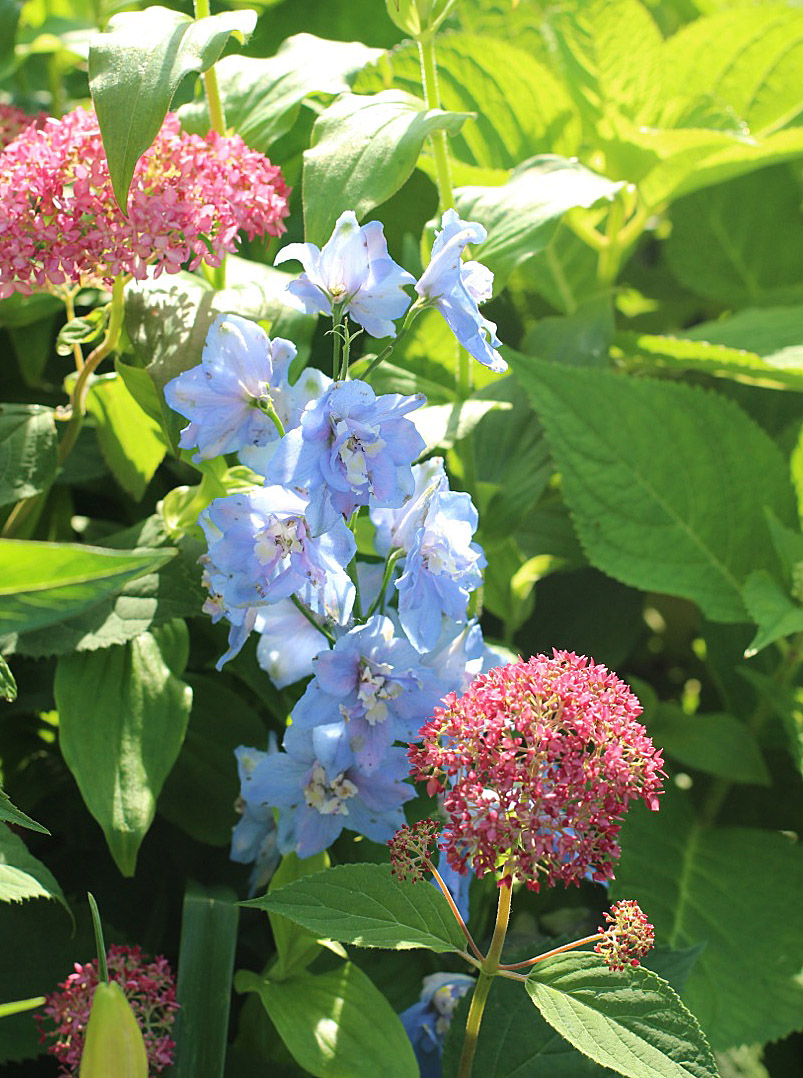 And this, I believe is Delphinium 'Summer Skies'. The only reason I'm hesitating is because I put about a dozen delphinium plants in this year, in shades of cobalt, deep purple, periwinkle blue and white. Some of them were in a flat of mixed colours...So this might be 'Magic Fountains Sky Blue with Eye.' Either way, it's wonderful. 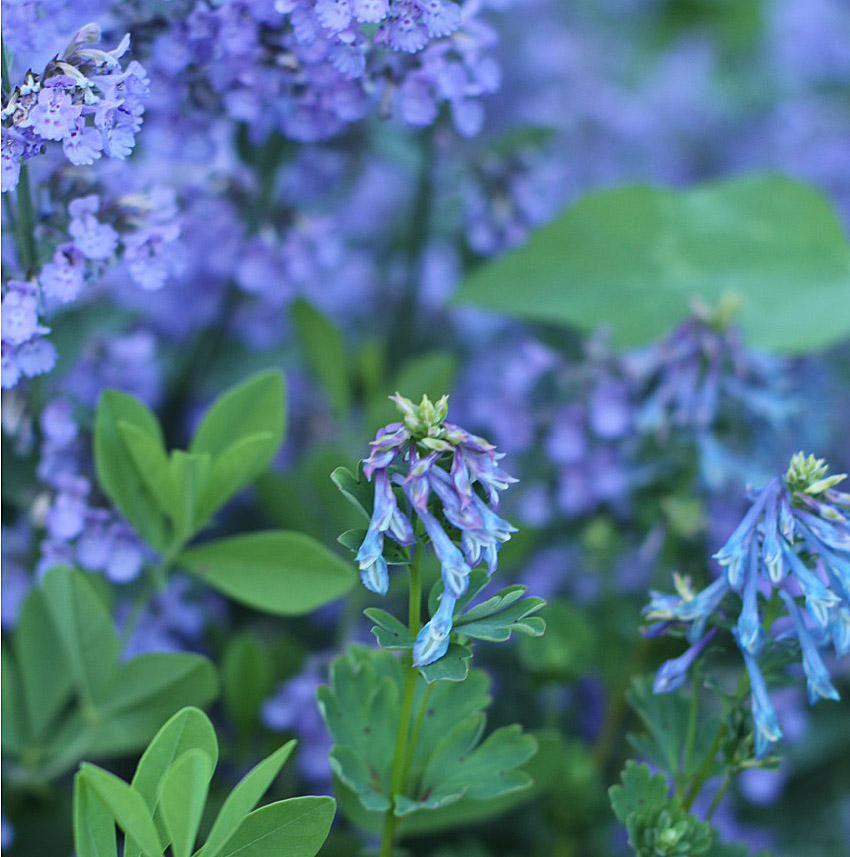 Most people get really frustrated with trying to grow blue poppies, and I can understand that because they are divas and very particular. But if you can grow bleeding hearts, you should be able to grow Corydalis elata, which seems to be the hardiest of the blue flowered corydalis species and is a great plant. Its flowers are also fragrant and it blooms for weeks, unlike that poppy. (Kylee, I'm trying to be helpful, here! ) 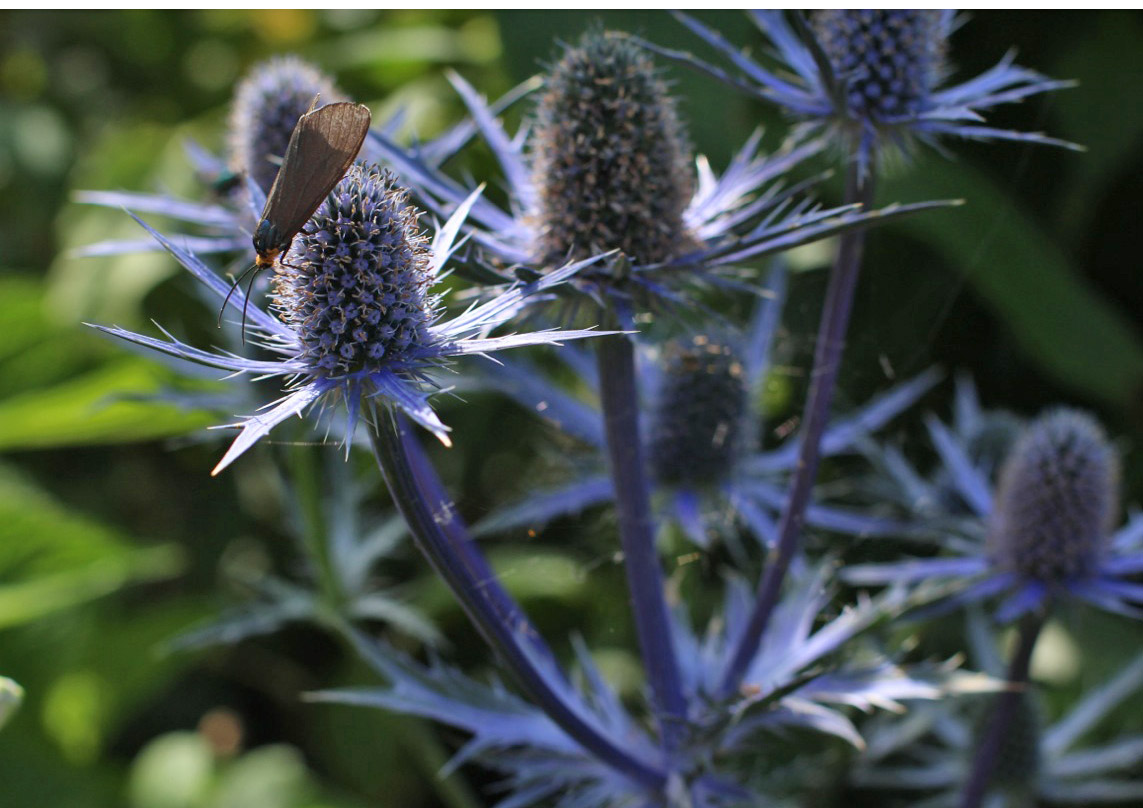 I am besotted with sea hollies, as are many pollinators. The Virginia ctenucha moth is perched on Eryngium 'Big Blue', which is really well named because it's a nice robust plant with a LOT of good sized flowers (about 3 times the size of the flowers on E. planum) and they are silvery-blue. As an added bonus, the stems and bracts are also blue. 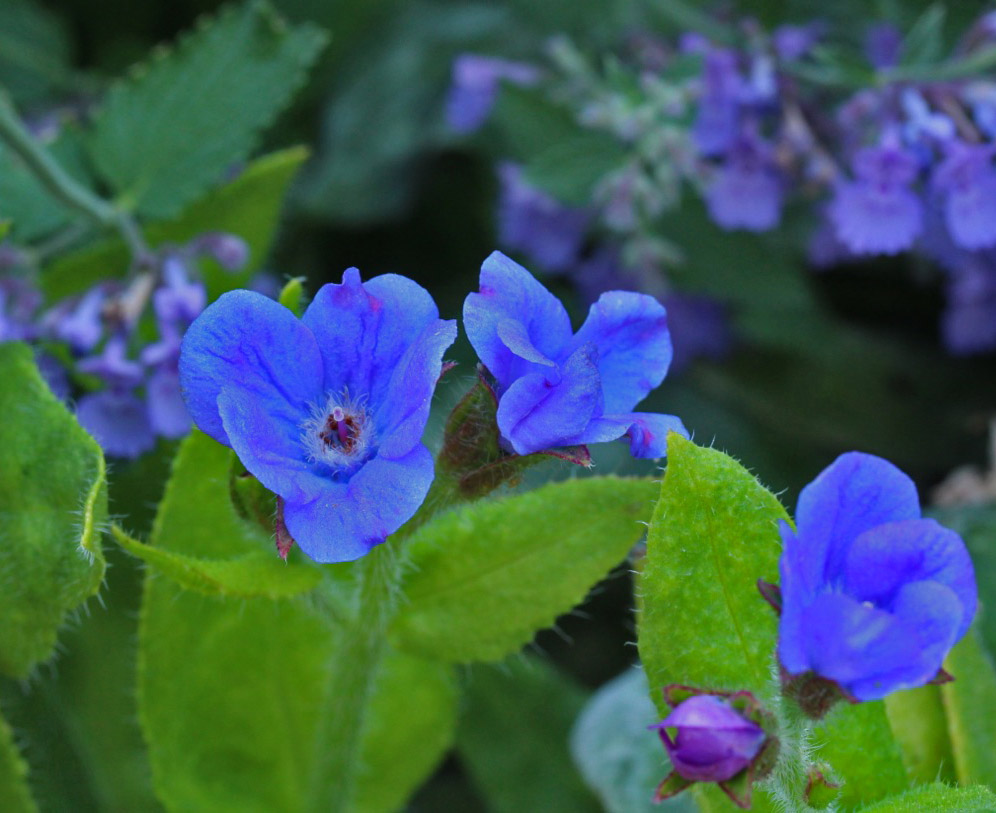 I've mentioned Anchusa before, which like Lithodora, a relative, is one of my love them and leave them plants. If it overwinters, great, but it never has yet for me, and it usually melts down in mid August. But it flowers enthusiastically with deep cobalt blue flowers (they aren't showing up their proper colour here) from May until it wears itself out, so I figure I can just treat it like an annual and enjoy it. 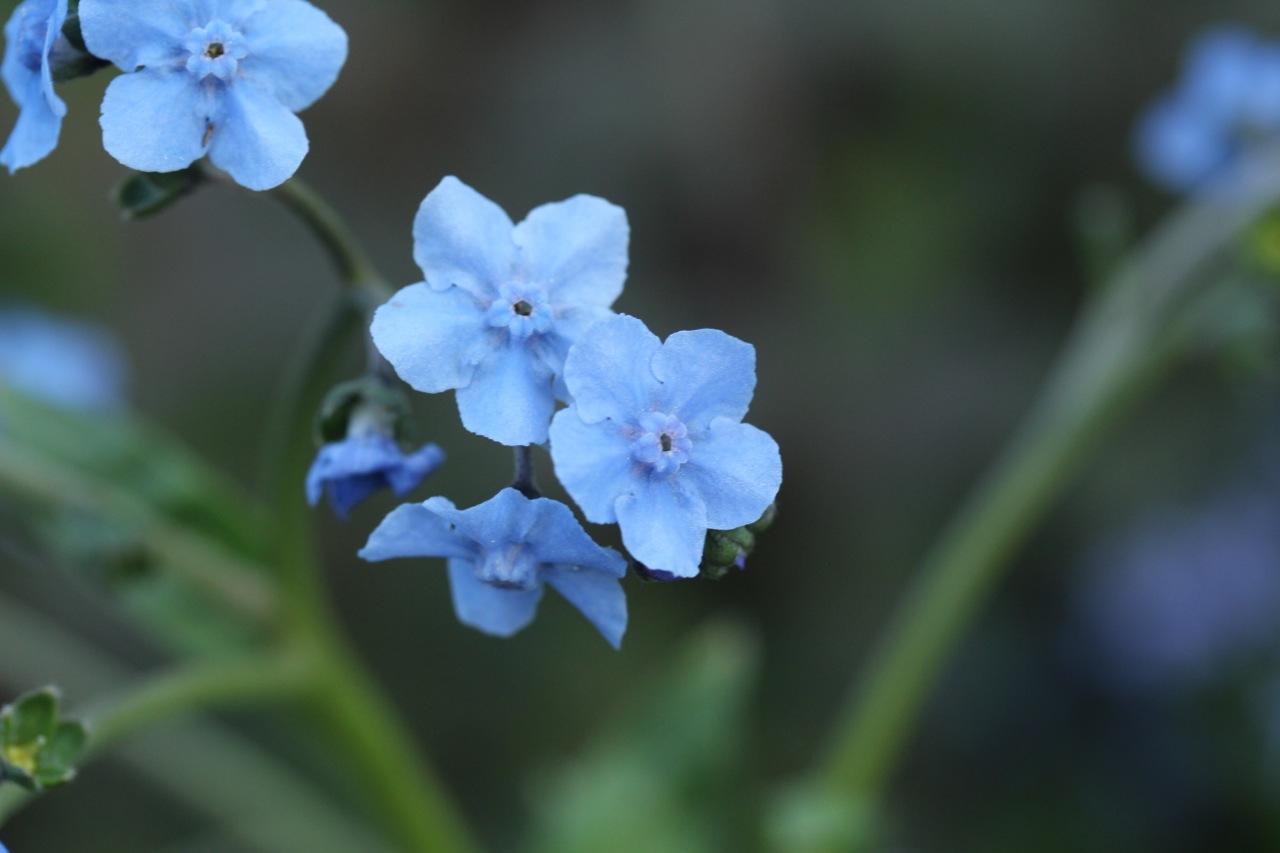 I know that Cynoglossum is a weedy plant in other parts of the world, but here in Nova Scotia, it behaves as an annual, and sometimes selfseeds a little, but never enough to be annoying. Its flowers are about 4 times the size of forgetmenots, and it's still blooming because I have been deadheading it. 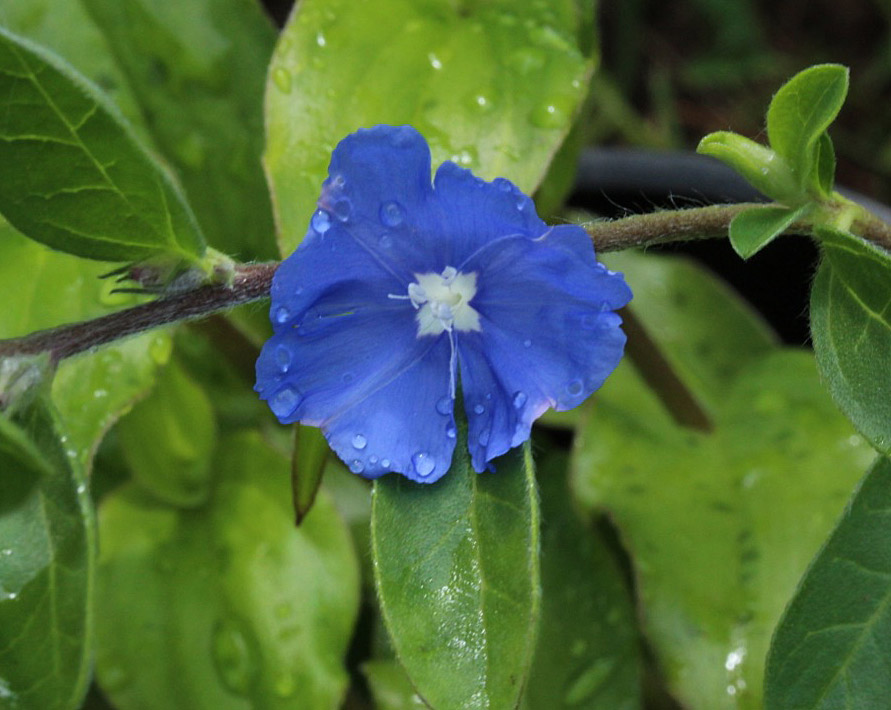 This is Evolvulus 'Blue Daze', which I discovered when I went to look up the genus spelling is also called Hawaiian Blue Eyes. Which I find charming! It's like a miniature 'Heavenly Blue' morning glory (which I also have but which isn't flowering yet), and I have successfully overwintered it indoors as a houseplant in the past, until I got busy and forgot to water it. Oddly, plants hate it when you don't water them for weeks on end. 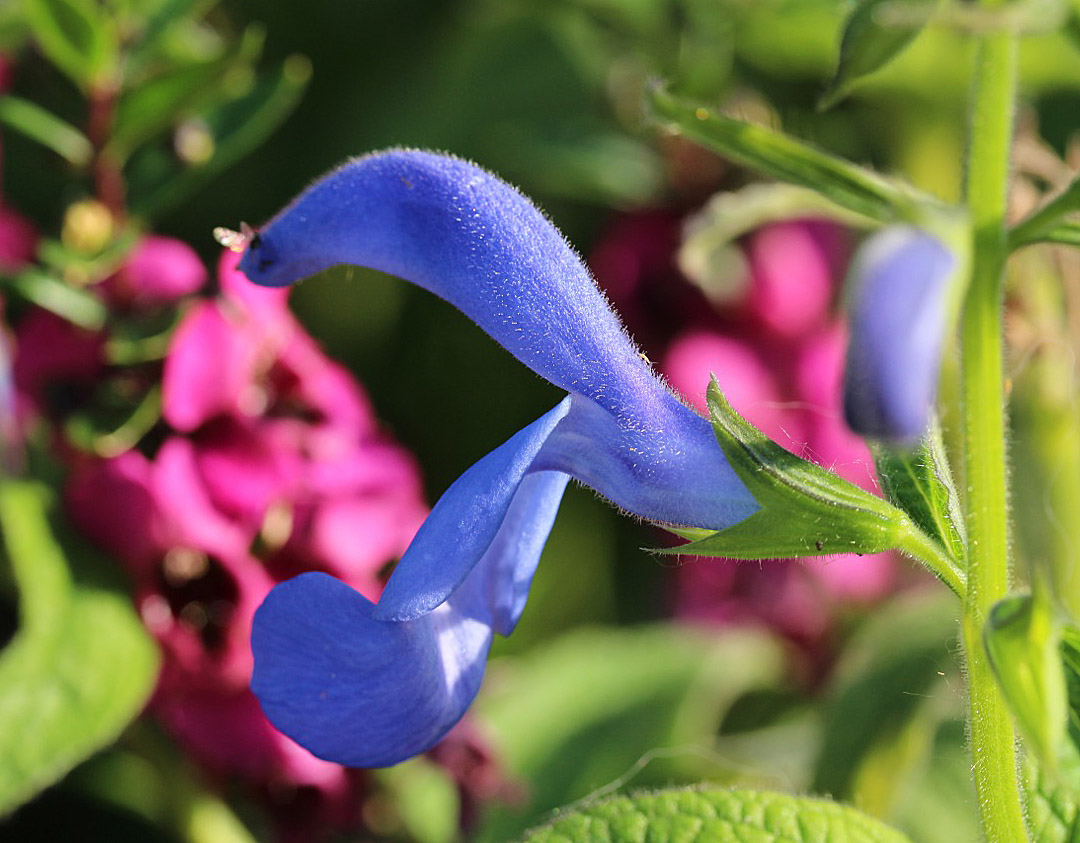 I really like blue salvias, even when they are purple instead of truly blue, but this beauty is truly blue. It's Salvia patens, I THINK it's Oceana Blue, but it might be a different cultivar. I bought a couple of them for 2 bucks each at a plant place that I won't mention the name of because this year their plants mostly looked terrible, like they were starving to death. My plants responded to being put in good potting soil and fed SeaBoost, and they are flowering really well. And so blue! 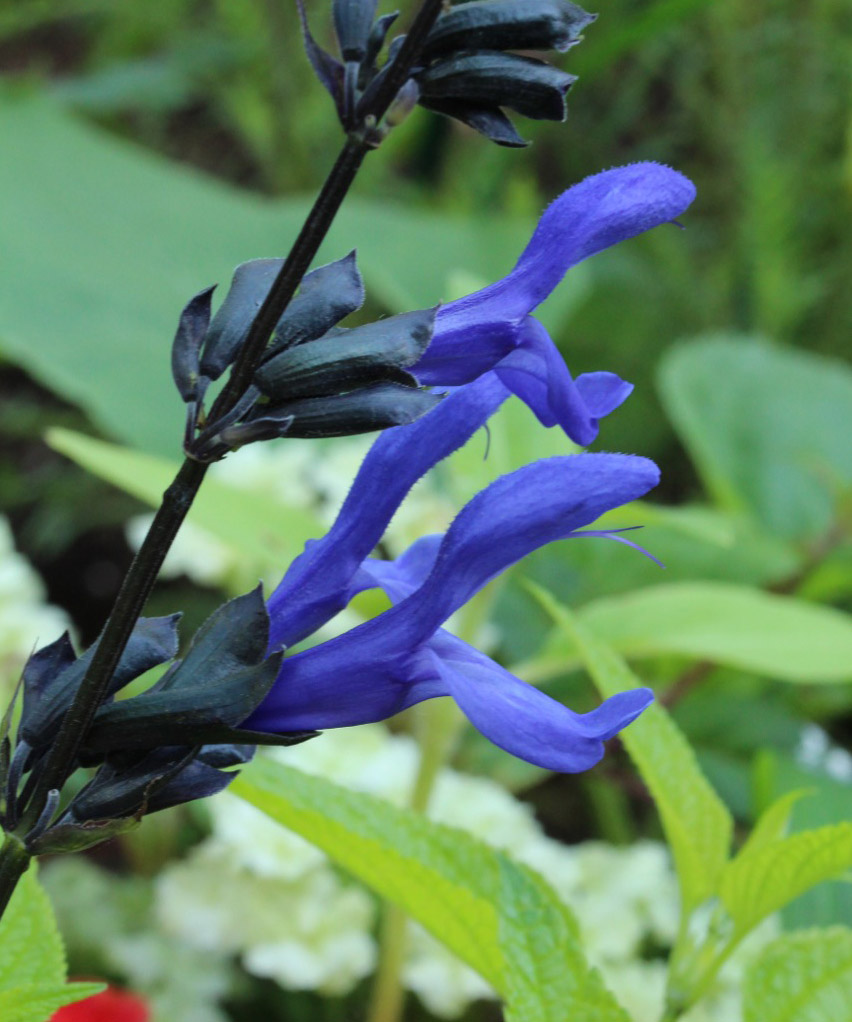 The champion of blue salvias, though, has to be 'Black and Blue'. The blue flowers are fantastic, and once the plant settles and gets used to the weather, it will flower until a hard frost. Add its bright green foliage and those black stems and bracts and you can see why it's a true-blue winner in my books. 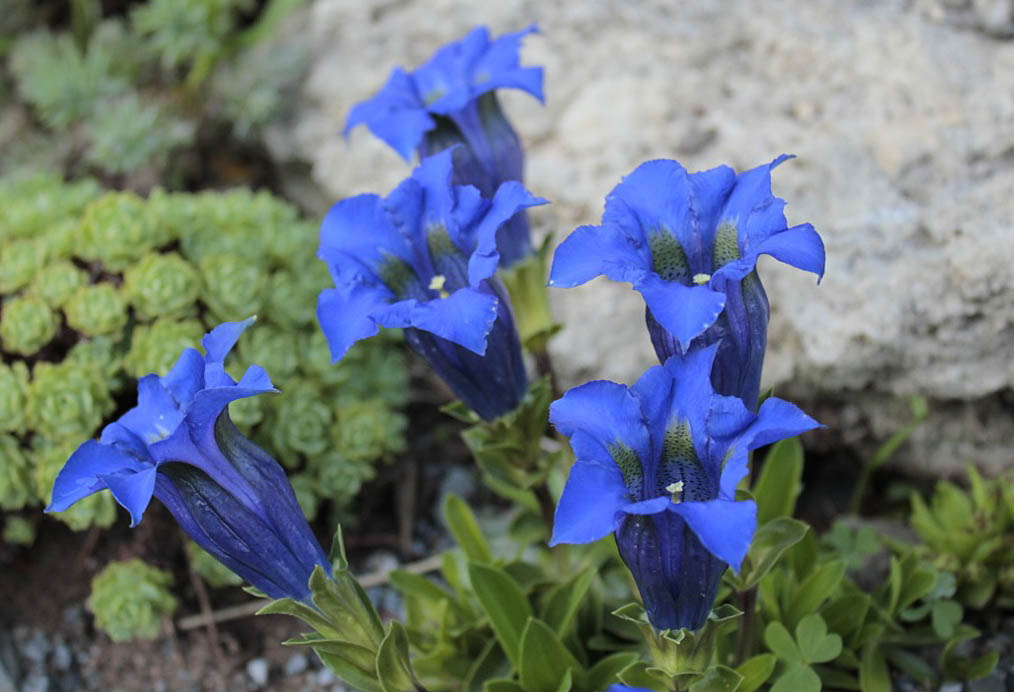 I mentioned the bottle gentian up top, which is in bloom now, and I thought I'd also offer up the spring-blooming Gentiana acaulis, which is my favourite gentian and which bloomed modestly this year in its new garden spot. But stay tuned--There are at least half a dozen other gentian species and cultivars out in my garden, yet to bloom, and they'll warrant their own post, coming soon.

What's singing the blues in your garden?